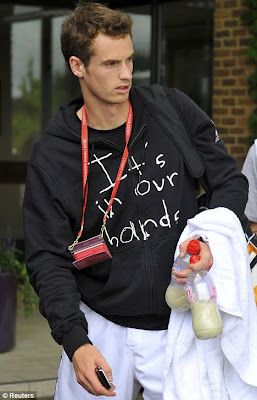 I think everyone has one sport that they are not merely indifferent to but view with a real sense of hostility. For the rabbit, it's tennis. Happily, apart from Wimbledon fortnight this buttock clenchingly uninteresting activity barely shows on the radar in the British media. However, once Wimblebore kicks off (as it were) saturation coverage of events in SW19 make substantial parts of television, radio and newspapers a no go area for any sensible person for two weeks. One tiresome media set piece to be wheeleed out every year is how far the latest great British hopeful will go. The usual answer is 'not very'. This year there is no English competitor in the men's singles. Yup. We're that bad.

There is however one British competiotor in the men's singles who is apparently rather good at this pointless activity. He is called Andy Murray and he is a Scot. He dug a huge hole for himself at the time of the last (football) World Cup by saying that his preferred winner was 'anyone but England'. He said this was a joke but it was not well received south of the border. Arsey Scot! Thought the population of England. Thus when Murray does well he is British, when he loses he is a Scots git. He is never going to persuade the population of England to love him.

So what? I hear you cry.

Well the latest piece of manufactured outrage is that Murray has not committed himself to bowing to the Queen at Wimbledon. Apparently she is showing up to Wimblebore for the first time in 33 years (not that I blame her for skipping it). The right wing press is all of a lather, laying heavy emphasis on his Scottishness. Bowing is now apparently optional and our man is at least so far studiedly noncommital on the topic. Cue a lot of manufactured indignation.

For what it may be worth, the rabbit has no particular difficulty with ceremonial unlike many of similar general persuasion. It does no harm and can add to the gaiety of nations. In particular the rabbit has no problem with the idea of bowing at someone who bows back. This shows - okay in a quaint and archaic way - an equality of respect. The Queen doesn't bow back. It's an unequal subject to monarch thing. On this basis, if the republican rabbit were Murray he wouldn't bow to the Queen either. Nothing personal...
Below by remarkable coincidence is an etching of the execution of Charles I. Which was a touch personal. 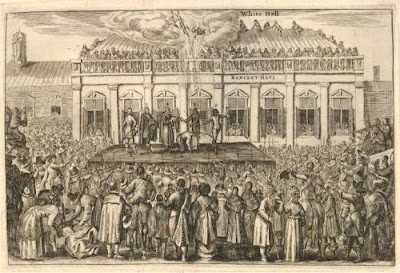 call me old school, sugar, but just as i stand when someone older enters a room, i would give the appropriate respect to the queen of england. (but notice, i didn't capitalize queen) (yeah, i'm a rebel like that.) xoxoxox

Not being a British subject, The Maven won't comment on the monarch thingy...but She will say that tennis is an acquired taste and it certainly helps when the players are handsome and charismatic!

But I would bend over for a cute boy

Maven - I'll never acquire it. This much I know.

Who cares about tennis when the footy is on?

Personally I find tennis and 'footy' extremely dull. I want so much to like soccer but man alive. That buzzing sound you hear may not be the vuvuzelas, but my snoring.

Don't ever get Brian started on his rant about bowing to the Queen, ad nauseum. He used to get apoplectic when we'd watch a Canadian [drama] show about the criminal courts in Toronto, called "This is Wonderland", and the Judges were addressed as "your worship".

JoJo - So THAT'S what that noise is. All becomes clear. Your worship is only used by no account lawyers and cops to no account magistrates. Proper judges have other titles...