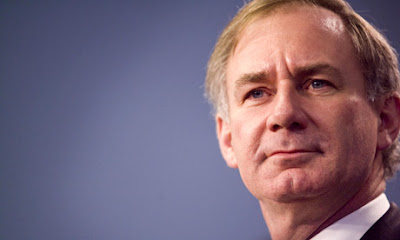 It has to be said that, despite visceral Toryphobia, there are certain prominent members of the previous dispensation that the rabbit will not miss one one little bit. Prominent among these is Geoff 'Buff' Hoon - estwhile secretary of state for defence and one of the biggest dickheads ever to draw breath (it's good this blogging, you can forget normal constraints and just come out with it).

Hoon achieved notoriety some months ago when along with retiring Labour big bugs Patricia Hewitt and Stephen Byers he was caught trying to blag a £3,000 a day gig as a lobbyist. Oink! This is contrary by the rules by the way and 'Buff' was distraught at the affront to his diignity arising out of learning of his suspension from the Labour Party on the television news.

The suspicion arose that the suspension was revenge for the most hopeless coup attempt in history by 'Buff' and Hewitt when they tried to oust Brown at the beginning of the year with the support of absolutely no-one at all. I mean, you'd really take a lot of notice of this pair, wouldn't you? well of course...
Now 'Buff' has appeared before the inquiry into the death of an Iraqi, Baha Mousa in his capacity as former secretary of state for defence. Mousa died after sustaining 93 injuries while being detained by soldiers from the former Queen's Lancashire regiment in southern Iraq in September 2003 on Hoon's watch. 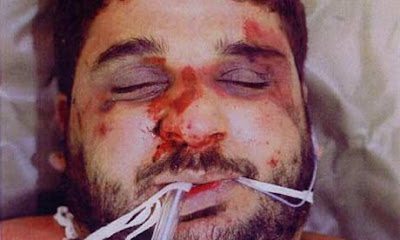 The inquiry had seen video footage of a British soldier verbally abusing Iraqi detainees. This footage is hugely in the public arena. It has inevitably even been on YouTube. These events happened on Hoon's watch as Defence Secretary. Hoon pitches up at the inquiry. Not unreasonably, counsel to the inquiry assumes that Hoon has seen the footage.

Counsel to the inquiry expresses some surprise.

Then Hoon raises a concern as to the genuineness of the footage.

It is explained to this prize pillock that theer is no doubt as to the authenticity of this footage.

Happily Hoon is now out of the House of Commons and political life. One can only declare one's pleasure. On a cheerier note, Laci the Chinese Crested (link to left) tips the rabbit off that Banksy may have been caught at it. Follow the link and have a good weekend. the rabbit is hopping off to London Town. Have some more Howling Wolf as a parting shot - Spoonful to be exact.

In a just world Hoon would be facing a war-crimes trial along with Blair and his other accomplices for his part in taking Britain into the illegal Iraq war.