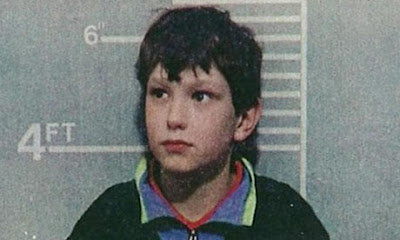 With the usual apology for dragging law into things, the rabbit confesses himself somewhat troubled as regards what is happening in the Jon Venables case. For overseas readers, Jon Venables (above following arrest as follows) and another boy called Robert Thompson when aged 10 abducted and killed a two year old named James Bulger in 1993. The abduction was partly caught on cctv and makes chilling viewing. There was understandable shock and horror that children could do such a wicked thing. They were above the age of criminal responsibility and were tried and convicted of murder. Controversially, they were released on licence in 2001 and given new identities. To the outrage of the gutter press - which wanted their heads on a plate - they were given the benefit of anonymity orders which attract criminal sanctions for breach.

Thompson seems to have disappeared into obscurity. So did Venables until recently. He was arrested on child pornography charges and recalled to prison. He is now 27. The nature of the charges were not in the public arena until queen's counsel instructed by the DPP applied to Mr Justice Bean to have injunctions prohibiting the nature of the charges being reported lifted. He was successful and then read out the chargesin open court. They are very specific as to the number of images (a) possessed and (b) 'distributed'. Venables is to attend a plea and case management hearing at the Old Bailey via prison videolink on the 23rd July. Some questions arise.

Do the powers that be seriously propose to try him at the Bailey - a murder and terrorism factory where such a case as his would stick out like a sore thumb?

Under what name is he to be prosecuted? Jon Venables? (a touch prejudicial). His current identity? Thus destroying it and necessitating a third identity when he is eventually let out again as surely he will be.

If the latter, what are the chances of a jury working out that the person being tried before them for 57 indecent images and distributing 7 of them is actually Venables? Clue: high.

I have no idea what his pleas will be. If they are 'guilty' then all of this is academic save in relation to consequences in prison given his notoriety, the nature of the current offences and the publicity generated making him a prime candidate for being identified.

If however he pleads 'not guilty' then I can't see how he will get a fair trial. None of this detracts from the horror of what he did as a 10 year old. It's really about what the Americans call due process. Why did the DPP apply to have the injunction discharged at this stage? Running scared of the press and feeling they have to be tossed a bone?

Fascinating. Do keep us posted.

Of course, in Arizona they probably would have tried him as an adult the first time around. You Brits sure are a civilized lot, I'll say that.

I was amazed it had been so long ago. If what is claimed is true then this is still one utterly disturbed individual. I had never thought of the problems that are now unfolding in the light of the judges decision and of course, as is your skill WR, you are correct on all points. It would be very difficult for me to sit in court and not have a preconceived perception.

You don't want to know what I think.

They never should have let that little psychopath and his friend out of prison. I was shocked that they were released a few years ago. I don't care how young they were when they committed that crime, which I remember clearly. If the other kid is living a quiet life then fine, but Venables is clearly one twisted little monkey. Throw him back in prison and throw away the key. So what if he can't get a fair trial? He had the opportunity to turn his life around and he blew it. Too bad, so sad.

Mikle - He was tried in the Crown Court as the only court that could try a murder case but with a lot of the usual dispensed with.

Findon - I can only conclude that the powers that be have made a very difficult situation hopeless by the noise theyb have made/allowed to be made on the topic.

Little Flower/JoJo - It's not about sympathy for him - I just think the principle of a fair trial applies to the worst of us and that the present mess was avoidable.

A Wider Issue Is The Power That The Gutter Press seem to have in so many aspects of all Our lives here in the UK.

You are right Rabbit. It's just that the system are so f--ed up in general that I get extra frustrated when I hear these things.

Actually, I think that most if not all criminal behavior comes from some form of insanity or disconnect, and therefore there should be no prisons, only rehab centers... but that's another story for another time. This kid should never have walked. He should have been required to stay in therapy and his parents should have been investigated for abuse.

I have been reading the news reports online about this. I was familiar with the case because I am somewhat of a true crime fan. For some reason, the photo of Venables as a child haunts me. Something about his eyes.