Why the World Cup is rubbish (so far anyway) 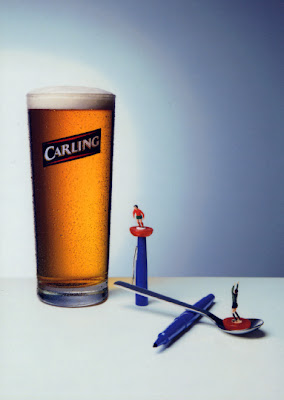 The rabbit has touched on this already as regards the quality of the games (or lack thereof). I have seen little subsequently to change my mind that we are witnessing one paced, negative, fearful football - fear of losing paralyses everything else. Even Brazil struggled to put on much of a show against the might of - erm - North Korea. Okay they won 2-1 in the end but with a lot of dross en route.

Carling lager (for overseas readers think diluted chilled horse piss) advertise their wares in drossy tabloid newspapers thus enhancing revenues for drossy tabloid newspapers who convince their readers it is their patriotic duty to hoover away a lot of nasty beer in front of the tv while the matches are on. This is a way of demonstrating their patriotism. As is hanging a load of Cross of St George flags out of their windows, preferably emblazoned with the word 'ENGLAND' across the horizontal bar by way of explanation for the terminally hard of thinking. Or alternatively including the legend The Sun strategically placed on the national flag. The rabbit pauses to beat his head against the wall.

Meanwhile, the patriots dutifully head down Tescos (God help us 'official supermarket' of the Wortd Cup or England team or something) and load up their car boots with Carling horse piss and drive off with a brace of small Cross of St George flags attached to their vehicles.

The rabbit mentions this having read a bizarre story from the current World Cup. There is a Dutch beer called Bavaria. Don't ask me why a Dutch beer is so named but it is. The naughty Dutch brewery did what is apparently known as ambush marketing. Thirty-six Dutch women were arrested after the Netherlands-Denmark match. Why? Hooligan acts? Invading the pitch? Danish pastry abuse? Nope. Arrested under the Contravention of Merchandise Marks Act (sic). They wore nothing to identify the above mentioned beer. They were dressed in plain orange - the Dutch national colour, allegedly paid for the brewery who have not paid Danegeld to FIFA.

'We view ambush marketing in a very serious light and we urge people not to embark on these ambush campaigns', blethered some idiot copper.

Have they really nothing better to do? For example reducing the jaw droppingly high South African murder rate 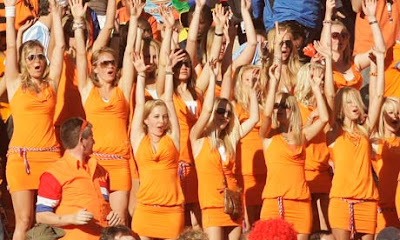 Yeah, I was reading about this earlier. Silly, silly, silly.

One of those flags of a very large size appeared in my neighbors' window at the start of the World Cup games. They recently moved here from England. Not certain why they chose to live in our little US prairie town. The flag did cause some consternation for the local gossip mongers, but they finally figured it out.

A wee bit Bah Humbug there WR. It is a fine World Cup, with some good games so far, everyone always starts off by moaning about it but the group stages never really get going until someone can be knocked out.

Catchy - I expect this did bemuse the locals...

DHG - The contrarian in me did launch off. I want to believe! I really do! But...

Ha! Here in the states, we also celebrate our stupidity-- er um that is, patriotism by drinking chilled horse piss, watching sporting events, attaching flags to our homes and vehicles and get this, FACE PAINTING!

Because everyone knows that "If my TEAM is a winner, then I AM a winner too". This requires very little effort and it matters not how much of a loser I CHOOSE to be.

You should see the idiot fans of the Oakland "Rayduhs".

Want To Boost Your ClickBank Banner Commissions And Traffic?