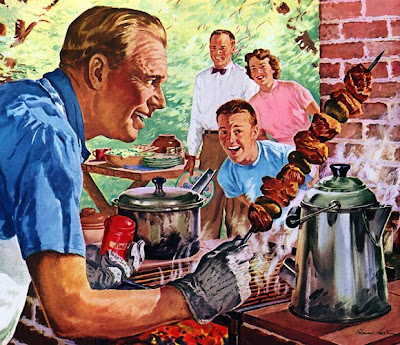 Picking up where I left off yesterday, here is some more 1950s advertising artwork. Actually it's the dad who looks scarier here, as if he has just barbecued diced bits of some elderly relative. The rest of the family appear to be colluding eagerly in this, though. It dates from 1952 and is simply headed 'cooking outdoors?' 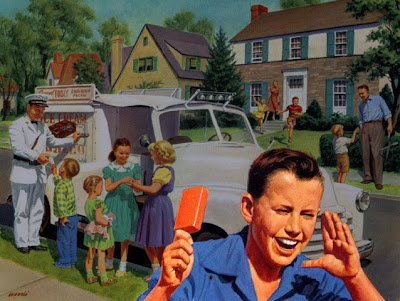 It's more the caption than the image above that troubles me here. It dates from 1954 and is captioned 'dry ice rings the bell with industry too'. I'm left wondering what on earth they were putting in those lollipops, particularly as the boy at the front looks as if he is about to go into a Munch's The Scream number. 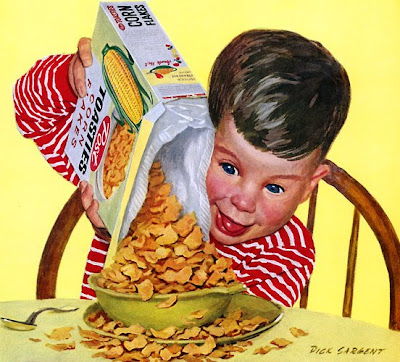 And as for this disgusting display of greed..... It won't be him who clears up the mess for sure. 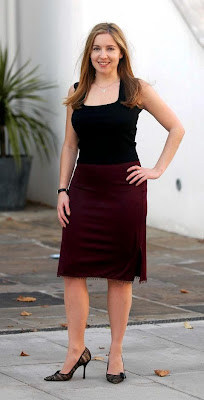 The rabbit has to admit to having a no doubt hopeless long distance crush on Victoria Coren. This even runs to watching her BBC4 quiz show because she presents it. How sad is that? This morning in her Observer column she muses on single people. The problem with single people, she pronounces, is that they are too picky, They should lower their standards. If she cares to practice what she preaches, I can assure her of my availability.
A bit of googling reveals that I appear to have competition, however. A very substantial sector of the male population of the British Isles seem to have a huge thing about her. And some of the stuff they put up on the internet about her - well it's not dreadful stuff or at least the stuff I've seen isn't - but the rabbit does raise an eyebrow. I did have to laugh at the bloke who wrote a poem about how he'd make a pact with the devil to have her lose to him at strip poker. As a seriously clever woman, she's very good at poker, though so this may be a touch over-ambitious.
Aren't men sad? Here is Victoria on the etymology of stilettos. What's not to love about her?

I hate to tip-toe around the issue, so I will get straight to the point.

Stilettos are wonderful when sitting, but just trying walking around in them. They were the number one cause of female foot problems as those women from the 1950's aged. The result was curled toes and pointy feet. It's a bit like the bound feet fashion of Japan - pain and suffering for the females in order to pleasure the males.

It is rather encouraging to discover that British men are all agog at a curvy woman, unlike most American men who prefer sticks.

No Rabbit, I actually find men to be rather delicious...Not sad at all. And The Maven greatly appreciates the tutorial on the etymology of stilettos. ;)

Oh she is very fetching! I think I may be developing a crush myself.

Seriously, I can see why so many men are taken with her. Nothing sad about admiring beauty and charm.

Dad was the only breadwinner.

Men are sad. Laugh. And the photos are over-exuberant and scary. Everyone is a spaz in them.

Catchy - I rarely wear stilettos myself and so I can't really comment. Curvy indeed :D

Maven - I suppose we're not too bad, Victoria did an entire tv series on the etymology of various words. This is a clip from one.

Little Flower - I quite understand!

Renegade - Okay they only cost $.05 but were they made of irradiated nuclear waste?

SB - I am amazed that advertising professionals thought that this sort of stuff would sell products and am faintly troubled with the thoiught that perhaps they did!

Great, but scary ads. What I found the most disturbing is the way everyone is dressed. Who the hell goes to a barbecue in a bow tie? How many kids run to the ice cream truck wearing their school clothes???