An explanation for the late despatch of the last post is in order. Last Tuesday morning, having completed the last post in draft the previous evening, I set out to court fortified by bacon butty and infusion of coffee feeing perfectly content with life. The court is less than 5 minutes from chambers Birmingham office.

I break rules 1 (look where you are going) and 2 (pick up your feet) and do yer pavement tripping production, going over like a tree on to my left hip. A crowd of concerned people gather. I ask a couple of blokes if they would help me to my feet as I can't do it on my own. They sportingly oblige. I stand clinging to a lamp post and wobbling. Two of West Midlands finest thereupon appear. They take over and - rightly - insist I get off to A & E in an ambulance. I was still - just about - in mad bugger mode and ready to keep walking to court despite being - erm - unable to walk.

The ambulance people were great, as was everybody else I met that day and I trundle off to City Hospital Birmingham, strapped to a trolley. I know what's coming next: x-rays, that's what.

Consultant is summoned. He concludes that I have fractured my hip and he's the man to put this right by insertion of screw and plate. Nothing more to eat or drink except 10mg oral morphine. This is still morning and I am admitted as inpatient and await surgery. The anaesthetist comes for a chat. General anaesthesia can loosen teeth he warns me. Any problem teeth? he asks. I indicate a couple. He didn't lie. They are not long for this world after the general anaesthetic. I am wheeled into whatever they call the anteroom to the operating theatre sometime early evening.

I already have two cannulae in my right hand. One for the saline drip and one for the anaesthesia I have a jokey little chat with the anaesthetist. Don't remember a thing after that...

I come round on the ward. The non-saline cannula will feed me intravenous morphine on demand. I make a discovery...

Intravenous morphine is rather nice.

I was on the intravenous morphie for the next two days, then I decided to ask them to switch it off. Although nice it makes you very woozy (not to mention constipated) and I needed to focus to get outta there. Just before going to sleep on the Thursday evening I treated myself to a great big toot of intravenous morphine and asked the nurse to disconnect it on the Friday morning, which she did.

Hospital is mostly boring. You just lie there. I read a 70-odd page novella called Water Source by a 11 year old called Will Goddard. It's very good and he deserves a big shout out, which he just got. I also started reading a Patricia Cornwell crime novel, which I may blog about sometime. Otherwise my new mate Pete - the seriously tattooed bloke in the next bed, he was in there after being bitten by an alsatian - brought me a paper in the morning as he was more mobile than me. I chatted to Pete and listened to Radio 4. That's about it...

Well there was the physiotherapy. I was the physiotherapist's teacher's pet - I got seriously stuck in because I really, really wanted outta there. I was released today (sounds like a prison sentence) and a good friend is putting me up for the next week or so while I recuperate.

Oh and every cloud has a silver lining. I stopped smoking and it was dead easy. I'd started smoking again during stresses and strains of last year as per posting below and it had developed into a serious hobby. No smoking in hospital of course and I had been told that smoking is a particularly bad idea after hip operation. Something to do with circulation of the blood.

I say it was dead easy. With all the morphine I couldn't have cared less about cigarettes. By the time I had stopped the morphine I was pretty much through the withdrawal stage. It's a pretty drastic way to stop smoking but it worked for me...

Americans are NOT stupid (and nor are lawyers)

This posting has been delayed for about a week for reasons about to be explained...

The above clip has recently come to the rabbit's attention and is presented without further comment, say to say that it was put together by some very naughty Australians, hence the prominence of Australia on the maps so helpfully proffered to the interviewees.

It is equally true that lawyers are not stupid. Well-known fact innit? Or is it? The rabbit is shocked to discover in The Lawyer that the intelligence of lawyers is declining towards the mean. This is apparently something to do with Ally McBeal. All lawyers of goodwill should do their best to contribute to this decline. The rabbit will be leading the way.

The following is pretty old stuff but there may be a few people who haven't come across it yet. Some of it may suggest that lawyers actually are dumb! They come from a book called Disorder in the American Courts and are real courtroom exchanges from court transcripts.

ATTORNEY: Are you sexually active?

WITNESS: No, I just lie there

(I think that's my favourite)

ATTORNEY: Were you present when your picture was taken?

WITNESS: Are you shittin' me?

ATTORNEY: How was your first marriage terminated?

ATTORNEY: And by whose death was it terminated?

WITNESS: Now whose death do you suppose terminated it?

ATTORNEY: Is your appearance here this morning pursuant to a deposition notice which I sent to your attorney?

WITNESS: No, this is how I dress when I go to work

ATTORNEY: Doctor, how many of your autopsies have you performed on dead people?

WITNESS: All my autopsies are performed on dead people. Would you like to rephrase that?

ATTORNEY: ALL your responses MUST be oral, OK? What school did you go to?

ATTORNEY: Are you qualified to give a urine sample?

WITNESS: Huh....are you qualified to ask that question?

There are clearly some fine minds at work in the legal system, despite this stuff in The Lawyer...

On a completely different subject and as a public service, it has come to the rabbit's attention that many Man Ure supporters are - poor little pets - in a state of great distress after their 4-1 home thrashing by Liverpool, a condition not helped no doubt by losing 2-0 to Fulham last Saturday (complete with Shrek aka Wayne Rooney being sent off). So sad is the confusion and hurt that there is now a dedicated helpline for distraught scummers - sorry Man U supporters, I don't know what came over me...

I've been meaning to do a couple of blogs of late, one serious one on the revolting Avigdor Lieberman and one not so serious one following a report about which words and phrases have disappeared from the language - my take would be what words and phrases ought to disappear from the language. Hopefully both soon...
So a few random comments...
I pinched the above from Jailhouse Lawyer - the new style Conservative posters are so susceptible to parody. I liked this one...
Will on cricket blog The Corridor (link to left) is very pissed off indeed. I liked his comment 'England quickly reverted to type and approached their innings with all the testosterone and impetus of a fucking flamingo stuck in quicksand'.
Nice metaphor Will...
There is also a blog in why nobody listens to anybody these days. I recently approached a bloke in Balham Sainsburys wearing the staff uniform finding myself caught a little short.
I asked 'do you have a Gents here?'
His reply...
'Pizza?'
Ermmmmm...
Posted by white rabbit at 17:38 12 comments: 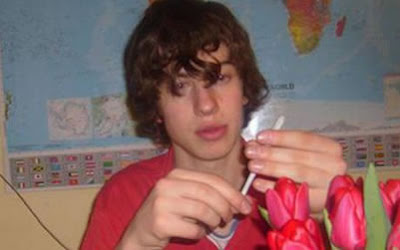 A dread warning from history: before even my time the late mother of well-known jailbird Jeffrey 'Lord' Archer (apparently she was named Lola) used to write a column in the local paper about her dear son 'tuppence' setting out the endearing history of his - erm - formative years. And look what happened to him...
Julie Myerson appears incapable of learning the lessons of history. For the uninitiated, Julie Myerson is a British novelist and appears on Newsnight Review regularly where she equally regularly shows up her shallowness in contrast to the commentators on that august arts magazine who actually have something thoughtful and knowledgeable to say.
She is also a relentless self publicist for whom no detail of her family life seems to be beyond milking for her 'literary' ends. She has a son called Jake (pictured). I should declare a slight connection: when Jake was Jacob, he was in the same class as my younger son in primary school. He was the class 'boffin' and apparently a decent cricketer. I began to notice that articles began to appear in the Guardian from la Myerson concerning her family life. They grated for two reasons: their insufferably smug, narcissistic tone and the fact that she was milking matters which really belong in the private sphere to sell articles in the press. What child wants or needs their mother endlessly gushing about them in the popular prints? One particular piece that sticks in my mind was one concerning the joys of nappies (that's diapers for American readers) and the description of her son's penis as a 'tiny comma'.
Okay guys, hands up if you would like your mother to burst into print describing your penis as a 'tiny comma'.
Thought not...
So far so cloyingly awful. But along has come trouble. On her version, Jake who is now 20 has become a skunkhead and his erratic and violent behaviour was so bad and disruptive of family life that two years ago his parents changed the locks and threw him out. Since then he has apparently been living with friends' parents and in squats. He works in the music industry. He claims that he has not seen his mother in over a year.
Now this was just be sad and a private matter except for one thing...
She's written a bloody book about it! Is there any aspect of her family life that this woman considers too difficult, delicate or - if she has any concept of the word - private to be used a source material to advance her literary career and presumably bank balance?
Apparently not...
Jake has hit back. Our heroine claimed in an interview in a magazine appropriately enough named The Bookseller that her son read a manuscript and was 'generous enough' to understand her need to write about the trauma. Jake's response to this is to the effect of 'no I bloody wasn't' and that he didn't want the book published although she apparently paid him £1,000 to use some poetry he had written in the book. The temptation to speculate that the money went up in smoke is irresistible. I record without comment that he describes his mother as 'slightly insane'. He further complains 'my mother has been writing about me for the past 16 years'. I can see his point.
The media commentariat have seized gleefully on this story. La Myerson has not come out of the media barrage well. Nor does she deserve to. Maybe consider the lesson: whoever you may be your children are private individuals and not a source material to be milked for your literary career. In other words 'just shut it!'
The link is pretty contrived but it's as good an excuse as any - here's The Kinks with Lola...
Posted by white rabbit at 15:01 12 comments: