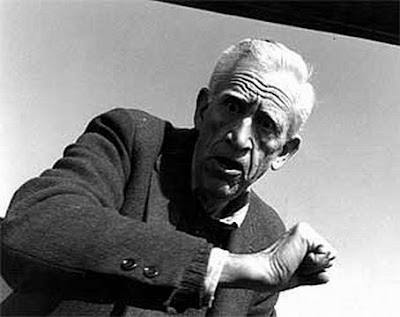 The death of J.D. Salinger has been widely reported. He was plainly a very strange man but I do owe him a debt of gratitude. I tooki O Level English Literature (that's GCSE young persons - and for overseas readers O Levels were exams taken at 16 by pupils deemed fit to take them - being a smartipants I took then at 15 but that's another story). I had three set texts: Macbeth - which is good fun, the poems of Robert Browning - which I developed an odd liking for. the one I particularly liked was My Last Duchess - we are in psycho central territrory there and David Fucking Copperfield - to give it its proper title. I can't tell you how much I hated that book. Every line was pure misery. I can't even remember why I hated it so much but I did. It's a bit like the worst job I ever had (with apologies to Derek and Clive) which was so awful all I can remember about it was that I stuck it for four days and didn't go back for the fifth, despite being rightly told by a co-worker 'never leave without your wages' - which were due on the fifth day - a Friday.

Anyway, after David Fucking Copperfield I just hated novels so much it was four years later when as an undergraduate I could bear to pick up a novel again. It was Catcher in the Rye. As a cure, it worked. I have rarely been without a novel on the go ever since. I mentioned Derek and Clive and The Worst Job I Ever Had. Oh all right then. If you insist... Warning: hugely not office friendly

As a parting shot on Salinger, one strange fact I didn't know until reading an obit today was that his first wife was a Nazi he was sent to arrest as such when he was an officer in Military Intelligence (a contradiction in terms - Boom! Boom!). They had eight months of vigorous nazisex and, thus sated, seperated. Heigh ho.
After this, I promise no more Cameron posters (maybe back to dreadful album covers) but here is one helpfully amended by some wag on behalf of the good people of Hackney. 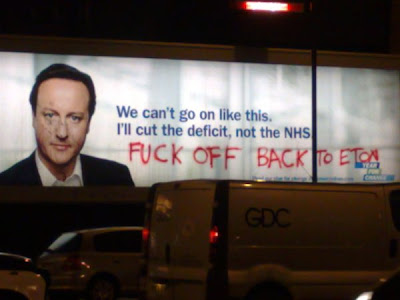 To which Beau Bo D'Or (link to left) adds for the sake of completeness... 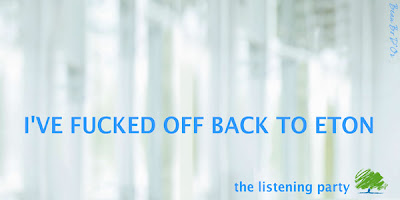 The catcher in the rye was one of my A level texts, I loved it then and still do, my O'level Dickens text was Great Expectations, I hated it and still do to this day, in fact I have rarely picked up anything by Dickens, same for the Brontes as I was force fed Jane Eyre.

I love the Cameron posters, I am easily pleased.

Catcher is considered a banned book over here, but I'm pleased to report that Sandwich High School's English Department required students to read nearly all the books on the 'banned' list. So I read Catcher in the 10th grade (age 15) and loved it!

I'm with you on Copperfield. I can't get through most of the so-called classics b/c they are so bloody BORING. I never got past 'call me Ishmael" in Moby Dick. I struggled to get halfway thru Gulliver's Travels before abandoning it.

Sad about Mr. Salinger. He was a master. Have you read Franny and Zooey? I imagine you have, but if not, it's pretty incredible too.

That video was hilarious! Reminds me of my bar tending days... some of the conversations I had and over heard were absolutely mind blowingly funny. Thanks for posting it! (Big Dudley fan)

CITR was banned by my local librarian. She would not allow me to borrow the book, so I just bought myself a copy and loved it. Now I'm grandizing it with my punny blog.

Salinger wrote a really beautiful short story that obliquely references his Nazi wife. That story is called "For Esme, With Love and Squalor." I really couldn't recommend it highly enough. Like pretty much every story in that particular book (Nine Stories), it once meant a great deal to me.