Just a quickie (as it were) 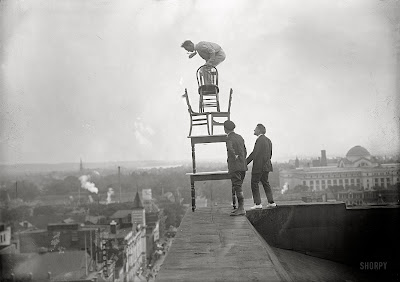 This pic is from Hank's Dreams (link to left). There's something fascinating about it. It gives me vertigo just looking at the guy's tie flapping about. And because it came to mind here is The Knack with My Sharona. It looks as if it was recorded in someone's back garden. Perhaps it was.

a win is a win, sugar! yeah for y'alls team! now y'all can cheer the new orleans saints for me, ok? xoxoxoxo

was i supposed to take my shirt off and swing it around my head?

Congrats on your win. Post a photo of yourself dancing with the lampshade on your head!
Peace,
pf

Savannah - Geaux Saints! How was I? (I lkearned the Geaux bit from you)

M - Yes. I think that would be in order.

Little Flower - Lampshade? Could result in a very nasty accident...

JoJo - Sorry! I say hastily I'm not a fan but it is a bit of an earworm as a song.

Ugh. Brings back memories of 9th grade and/or 1979. If I never hear that song again it'll be too soon. I refused to play it on my high school radio show. There was a backlash against the Knack, in typical American fashion, so "Nuke the Knack" became our battle cry.

That picture gets me, too.

I'm a united fan, as in Man Utd and I'm fucking gutted.

But still, happy new year to you.

Boy that was one lucky result. As a Rotherham United fan we never have to deal with such highs and low. Which is just as well considering we dont even have a ground to get all excited in. Good result especially against the mancs