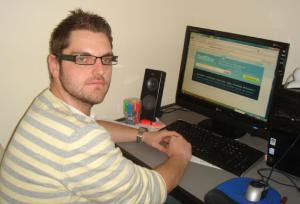 The person in the pic is named Paul Chambers. During the recent heavy snow, he found his travel plans messed with. He sent a twitter round his mates. It read as follows:

'Robin Hood airport is closed. You've got a week and a bit to get your shit together, otherwise I'm blowing the airport sky high!!'

Not the wittiest thing in the universe, but not to be taken seriously by any sensible person. Robibn Hood airport, of which I was previously happily oblivious, is Britain's newest airport and also describes itself as Doncaster Sheffield airport.

Last Wednesday 'after apparently receiving a tip-off from a member of the public' police arrived at Mr Chambers' place of work and arrested him under the Terrorism Act! I can almost hear the flat footfall of plod from here. He is then questioned for seven hours, a great deal of the time being taken up by Mr Chambers explaining Twitter to the bemused constabulary who had never heard of it. A lot of personal questioning followed with the lead investigator enquiring 'Do you understand why this is happening?' and announcing, 'It is the world we live in'. He has now been bailed and had his iPhone, laptop and home computer confiscated.

Mr Chambers was suspended from work and banned for life from Robin Hood airport (a ban most people would view with equanimity).

Okay - he hasn't covered himself in glory. Not the brightest thing to do. But how long does it take to work out that this was a lame joke and not a serious terrorist incident?
Several seconds, I would imagine. About the same time as it would take to tell him this was less than inspired and best not to do it again.

Or even a serious bomb hoax, which Mr Chambers may yet be prosecuted for.
Clunking, boneheaded authoritarianism by numbers!


On a completely different topic, here is an informative sign with Hat Tip to Sarcastic Bastard. 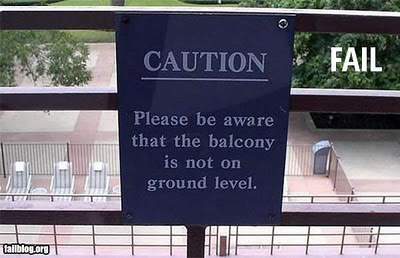 Some of these guys have no sense of humor, the cops I mean.

Big Brother needs to find his sense of humor. Sorry..humour. ;)

I guess it's part of their 'zero tolerance' policy, and they have to come down hard on the bonehead who meant it as a joke, to deter all other boneheads who might be tempted to make the same kind of joke. IMHO, anyway.

It's an easy target met, tick! Oh my giddy aunt, I certainly hope that I don't get to write that report. Say again, how does one measure idiocy? Society, it's employees, those in the seats of power who determine the criteria for employing them... no not the bomb hoaxer!

While the real terrorists are are out there plotting and planning and whatever they do... this is who get arrested??

On the other hand, I agree with one thing, it is the world we live in now, sadly... And, although a terrorist would likely never divulge his/her/their plans, a sociopath might. Can you imagine the fall out if a bomb were to go off and there was warning, no matter how ridiculous... Innocent civilians hurt... The officials would be crucified by the press!

However, they did shoot the puppy for pissing the carpet. It is obvious, they need balance... The over reaction by authority is almost as scary as the "threat" of terrorism itself. Once "we" begin to mirror "them" and terrorize each other, becoming single minded and loosing our perspective, and humanity, then we've truly lost.

I like the lofty balcony warning! Good one!
Peace,
pf

Yeah, bad news this, epic fail on his part an d epic over-react on the part of the police BUT, after all that shit about the pant-bomber's dad telling all and sundry his son was a maniac, no stone is to be left unturned.

They'll get some sort of conviction, which will help meet some New Labour target. This is easy and involves no thinking; but it makes the statistics that they hope will win votes. Meanwhile those who really want to blow up planes get on them. Finding them would involve thought and serious co-ordination and cost money that they would rather spend on illegal war.