At the risk of appearing slow out of the blocks, I confess I have only just discovered Uncyclopedia, a parody of Wikipedia. I strongly suspect that the discovery is going to provide me with many hours of innocent pleasure. For a starter, here is the beginning of the entry on Prince Charles 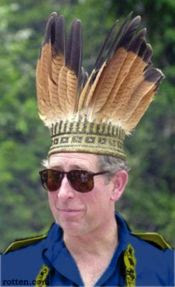 The first-born of English Queen-head Liz Windsor and her consort Prince Philip the Asshole, The Guggenshit, HRH Prince Charles, Prince of Wales, Duke of Rothesay, Duke of Cornwall, Hater of Modern Architecture, Lord of the Flies, Flatulent Hermit of Lindisfarne, Chief Hermit of Westmorland, Clone of Prince Philip, also known as The King of Late Night, is an unemployed professional gimp, wine connoisseur, and television personality who currently hosts the British late-night television show The Rather Late Programme. As you read this article you may feel a mild sensation of arousal. Don't worry, everybody loves a bit of bat-eared mediocrity'.

At this point the rabbit corpsed. His composure was not helped by a subsequent reference to someone called Camilla Parker-Bollocks. At this point mild hysteria set in. Only the discovery that England were 48/3 brought him back to earth with a bump. Bloody Sooth Effricans. 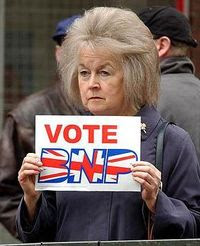 Also from Uncyclopedia is someone described as 'Miss BNP 2007'. Note the ears.

With Hat Tip to Tony (link to left) here is a clip featuring Neil Young's After The Goldrush. It is so weird it has me strangely fascinated.

Oh, you devil, you! Another post featuring a horned Satan. You must get out of this rut you're in.

Catchy - An exorcism will be conducted on this blog very soon in-deed. Mr Satan will be generally booted out!

OMG that is EXCELLENT!!! hahahaha