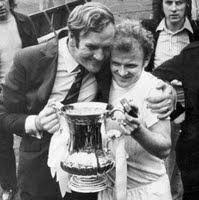 An explanation may be in order for overseas readers. You get your football team (as in soccer Americanpersons) with your DNA. Like your DNA, whatever happens subsequently it can't be changed. I got Leeds United. I was born there. I lived there till I was 15 and then moved just up the road. In my adolescence and early adulthood they played wonderful football. It was a source of great local pride. The local pride was reinforced with a seige mentality. It was suggested by some deluded souls that the footballing brilliance of the great Leeds teams was somewhat compromised by - erm - dirty play. Where this extraordinary idea came from is a mystery but it persisted (he wrote grinning from ear to ear).

Legaue championships, the FA Cup, European trophies followed. then the bubble slowly deflated. The beginning of the sort of end was the 'defeat' in the European Cup Final, the origin of the wac-coe thing (see WR 18 December 09). Relegation followed, then promotion and the last ever four division Football League Championship. Then financial lunacy chasing the dream, relegation, insolvency, points deduction for going into administration and a further points deduction for getting out of administration (don't ask, it's complicated), down to the third tier of English football for the first time ever.

The saving grace was the supporters. they kept coming through thin and thinner. Bare chested, twirling their shirts over their heads. They kept coming in their thousands. Now we are on the up again. Top of League One (as we are now to call the Third Division) by a country mile. I count no chickens but promotion looks a very likely bet. Then someone with a huge amount of money will realise what a potential goldmine the club is: one club big city, huge fanbase. Ker-ching!!!

And tomorrow we have the scum (official name: Manchester United) in the FA Cup. I can't describe how much we hate the strutting posing, braying, prawn sandwich eating, glory hunting - erm - tossers (I could have used much stronger language). We'll probably lose. We may lose badly. The team is still work in progress - a lot more progress will be needed to match the top Premiership clubs. I don't care. We're taking 9,000 tomorrow. Apparently we could have taken 30,000 if the tickets were available. Still bare chested, singing, chanting through thin and thinner.

There is only one objective this season: get promoted. But the diversion is delicious. But for a few hours more, I can dream of FA Cup glory

Oh, laiking? A Yorkshire dialect word for playing. T'? - The.

I actually fancy them for a draw tommorrow (& then getting hammered at Elland Road!nothing is straight forward in LUFCland!)

Sounds if your hatred of Man U is akin to most Americans hatred of the NY Yankees.

I'm a Yankee fan, by the way. I relish the role of villain.

PS - Oh, and Man U and the Yankees formed a corporate/promotional partnership a few years back. So they have that in common too. He he he!

well, ok, sugar! here's for y'alls team tomorrow! by the by, the MITM (aka the husband) had been a Man U supporter for decades, supernana follows arsenal and me? well, i follow the saints, baby (american football) xooxoxoxo

Good luck against Man U - I hope you thrash them.

i take it, following man u is not a good thing? xooxoo

I've got the same DNA hun born and bred.

Earl - You've got the hang of this. The NY Yankees connection had not escaped my beady eye.

Holy Jude - pleased to hear it :D ps - you were male in your earthly manifestation. Do you get a gender change option with sanctity?

Peter Groves - welcome to my humble blog. Yup - it's a DNA thing. Can't be changed.

There are so many options in the after life, however with those lovely long gowns of the time, who knows what lay beneath. ;0}

Something we say over here... If you're not an athlete, be an athletic supporter! heh!

ENJOY the games whatever they be!!

*grinning* What can I say, the Boston Red Sox are in MY DNA!!

JoJo - After googling, Now I know who Jeter is. I used to have a Red Sox T-shirt! :D