Sorry to have been a bit quiet of late and thanks to the one of you who enquired after my welfare, which was sweet. Basically, work has been pretty intense, including a trip down to Essex (which I can only explain to American readers as an English New Jersey) for a court case in the county town of Chelmsford (I lost). I stayed the night before the case in a hotel. When I got off the train it was about 10 at night, dark and sticky hot. I got a cab to the hotel and the county cricket ground was awash with light in the gloom. There was a floodlit T20 game still going on. I'm a sucker for that sort of stuff but it looked good. After I checked in, I went to the hotel bar for a couple of beers feeling hot, tired and thirsty. The first barely hit the sides going down.

After duly losing my case the next day, I got the train back to London. Or at least that was the plan. At a place called Shenfield the train stopped. And stayed stopped. There was a trackside fire further down the line. No trains into London. It didn't look good. In the end I found two other guys who agreed to share a cab. We queued half an hour for a cab - time well-spent. I got into London after a journey through Essex to the very eastern end of London - Upminster. Then into central London and on my way to the midlands. By the time I got back to Birmingham I was ready to murder another beer. I did. So pretty flat out this week. I managed to write a short article on trial without jury for a legal publication but my comic novel and online criminal law textbook move very slowly.

So there it is. I usually don't blog much about me but that's what's going on. I'm off down to London again tomorrow to see my children and drink red wine with blogger Charon QC (link to left!). A quote from Jerry Garcia I just found and like: 'I'm shopping around for something to do that no one will like'. I kind of know what he meant. But maybe it's not a great plan. Below is a floodlit cricket ground. It's not in Essex. It's in Kinara in India in fact. But I like the pic. Oh and above is Beethoven's Ode to Joy because it's great and Fleur reminded me of it. Who could be against the European project with an anthem like that? Okay all sorts of dolts but never mind. Have a good weekend all! 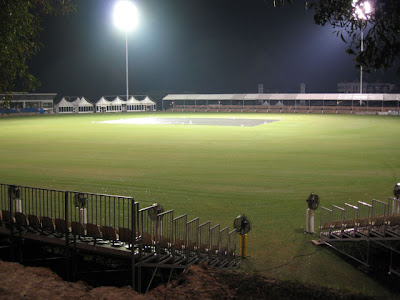 Glad you are ok. I was wondering about that myself. Seems like everyone I know is experiencing an unusual amount of intensity/chaos right now... maybe some planets are out of orbit or something.

Anyway, have fun and stay safe, and for Goodness sakes don't work too much!
Peace,
pf

Delighted to see the Rabbit again!! Sorry for your recent events, the least of which was probably losing the case...

Enjoy the time with your children and Charon QC! You've certainly earned it!!

Just to set the record straight, any rumors that we ran off together for the past five days are completely untrue. It was just coincidence that we reappeared at the same time.

Tip a glass of the red stuff for me in London town.

I can't hear Ode to Joy without thinking of the Bruce Willis film "Die Hard". Sadly.

I figured you were out of town on a law junket. Glad you are back! Sorry to hear it's been so hot and steamy over there.

And what a journey!

I used to Live & work in East Ham,Newham.I know from experience that the only good thing in Essex is the Romford Road into East London!
All Hail Mr Garcia!
Have A Good Weekend Sir!

What an interesting blog you've got here!
Hope you're having a great weekend!
The best,
B

What a splendid turnout - Perhaps I ought to do more personal diary type stuff...

Litle Flower - chance of not working too much would be afine thing! Having said this, I'd sooner work that just sit around waiting for something to happen.

Maven/Catchy - Charon and I did indeed share a glass of red wine as he mentions on his blog. He neglects to mention the two bottles of red before the glass. I should say that my drinking habits are usually moderate and can confirm that I did not run off with Catchy. It is indeed a coincidence that we disappeared and reappeared at the same time.

Earl - I think of splendid things European. Try it! ;)

Hi Pearl and welcome to my humble blog. It was a quite a journey indeed!

Bettyy - Thankies and interesting blodg you've got yourself.

I didn't realize you live in Birmingham. I lived in Wolverhampton for a summer.

I love the Duran Duran. Saw them in concert once.