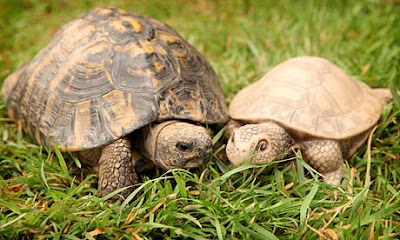 The fine looking creature to the left is Timmy the Tortoise. Timmy, who is aged 60, is a resident of Tortoise Garden Sanctuary in St Austell, Cornwall (no, there really is such a place and I am not making this up - it currently has 450 resident abandoned, unwanted, injured and illegally imported tortoises). Let the sanctuary's owner Joy Bloor take up the story - 'I tried introducing him to other tortoises but they don't seem to like him and bully and fight with him'.

A solution has been devised in the - erm - unusual form of Tanya, a plastic toy tortoise (right in pic - okay that was obvious but there you go). Timmy is in love! He brings Tanya lettuce. The fact that she doesn't eat it doesn't seem to concern him, nor does her general lack of responsiveness. He also nuzzles and kisses her and will only go in his hut to settle down for the night if she is put there first. What goes on in the hut at night does not bear thinking about.

On aesthetic grounds, I am not putting up Behind Closed Doors for the happy couple but instead let's have a quick blast of Roxy Music's In Every Dream Home a Heartache- a song about a guy who is in love with a blow up doll. As opposed to a plastic tortoise ...

Which was the entire premise of one of my favorite movies,"Lars and the Real Girl, " an endearing, humorous, independent film that didn't get much publicity.

What happens in the hut, stays in the hut... Yay for Timmy! wipes away a tiny tear. :-)

I feel kind of sorry for poor Timmy. But at least he has his new pal, even if she isn't real. At least she loves him.

everybody has to love somebody, plastic or no.

btw, RING OF FIRE was the first husband and wife dance at my wedding.

I love me some Johnny Cash. Deep and true!

thanks for putting it up! :)

She Tortoise All We Know!

What a heart warming tale.

AWWWW! Poor Timmy - to be bullied and then to find love in the strangest of places! Talk about alls well that ends well - though if you wanted to put a sinister spin on it what about ' Hazard' by Richard Marx?!
( Waits to be booted off the comments section)

A quick google reveals your drift. And Emily Mortimer was in it I see.

Mrs Hall - Yup - there's something about the guy and good choice for wedding dance too!

Maven - Absolutely best not to interrupt the lovers. How do tortoises make love? Slowly I suppose. Sounds all right come to think of it.

DHG/Bobby (to whom welcome to my humble blog) - It is heart warming as a story - if a bit sad. La vie, c'est triste.

Your Minxitude - Are you feeling quite all right, dear?

It's like a Real Doll for tortoises. Humping cold plastic can't be very inspiring.