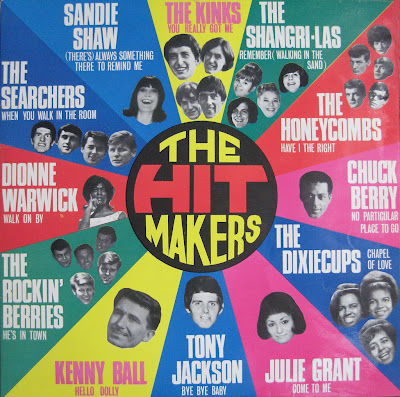 It's a bit like early modern history, I suppose. I noticed this album cover on Hank's Dreams - link to left - a blog where Hank tracks down curious, offbeat and otherwise interesting visual images and posts them. This is a compilation album cover (from Pye who - yes Hank - were a majpr UK record label at the time). I posted a clip from the Shangri La's Remember - Walkin in the Sand yesterday. I'm back to raid it for more early modern rock.


Okay, first up is the Honeycombs and Have I the Right? The drummer was called Honey, hence the band's name. Apparently the producer for this track - Joe Meek - had the band stamping on the stairs at his home and also hitting the bathroom floor with a broom!

I'm must say the that visual quality of these clips is seriously impressive. I'll resist the temptation to put Needles And Pins up. Stick to the stuff on the album cover!

Eek! Jimmy Savile momentarily appears! The Rockin' Berries are probably pretty obscure now but, like the Searchers, seem to be still going with the inevitable changes in lineup. They were from Birmingham yenno. Carole King wrote this song. Now back to work...
Posted by white rabbit at 12:32

They couldn't even use the Dixie Cups' "Iko Iko"???

JoJo - It (Iko Iko - recorded 1965) may not have been recorded at the point in time this compilation album was released. Chapel of Love was recorded 1964.

Ahhhhh! Google tells me I'm right! :D This album was released in 1964.

Very cool. have to say, though, that the Rockin Berries is the least rockin band name I have ever heard.

Hank - agreed, although the reason for the name appears to be that they played a lot of Chuck Berry stuff. I didn't know that Christine McVie - later of Fleetwood Mac appeared with them.

That makes sense, but still and yet.

Oh dear! true blasts from the past for me!

And I have to admit being amazed that the Rockin' Berries are still about. Although they remind me of Creme Brulee from League of Gentlemen or one of those other "has been" groups of elderly rockers.

There is the six degrees of separation between Peter Noone (Herman of Herman's Hermit) and myself, which means I have a love for their music.

And am still in contact with Peter who acts as if he is still in his 20s.

Tony Jackson?? I dont remember Him? Is this a good thing?

Trouble is with that kind of stuff, it lacks imagination and passion, it's actually really out of date, picked up by people who missed the first wave and decided to form a band on the back of the beat boom but kinda got to the party too late.

By the time many of those bands got under way, rock and roll was 10 years old.

But that's white folk for you.

tony - I strongly suspect this is a good thing in-deeeeeeeeed....

DHG - Can blue men play the whites? I sort of know what you mean but it has a certain charm. Best behaviour or I'll put up some Tremeloes ;)