The tendril festooned fellow in the clip above is named Paul the Octopus, a fine looking creature as I'm sure you'll agree. Paul is aged four and has oracular powers. He predicts the results of Germany's football matches by choosing a particular box labelled with one of the competing countries' flags, tempted by a tasty mussel therein. He is presently resident in Sea Life Oberhausen, Germany but was - he wrote adopting a confidential tone - born in England. To get straight to the point as regards Paul's predictions - he started in 2008 and has so far only got one result wrong.

I repeat - he's only got one wrong so far! Now the poor fellow is getting death threats! In particular Argentine fans, having the hump at losing 4-0 as forseen by Paul, have threatened to eat him. But security is tight and they have no chance. Germany were plainly doomed last night when Paul failed to pick them against Spain. Hat Tip to Mimi for this nonsense. And for those of you who should get out more - and not on cycles - here is an aerial map of the route of shame for the Schonrock children from home to school. 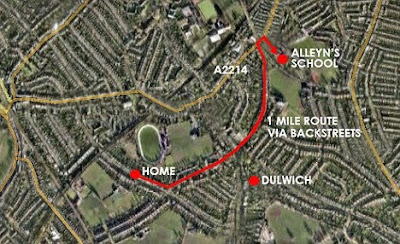 wow, really? the map the children take on their bikes, unaccompanied is now available for any pervert to use. whose fucking bright idea was that?

i'm sorry, you did start off about the octopus and i completely ignored the fact that he accurately predicted that spain would win. my money was on germany. (not really, i stopped caring after the usa was eliminated.) xoxoxo

I can't say much against the octopus. On our side of the pond we have ground hogs who predict the weather and, in the past, have had monkeys picking profitable stocks for investors.

I heard about Paul the other day on the radio. Too funny and cute!

this sounds no good. Mr. Hall was raised by a single mom who worked three jobs and thus he had to walk at least 3 miles to and from school starting at age five. There was not choice really.

BUT THAT'S BECAUSE HE WAS RAISED BY A SINGLE MOM WHO WORKED THREE JOBS.

Nobody better hurt one little sucker on his tendrils.... Or I'll be really sad!

"The People", one of the more moronic of British newspapers (and it's not easy to get into that category), paid a witch doctor to cast a spell against Germany to ensure that England beat Germany. He predicted a 2:0 England win. The result was 4:1 Germany win. Clearly the octopus is more powerful than a witch doctor - how much does it charge?