Robert Graves and Stella Duffy - a sort of review. 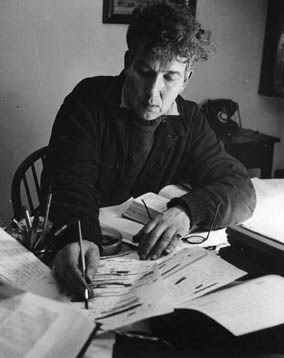 Robert Graves (That's him above, folks!) is one of my total literary heroes. A classicist by background and a poet by aspiration, he wrote some wonderful prose. His Goodbye to All That, a memoir of the horrors of an early twentieth century public school upbringing and the even greater horrors of the First World War should be read by - well - everyone. He saw himself as a poet and saw his excursions into prose - and in particular the retelling of myth and ancient history as potboilers to pay for the serious - ie poetic - stuff. The difficulty I have with this is that I don't particularly rate his poetry with the single - and wonderful - exception of In Dedication at the beginning of The White Goddess. By contrast, the Claudius books are great and his retelling of The Golden Fleece - now bizarrely out of print - is as good as it gets. One of the things I have to do before I die is to put flowers on his grave in the churchyard of the Majorcan village of Deya where he lived for decades and died and was buried.

I'm a bit of a sucker for literary antiquity. As well as Graves, I've tried Mary Renault's Alexander thing, which I couldn't quite get into and Valerio Massimo Manfredi's Alexander trilogy, which I could. I've just finished Stella Duffy's Theodora - subtitled Actress Empress Whore. This is sort of a spoiler but the sub title gives away the general idea. It's not really set in the antiquity I speak of so fondly as a literary genre (if such it be) - the story is set Christian Byzantium and we are talking 6th century - the same era as Graves's Count Belisarius - a man who also figures as a very minor figure in Theodora. Theodora is an actress and actresses pretty much inevitably becomes prostitutes - our heroine no exception. She is thus a seriously not respectable person, albeit admired by all for her acting talents and lusted after by many. Theodora becomes the mistress of an Imperial functionary in North Africa but can never marry him because of her history and lack of status. She eventually has a religious conversion experience - initially she sets out on this road cynically and for reasons of self-preservation but becomes genuinely - well - converted. Her spiritual teachers are of an unorthodox strand of Christianity considered by many to be heretical. She is sent back to the capital to make herself influential with the powers taht be in general and Justinian (who is not yet Emperor but is in line) in particular. Theodora's sass, intelligence and practical abilities win Justinian round and he passes a law making her a respectable woman.
Simple as that! Just pass a law. They marry and appear to have a surprisingly successful sex life given Justinian's earnest and bookish nature. Theodora makes herself busy giving vent to her practical side. She becomes Augusta. Stella Duffy succeeds in doing what always needs to be done for successful fiction. She creates a character you can engage with. You root for Theodora. You go girl! She handles the theological subtext cleverly. She has her characters talking dirty wonderfully. All in all - go buy! Oh and Stella - write the sequel. I know this has been said already but it's screaming out for one! Below is a mosaic, The Empress Theodora and her Retinue - from Ravenna. 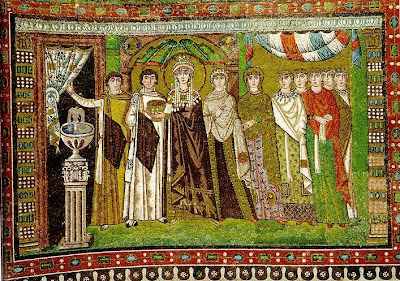 Okay, let's round things off with Graves's In Dedication...

All saints revile her, and all sober men

In scorn of which I sailed to find her

In distant regions likeliest to hold her

Whom I desired above all things to know,

Sister of the mirage and echo.

It was a virtue not to stay,To go my headstrong and heroic way

Seeking her out at the volcano's head,

Among pack ice, or where the track had faded

Beyond the cavern of the seven sleepers:

Whose broad high brow was white as any leper's,

Whose eyes were blue, with rowan-berry lips,

.Green sap of Spring in the young wood a-stir

Will celebrate the Mountain Mother,

And every song-bird shout awhile for her;

But I am gifted, even in November

Rawest of seasons, with so huge a sense

Of her nakedly worn magnificence

I forget cruelty and past betrayal,

Careless of where the next bright bolt may fall.

Just how bloody wonderful is that?

You know, I just don't get poetry, unless it's set to music.

Are you certain the horrors of World War I were worse than an early twentieth century public school upbringing? I'd say it's a toss up. Okay, okay, I'm kidding. Just kidding.

Oh, to be loved by a poet! Can there be any deeper passion when words are ordered in such a magnificent way?

(I'm looking at this strictly as a love poem and ignoring any religious/mythical connotations.)

JoJo - I sort of know what you mean, Bad poetry is just plain bad -and most poetry is bad. And yet...

There's Eliot and Yeats in the last century, Keats and Shelley in the one before then further back John Donne.

And there are others.

Catchy - Is it not quality? It is a love poem - a love poem to the female as magical and mysterious and powerful, the poetic muse. I think Graves was basically the last of the bronze age pagans. The White Goddess begins with the poem above and ends with 'there is no goddess but thetriple goddess'

Stella - We do our humble best :D