The miscegenation laws are back... 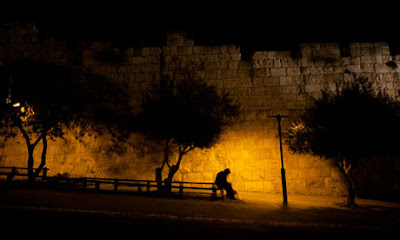 The above pic is of the old city walls in Jerusalem. In September 2008 and in that city Sabbar Kashur, a Palestinian man met a Jewish woman. He - and it could hardly be said he is the first man to lie for sex - told her that he was Jewish and looking for a serious relationship. With somewhat startling haste, they hurried off to a nearby building and had what no-one disputes was anything other than consensual sex.
So what happens next? She finds out that he was not Jewish indeed - shock horror - he is an Arab. So what does she do when armed with this knowledge? Only files a criminal complaint, that's what. He is originally charged with rape and indecent assault. On a plea bargain, he pleads guilty to rape by deception. A pre-sentence report spoke of him in glowing terms and recommended a community penalty. The sentence?
Eighteen months imprisonment!
I don't think the sentence can be seperated from the racist poison infecting Israeli society generally. Israeli commentator Gideon Levy asked what would have happened if a Jewish man had sex with an Arab woman under false pretences. 'Would he have been convicted of rape? The answer is: of course not'.
A poll conducted in 2007 by Israel's Geocartography Institute found that more than 50 per cent of Israeli Jews thought marrying an Arab was 'equal to national treason'. There is no civil marriage in Israel, the effect of which is that Jews and non-Jews who wish to marry must go abroad to do so. In 2009 on a squad of 'vigilantes' in the Jewish settlement of Pisgat Zeev. was reported to have patrolled the streets for more than a decade looking for mixed couples.
And in 2009, the town of Petah Tikva established a team of counsellors and psychologists to 'rescue' Jewish women from relationships with Arab men. I use the term racist poison advisedly. I (just) resist a comparison with the 1935 Nuremburg Law prohibiting marriage or sexual relations between Germans and Jews.
On a happier topic, Tony mentioned Norman Hunter of blessed memory in a comment on my last posting. Here is St Norman sorting out some opponent (Channon?).Grab his arm. Kick his arse. that's the way to do it... 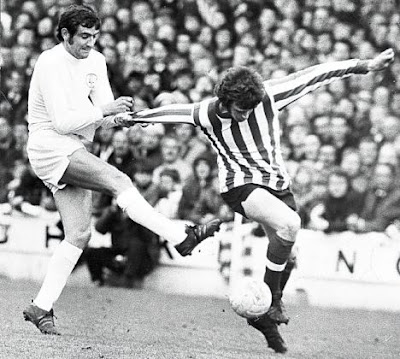 Years ago, in my corner of the world, Swedish immigrants who dated or married Norwegian immigrants were shunned by their families. Fortunately none were jailed. It all seems so primitive and archaic. Some societies still have a long way to go to become truly civilized.

And when they get together you end up with someone like me. OMG!

I'm the product of a Presbyterian and a C of E intermingling.


Oh the shame of being a mongrel

Well it might start as sex, but where would it end?People might start talking to each other.....
i alway wondered why Shannon had one arm longer than the other, another mystery solved!

Catchy - Sounds reasonable to me! :D

We don't want that sort of thing. I have an old Leeds fanzine somewhere with a cartoon of Norman pottering about with a disarticulated lower leg wearing football sock and boot in his hand. By all accounts a very nice manunless you were unwise enough to play for the opposing team...

Oh you should have heard the crap that my smother used to say about my 'Boston Shanty Irish' fiance & his family. She HATED him. It was pretty clear that she did not like Boston Irish at all (she's Italian, and while she has a lot of Irish friends, they are all from the Cape. Boston Irish are a different breed).

I hop your mother became reconciled to him/them!