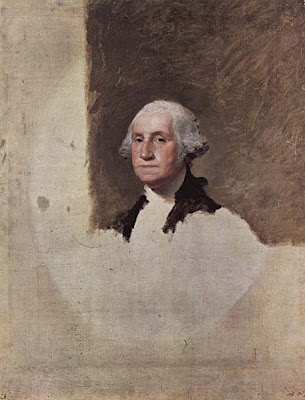 It is a tradition going back to - erm - 2008 for the rabbit to mark the 4th July - celebrated as the last date where Americans put the day before the month ;) - by sending greetings to American readers. Above is the unfinished portrait of George Washington by Gilbert Stuart known as The Athenaeum. I'm not quite sure why he didn't finish it, but the head made its way on to the dollar bill. I'm also not sure what you are supposed to do if you plan on finishing it. Probably best not to try.

Fact about George Washington little-known to Americans: he was a cricket nut. As was John Adams. I mention this as I have seen rants emanating from various backwoods to the effect that cricket is unpatriotic and just played by annoying immigrants. So just how American were Washington and Adams?

In 2008 I marked the 4th July with Brad Neely's Washington - which still cracks me up and Bruce and pals with Darlington County and in 2009 I blogged on how the snake and don't tread on me on had been appropriated by some dubious characters and how this was a pity. It was also a good excuse to put up Uncle John's Band, however. Below is a photo from about 1900 of Bart King - the one truly great cricketer the United States has ever produced. Washington would have approved. 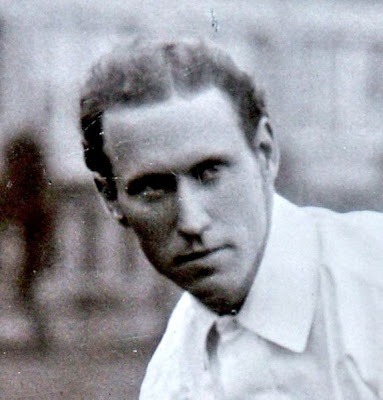 The portrait wasn't finished because Washington was too tall to fit on the paper.

Cricket. The sport of Gods.

I'm pretty sure Gilbert used the unfinished portrait as a prototype. He reproduced the image many times over and was paid handsomely for each repro.

Why celebrate an unrepentant slave-owner (cricketer or otherwise)?

Mahal - Ermmmm.... I don't think it's about endorsing a bunch of slaveowners who were able to put their names to the proposition that 'all men are created equal' with a straight face but - like Tony says it's about saying Happy Birthday America! to the people there now to the people who aren't at fault for that nastiness.

ps I commented on a previous 4th July in a comment to savannah that John Adams uniquely among the founding fathers hated slavery and his farm was staffed by free men. He died with $100,000 in the bank. Jefferson, the slave owning southern gentleman, died $100,000 in debt.

Maybe a lesson there...

Oh and I think Brad Neely's 'Washington' (follow da link) - apart from being very funny - is clearly aiming to subvert the cult of Washington as cross between saint and suoerman,

now, rabbit, y'all know i love you, but really? cricket? that ranks right up there with curling as sports i have labored to understand... xoxoxoxo