The rabbit has now hopped back from London to find the above (Hat Tip to Charon QC, jailhouselawyer and similar reprobates). By way of explanation for overseas readers PCSOs (police community support officers - abbreviated to CSOs here to the greater glory of a CSI Miami or wherever type pun) are - well - no-one quite knows what they are for. They are some sort of uniformed backup to the police but are not police and do not have police powers (or salaries, which may explain a lot) They wander about to no discernible purpose and are generally useless and - as revealed in an early White Rabbit - are often exposed to the mockery of rough fellows.

Lion Eyes TV , who the rabbit confesses to never having heard of before made the above rather splendid PCSO baiting satire. As a pilot, it works. Perhaps one of the channels (BBC4?) should run with it.

The estimable Dental Maven (link to left) has accidentally drawn my attention to
snopes.com - basically a website for urban myths, some actually true. Sadly untrue is the one the Maven debunks following a comment on her blog concerning a young woman suing following getting pregnant after spreading contraceptive jelly on toast. It is apparently one of the stories from one of those gloriously bonkers American papers that peddle insanely implausible 'news' stories that (sort of) entered the mainstream. If anyone wants to open a UK equivalent, I'm available for editor! 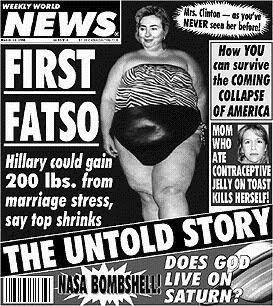 I rather like DOES GOD LIVE ON SATURN? A question to exercise all seekers after truth. I also like the story concerning a strategically placed turkey neck - an edifying note to end this posting on.

Ah, snopes.com and the Weekly World News - two of my favorite things. Sadly, the WWN is no longer available in print.

I don't forward any emails till I check Snopes. And I got yelled at by someone calling me a kill joy because I attempted to educate them so that they wouldn't look like a complete idiot. Oh well. Stupid is as stupid does.

Rabbit!!! Thanks so very much for the shout-out! And yes, I too, wanted the contraceptive jelly story to be true. Pity it isn't. :(

My golly, I could just imagine the horrors that would befall any would-be CSO in the Washington, DC area!! It would most assuredly go beyond mockery.

Snopes is older than time, always useful to rebut an urban myth.

Darn. I wanted to find out how the toast tasted !

Maybe ITV should have followed Cameroon's "Big Society" idea & cast THE BILL with Amateur Thespians?
Oh,& thanks for the jelly! I was eating toast when i was reading your blog!