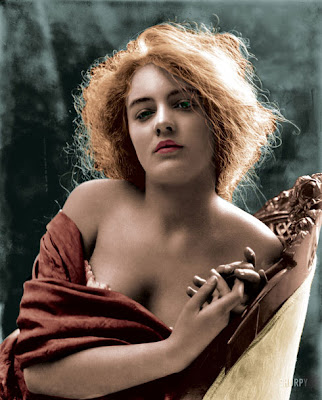 Following my posting yesterday linking to an old Shorpy related posting, I have found (a) a colourised version of the Thisbe photograph and (b) EVEN BETTER! who she was. The rabbit is feeling rather pleased with his detective work. It's a good story.

Her name was Florence Evelyn Nesbit (December 25, 1884 – January 17, 1967) and she had an unhappy and rather dramatic life. She was an artists' model and chorus girl and was involved in the 'murder of the century'. It seems that she had a certain fame - or at least notoriety but I confess I'd never heard of her. It goes something like this....
When she was 16 she and her widowed mother moved to New York from Pennsylvania. She was able to keep her impoverished family as an artists model and later - through her chorus girl activities - met architect Stanford White. She was then 16 or 17 and he was about 48 and a notorious womaniser. Bizarrely, White kept a velvet swing and derived sexual pleasure from pushing naked or near naked young women on it. As one does. He eventually took her virginity after an episode involving a yellow kimono and a lot of champagne.
White then moved on to the seduction of other young virgins and the young John Barrymore wanted to marry Nesbit but she turned him down. At 20 she married a man called Harry Kendall Thaw. He was a wealthy cocaine addict and alleged sadist who was obsessively possessive of Nesbit and fixated on her relationship with White. One evening in 1906, Nesbit and Thaw ran into White. While at the theatre and during the song 'I Could Love A Million Girls' - nice touch that - Thaw fired three shots at close range into White's face, killing him instantly and reportedly exclaiming 'you'll never go out with that woman again'. Well he wouldn't really, would he? He being dead that is.
Nesbit testified for Thaw in his murder trial. He was acquitted but she never received a penny of the million she was evidently offered as a divorce settlement. Thaw was put in an asylum but escaped to Canada, was extradited back to the US but basically let go of by the authorities.
Oh and there was a Spiritualist aspect to his defence to murder. Thaw stated that his urge to kill had come from a mysterious force outside of his body. Namely, that he was possessed by the spirits of the dead. The claim was supported by a doctor of medicine and a member of the American Association for the Advancement of Science named Dr. Carl Wickland. The Chicago doctor’s wife was a proponent of Spiritualism and a professed medium. Three weeks after Thaw’s arrest, Mrs. Wickland insisted that a spirit voice came through her during a séance and confessed that it had forced Thaw to kill Stanford White! The spirit told the group gathered in the séance room that 'I killed Stanford White. He deserved death. He had trifled too long with our daughters'.
Um righty. The rabbit wouldn't fancy running that one as a defence.
And Nesbit? Her career was at best modestly successful. She remarried and had one son. She made a number of suicide attempts and suffered from addictions to alcohol and morphine. She died aged 82 as above.
I never expected to find out this. A sad but fascinating story. It was even made into a film in 1955. I never imagined I would find out who the pretty young woman was, or what an amazing story was in the background. Now I head off for Essex. Court work tomorrow. Here she is again. 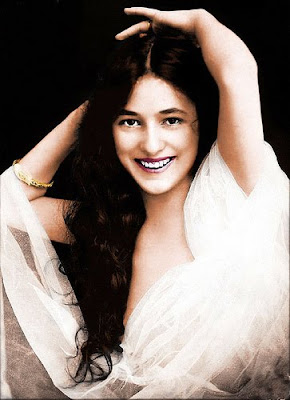 And Joan Collins played her in the film. Wow!

Thanks for the detective work. I have seen the film several times. I think Nesbit's earlier picture as a blond very much resembles Drew Barrymore (another Barrymore connection.

If you have a chance sometime, read the novel Ragtime by E. L. Doctorow. It's fiction but includes many actual people, including Nesbit.

That's seriously cool!
I am now Shorpy addict, I admit. :)

Why do these photos remind me of the Who's "Pictures of Lily"? lol *wink*

And The Maven hastens to add that, the good doctor Wickland, in addition to practicing psychiatry, was also a "paranormal researcher." Egads.

Thanks to all for comments.

Earl - I have to admit I struggle with the idea of even the young Joan Collins as la belle Evelyn.

Hank - Thanks for this piece of Hank knowledge. I'll be sure to check it out.

Tony - I need a time machine to rescue her from all this unpleasantness.

Maven - It does seem bizarre that this nonsense was apparently receivable by a criminal court - presumably as expert evidence. At least he wasn't a dentist and thus besmirching the good name of dental persons!

Catchy - My bad not to comment before. I think you are right about the Barrymore thing it is weird. Could construct a whole conspiracy theory out of it!

Mrs Hall - Quite so. She had a 3 year affair with the man she later gave evidence raped her. I think she and mother were rather keen on the money...