Ian Tomlinson and an idiot pathologist...

Into serious mode, I fear. The above clip is of the G20 protests in London on the 1st April this year. The clip shows a man being shoved to the ground by police. The man is named Ian Tomlinson and is in fact nothing to do with the protest. Tomlinson is seen to be attacked from behind and thrown to the ground by a baton–wielding police officer in riot gear He is a newspaper vendor and aged 47. Tomlinson died shortly after.

The video footage and various witness statements constituted something of an embarrasment to the Metropolitan Police who had previously been spinning that Tomlinson had pre-existing health problems and that his family were not surprised by his death. A Dr Freddy Patel (below) conducted the first post-mortem and concluded that Tomlinson had died of a heart attack. The BBC has claimed that he did not meet the criteria for Home Office Pathologist status. The coroner who chose Patel has consistently refused to say why he was selected. But it gets worse ... 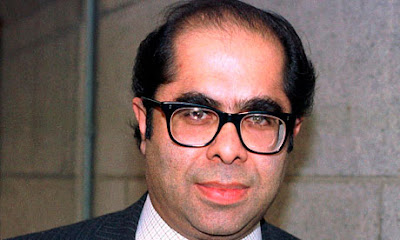 Following the video clip above entering the pubklic arena the normally obliging (to the powers that be, that is) Independent Police Complaints Commission took the investigation of the Tomlinson death out of Metropolitan Police hands and authorised a second post mortem. The second post mortem established that Ian Tomlinson died - not from a heart attack - but from internal bleeding.

Armed with this information, did the Crown Prosecution Service (CPS) launch a prosecution against the identifiable - and identified - police officer who attacked Ian Tomlinson?

The CPS explained as follows: it could not bring a charge for assault because too much time had elapsed. A charge must be brought within six months. No such restriction applies to a charge of manslaughter. So why not prosecute for manslaughter on the basis that the officer's unlawful act caused Ian Tomlinson's death?

Because of the conflict between the findings in the first and second post mortems is the answer.

Patel's report found that Tomlinson had died of a heart attack, remember. No prosecution would follow. This is newish Director of Public Prosecutions (DPP) Keir Starmer's equivalent to his predecessor's de Menenzes moment. The family of Ian Tomlinson were deepy upset and angry as may be imagined.

But what do we have in the news today? Patel - the man whose findings were relied on the CPS in deciding not to prosecute 'acted in a way that amounted to misconduct during two earlier post-mortem examinations and his fitness to practise is impaired'.

So there will be no prosecution on the basis of this idiot's 'findings'. A modest proposal to the DPP: why not prosecute for manslaughter on the basis of the second post mortem, give away Patel's report as unused material and let the defence use him if they are - erm - so advised? Here is a picture of Keir Starmer for purposes of identification should any reader bump into him and cares to make this helpful suggestion. 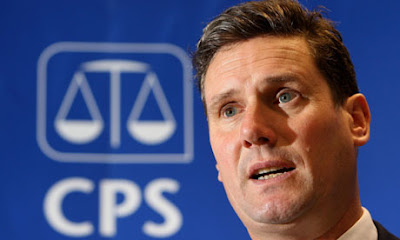 It seems to me that manslaughter would be a more appropriate charge than assult, even armed with the first autopsy information since the act resulted in a death, either directly or indirectly. But I know nothing of English law and I doubt I'll be running into Keir Starmer any time soon.

It seems the British police are as much power maniacs as American law enforcers.

Wow.
What a frakking mess!
Patel gives me the creeps.
I hope the family can at least sue for some damages?!

"A modest proposal to the DPP: why not prosecute for manslaughter on the basis of the second post mortem, give away Patel's report as unused material"

Patel's report is the basis of the second post mortem, as only he examined the complete body, and he didn't retain fluids. So, dropping Patel's report would undermine Carey's (or even Shorrock's) evidence.

Catchy - It gets technical and convoluted but goes something like this: Patel stated in his initial report that he found but did not retain or sample 3 litres of 'intraabdominal fluid blood'. Nobody found an internal rupture that would explain this degree of blood loss. He later changed this to 'intraabdominal fluid with blood' saying the fluid was mostly ascites (a substance formed in a damaged liver - Tomlinson had cirrhosis of the liver). This is important as the second post mortem found the cause of death to be internal bleeding from blunt force trauma to the abdomen. As to the rest,the CPS concluded that Patel's evidence would significantly undermine the second and third post mortems but see below.


Sybil - I expect the family will be quietly paid off without admission of liability in due course.

Bentham - Welcome to my humble blog. You seem much livelier than when I last saw you in University College. I've read on and have the point about Patel not retaining fluid samples(one may ask why not but that's by the by) and that this fact underpinned the decision not to prosecute but Cary (with whom Shorrock of course agreed as to cause of death) disagrees with the decision not to prosecute. He must believe that his findings are sustainable even in the absence of the three litres of fluid in respect of which Patel has contradicted himself in any event (the insertion of 'with'). Thanks for your contribution anyway and interesting blog you have there...

All I can say is: That's just crap. You guys need a longer SOL on stuff like this. 6 months? That's ridiculous!