I really don't want to go here but... 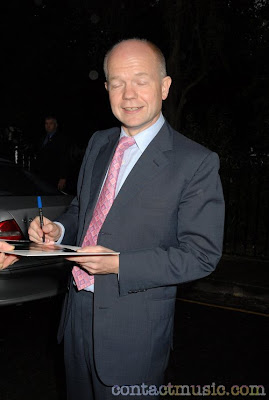 For overseas readers and the terminally inattentive, the above person is named William Hague, he is Foreign Secretary (that's like Secretary of State American persons!) I say straight away that I have long disliked him from afar as a Europhobic Tory twerp with an annoying voice - okay an annoying everything...
He also has no hair but I digress.

Hague has been in a spot of bother of late and Tory blogger Guido Fawkes is to blame. I have generally viewed Fawkes's blog as a useful outlet facility for Tourettes sufferers (his commenters) to let their condition rip in harmless and controlled circumstances rather than doing it in the streets and frightening - well - everyone. Hitherto, Fawkes's most acclaimed scoop was John Prescott and Tracey Whatsername being at it. Again for overseas readers, John Prescott was Blair's deputy prime minister (purely to massage his vanity and keep the Labour Party - which had an irrational liking for the appalling mound of lard) happy. At one point in the course of his spectacularly undistinguished deputy prime ministership Prescott was having an affair with one of his civil servants, a woman named Tracey Temple. When the story went public via Fawkes, Tracey Temple went public to the Daily Mail - allegedly for a £100,000 fee. Part of the story involved Mr Something-or-the other (a pet name for the Prescott appendage) going to sleep and refusing to perform. Yuck!!! 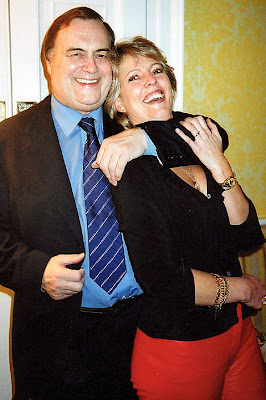 Here are Prescott and Tracey discussing these matters. A faint feeling of queasiness is taking over...

Anyway, Fawkes has struck again. For as long as I can remember there have been rumours about Hague's sexuality. I say straight away I have no knowledge as to whether or not they are true and couldn't care less anyway. William Hague + Sex = Yuck!!! Part 2. The story concerns Hague's former driver and now also former special adviser, a person named Christopher Myers or 'handsome Christopher Myers' as the Daily Mirror gushingly has it. Two Sunday newspapers had the story but sat on it. Fawkes went public. Hague shared a hotel room with Myers in April 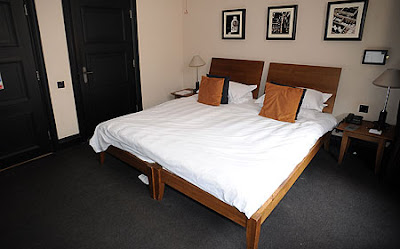 The hotel room was soon in the public arena. 'As our exclusive picture shows, the twin beds and mattresses are usually pushed together and presented as a double room for couples and sold for between £105 and £160 a night' burbles the Mirror, warming to its theme. 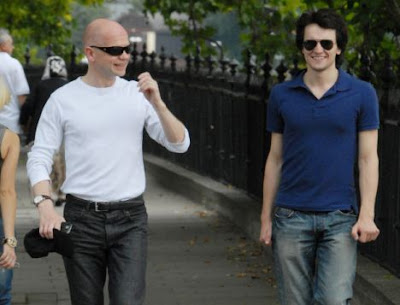 And this photo of Hague and Myers was suddenly all over everywhere like a rash. Hague was reduced to a cringe making (and undoubtedly inadvisable) statement featuring prominently how his wife Ffion had suffered a succession of miscarriages. Thus explaining their lack of children. Truly awful stuff. Various Tory Bloggers notably Ian Dale have turned on Fawkes (real name Paul Staines) for - well - turning on one of their own. Scroll down to the 1st September posting on Dale's blog to get the flavour of things.

Does any of this matter? Not a great deal. I conclude. There is at the margin a public interest in that Myers was promoted from driver to special adviser to Hague on public funds while seeming to have no apparent qualifications for the job and Hague already having a sufficient complement of special advisers. Cronyism is a legitimate subject for public debate but the rest is prurience. Unfortunately but unsurprisingly, prurience has drowned out the legitimate public interest topic. I suppose it was always going to...

Whilst I hold no particularly strong opinion as to whether Mr Haig is, in fact, bowling from the pavillion end, my sympathies lay entirely with his poor wife, who has had to bear the revelation of her most private sorrows to save the skin of a millionaire who shared a room with his aid to save party costs.
Poor old Ffion.Is it possible for a woman to be cuckolded?

'bowling from the pavilion end' That's immortal! Never heard it called that before. Yes, I do feel sorry for the hapless Ffion. As regards the multi-millionaire who shares a room to save money, I can only say that he does come from Yorkshire ;)

Do you know, I'm amazed that this one wasn't spin doctored into a 'he was only trying to cut down on party expenses and bunked up with a mate for the night'. A nice little pic of Morcombe and Wise to go with the spin doctorey would have done the trick, wouldn't it?

Perhaps that's why Blair had to go, he couldn't face a night of jim jam partying with Margaret Beckett?

Barmaid - long time no see! The saving money one is already out there.

I once saw Margaret Beckett in Nine Elms Sainsburys. She dropped grapefruit all over the floor. More pleasingly, I once also saw Joanna Lumley (who didn't drop grapefruit) there...

Nice to see that the ugly side of politics exists across the pond, too. You know- misery loves company, and all.
The name Ffion is fascinating to me. Is the first F silent?

Despite the advances made under David Cameron the Conservative Party seems to still be a place where it is necessary for at least a number of people to deny that they are gay. Poor William Hague seems to have had to do this at regular intervals throughout his career. I can't understand how someone who is supposed to be so intelligent can be stupid enough to behave in the way that he has lately.

Sharing a hotel room with a young male colleague is stupid enough. To over-promote him to the role of personal adviser to a government minister and camp it up walking down the street with him dressed like a freak looks like some sort of cry for help or act of self harming.

The cherry on top has been for William Hague to promote the story from the blogosphere to the national headlines by putting out his ridiculous statement last week. Publicising his wife's miscarriages in order to prove his that he is not gay does not seem to me like the act of a loving husband or even a balanced human being.

William Hague seems to be stuck in some sort of Tory time warp where being gay is still a scandal. In 2010 its not a crime to be gay or even to act like you are. Hague ought to be able to laugh off the rumours whether they are true or false. He can't though because he is still that little boy who became famous by getting applause and from all those right wing nasties at the Conservative Conference in 1977. He doesn't seem to have been able to grow up properly since then which is what makes him so pathetic but makes this story so fascinating.

he's always been in love with the blessed margaret. quite what that says about your sexuality is anyone's guess.

like you, i despise him and none of his behaviour will make that any worse. mind you; not very clever promoting someone quite so random to the most important job in C21st politics, special advisor.

i certainly don't have any sympathy for ffffion. people know what they are doing when they marry politicians. mind you, posting details of your inefficient reproductive system all over the news is a special kind of tacky even for a politician. she must be regretting her bargain with the devil.

i also enjoyed dale's righteous indignation on the subject. bless.

We need lefty blogs that cause a stir. In the US the mosque affair, was started by a loony rightist blogger.

Well, I can do better than that WR. Frazer Hines (Joe Sugden out of Emmerdale) once looked at a cottage I did up and was trying to flog. He didn't put his hand in his pocket though.

Sybil - Ffion is a Welsh name. It is pronounced Fee-on so at least one of the fs is silent. Welsh is ffunny like that as a language.

William welcome to my humble blog and very nicely put too - the more I think about the announcement about Ffion's miscarriages the worse it is. It's also in the paper today that our hero took Myers on a jolly to Afghanistan and Bahrain on the payroll despite Myers having no known expertise in foreign policy - or indeed anything else. The photo of Hague and Myers is filling rattlingly awful.

SW - Mad Margaret plainly did it for him bigtime but she is in the Judy Garland/Donna Summer league as a gay icon so nothing much proved/disproved there. Dale does indeed get on his high horse doesn't he?

Renegade - Blogging is oppositional, I think the success of the Fawkes/Dale/Dizzy type blog over here was that they established a significant niche attacking the Labour Government from the right. What now happens will be interesting - I don't think Fawkes will pull his punches but others may.

Barmaid - Oooooh! Get you! Maybe you missed your vocation as a cabdriver 'I 'ad that Frazer Hines in the back of the cab once'...

Dude, are you on Facebook? Friend me if you are! Also, get on "networked blogs" on Facebook, and it will automatically update whenever you do.

Yes, I know Facebook is The Borg or The Illuminati or something like that, but hey, its all inevitable, so don't worry! :P

@ sybil law: When William Hague was Tory party leader the big question was 'Why is there two ff's in Ffion?'. The answer, it is said, was 'Because there's no effing leader!'.

Well except to say, I love the "Your Minxitude"!!! Very good!

Yes there is a fig-leaf or an argument that there is a genuine public interest; but the reality is that that a combination of prurience and disappointed members of the right-wing of the Tory Party are driving this story – the xenophobes who expected Ministerial positions and haven't got them. What really matters (apart from WR's deplorable prejudice against the follically challenged, which in a civilised world would be a criminal offence) is whether Hague is any good as Foreign Secretary (or at least not as bad as any of the real-world alternatives). So far, at least he hasn't fallen to the depth of sycophancy towards George Bush and Israel shown by some of his predecessors; so for those of us who don't start with great expectations of either Tory or Labour Foreign Secretaries that isn't a bad start.
Sybil 'f' in Welsh is pronounced like an English 'v'; 'ff' is the equivalent of the English 'f': hence 'Ffion', 'Ffrancis', 'Ffestiniog' and so on. So to a Welsh person 'ff' doesn't contain any silent letters: its simply a pair of consonants pronounced in a different way from the way a single consonant would be pronounced, rather like the Spanish 'll' or 'rr'.