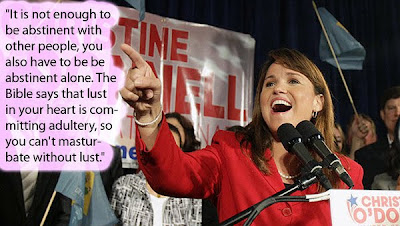 Informative stuff from Christine above I'm sure all will agree. The rabbit has been time poor of late so a flying visit to briefly break the silence. The rabbit is faintly concerned by his continued interest in US politics - or at least its comedic possibilities and is troubled by information from the Washington Post via Laci the Dog (link to left) to the effect that it is alleged that Christine may not have been entirely - erm - truthful about her academic qualifications.
Say it isn't true!!!
O'Donnell's LinkedIn bio page lists 'University of Oxford' as one of the schools she attended, claiming she studied 'Post Modernism in the New Millennium' - as one does. But it turns out that the course conducted by an institution of the utmost obscurity known as the Phoenix Institute, which merely rented space at Oxford. No doubt as Christine is noted for her truthfulness there is an explanation. Just like no doubt there are explanations for no doubt unfounded rumours that Christine only got her degree last year after a load of unpleasantness in the courts about unpaid fees. Or the other no doubt unfounded unpleasantness about whether or not Christine ever did postrgraduate work at Princeton.
Oh dear! What can a rabbit say? 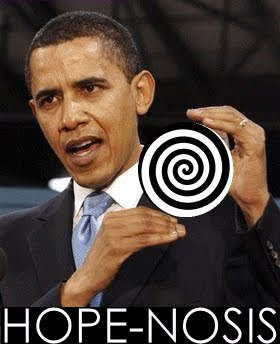 Well at least all is well in another corner of Planet Republican. The rabbit was pleased to learn that Republican U.S. Senate nominee Rand Paul belongs to a doctors’ group that among other -erm - curious beliefs has suggested that President Obama may have been elected because he was able to hypnotize voters.

Ah! That would explain things.

The rabbit is pleased to report that he has been invited to involve himself in the release of the film Conviction - trailer above. There is to be a gala screening at the London Film Festival on 15th October and the plot concerns one of the first cases of DNA being used as evidence. Hilary Swank plays Betty Ann Waters, a woman who devoted her life to earning a law degree to free her brother, Kenny Waters, from life without parole for a murder he did not commit. The film is to be screened in the morning but the rabbit is not quite sure what part he will play, possibilities include meeting Betty Ann Waters in the morning and/or and attending the press conference in the afternoon. The rabbit will report back.

Oh what fun! I wonder if Hilary Swank will be there!
Posted by white rabbit at 19:06

A great story and fantastic cast! Since you are "concerned with blood splatter patterns, bodily fluids and firearms residues," I am sure you will bring some expertise to the conversation. Have fun. We expect a full report after.

As for American politics, if nothing else, it indeed provides us with a many laughs.

Good to see you back, Rabbit!!

Im starting to like COD she would look good ina centre fold with Sarah palin. By the wat I have to tell you, CODDY is wrong in her assertions, believe you me, I should know...I have years worth of data to back up my findings. Hope time expands for you soon, I was on sheffield station platform the other day and thought of you in the trial of the century by phone.
Take care

Hey that screening should be fun! I hope you meet the stars!

this mess with the tea party folks and their candidates will get messier and messier, sugar! it seems playing fast and loose with the truth just might be a tenet of faith or at least a membership requirement! xoxoxoxo

(hope you get to meet hilary!)

Catchy/JoJo - I will report back on my adventure in cinema and, yes, Hilary Swank will be there to answer my own question.

Maven/Findon/Catchy - COD is giving me hours of innocent amusement. Not to mention mockery on her website - my latest offering is suggesting that her Democratic opponent (who is completely bald) is a one man Lenin tribute band. Response - a complete blank. How I can goad these people into a response is a mystery.

I'm glad they're making movies about his stuff, because it is so TRUE. My hub and I worked that arena and this is all too familiar. Except the part about the sister going to law school. In many many cases the DOC and their freaking fickle rule changes and oppressive nastiness even towards the families of inmates wares a person out. It's hard to imagine what kind of shit they put people through because they can. *In the name of "security". sigh.

Anyway, I will be seeing this one, you can count on it.

As for Planet Republican... well it's a good thing I haven't eaten breakfast yet.
peace,
pf

Little Flower - Indeed as regards 'security'- as the Jefferson fellow said 'he who trades liberty for security deserves neither and will lose both'.

As regards Planet Republican, I have attempted to start a thread on Team Christine's most excellent website stating that it is true that Obama hypnotised the electorate into voting for him. No-one has contradicted me so far.