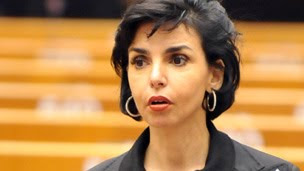 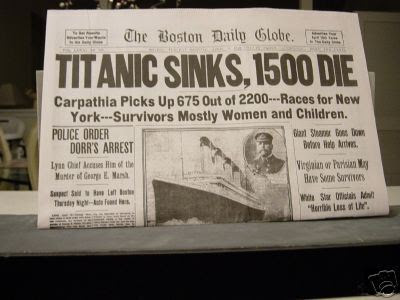 And further to the posting on the Titanic, the rabbit has been contacted by a person with very considerable relevant experience who writes...

'Titanic - from one who knows about these things, the two sets of orders gambit is rubbish - hard a starboard (or previously larboard) has always meant that.

The nearest ship, the Californian, had absolutely no real capacity to rescue everyone anyway. The exhibition at Harland and Wolf shows plainly that in terms of survival, money really did talk. The interesting thing is the idea that the ship was unsinkable - what an advertising campaign! So I think this story is worth a look but there have been even more noteworthy disasters in terms of avoidance than Titanic'.

So that settles that. I was somewhat puzzled as previously remarked on that the story took about a century - and the publication of Mrs Patten's book - to see the light of day. Prompted by my informant, I end with the good advice to keep on trucking. Memo to self: must blog on R.Crumb sometime...

As for the Titanic, the Ulster types will tell you "that she was in perfect condition when she left Belfast."

It didn't make sense to me how any sailor could hear "Hard a-starboard', and turn to the port, based upon whatever training that one person had. As a Cape Codder, I've spent a great deal of time on the water (in the 70's, 6th graders were required to take a mandatory Safe Boating Class), and I was extremely puzzled about that information. Starboard is starboard, not port, no matter what the circumstance.

JoJo - I was puzzled by this theory. Like you and my knowledgeable informant I would have thought that starboard meant that way...

Oh my! That is funny about Ms Dati's little Freudian slip! Or whatever it was.

Your side of the pond sounds much more lively than ours. ha!

I have no useful comment on the Titanic. Not that my other comments are really useful, but. I enjoy reading about it.
Peace,
pf

Maven - Yes they are. Never let it be said that it is anything other than informative here.

Stephen - I know. One can't move in Earl's Court these days without tripping over Aussies nuzzling on someone's kneecap.

Little Flower - And I enjoy you dropping in :D