Keep calm and carry on... 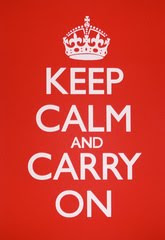 It will not have escaped the notice of regular White Rabbit readers that this blog has been under a particularly nasty form of troll attack over the past day or so. The target is not actually this blog in a direct sense but another blogger who comments here from time to time. The immediate cause of the troll attack is my posting congratulations on the other blogger's blog on his engagement. The troll has assumed the other blogger's identity and unleashed a load of twisted, sick bile. I can only wonder at the mentality of someone so eaten up with hatred for another. In any event, I have had to take a step I have never wanted to, namely activate moderation. Sorry people but I trust this will be a short term measure. the troll has been reported to the appropriate channels and hopefully will be taken out of circulation soon. I have a disparate group of bloggers who comment here. I am genuinely grateful that they respect this space - as I respect theirs - and do not exploit it to use the considerable differences in belief systems and world view among them to attack each other. I do believe in free expression and have let comments go that have made me wince in the past but this particular troll has forfeited the right to have his hate laden obscenities heard.
Now let's carry on as usual... 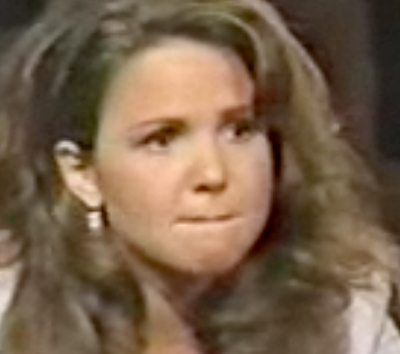 The rabbit is pleased to report that he is now a member in good standing of Team Christine and as such can post comments on her website. As regards her past financial difficulties, the rabbit has already advised Christine to take no notice and quote Oscar Wilde as per yesterday's posting: 'those who live within their means suffer from a lack of imagination'. Whether Christine takes this helpful advice remains to be seen but the comment has already attracted further comment. One person helpfully explains that this is alll the fault of something called the 'lamestream media', which would seem to clarify matters. Sadly, another person reports that people have been posting hate stuff on Christine's facebook page.

Ever helpful, the rabbit has posted the following comment:

"I'm very sorry to read that there have been hateful comments posted on Christine's Facebook page. Political differences are no excuse for bad manners, I'm sure all would agree. Toujours la politesse as the French - or cheese eating surrender monkeys as they are wittily known on your side of the pond - would say. Actually, you are fortunate to have distance between yourselves and the French. The English Channel (or 'La Manche' as the French impertinently call it) is only 22 miles wide at its narrowest. This results in an influx of French onion sellers on bicycles and attired in berets and stripy tops trying to sell strings of onions and garlic. This can be a considerable nuisance as I'm sure you can imagine".

I await a reaction. 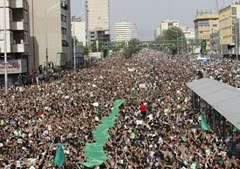 As a member of Team Christine, I can only deprecate this sort of stuff. Hands on the table, people thank youuuuuuuuuu...

Moving briskly on and asking American readers to bear with him, the rabbit has to mark the retirement of Andrew 'Freddy' Flintoff from all forms of cricket. The great man's body just couldn't take it any more. Apart from his huge talent, the crowds loved his physicality, wholeheartedness and power. The above clip is Freddy in Trafalgar Square after England won back the ashes in 2005. He's been up all night celebrating and is drunk as a skunk. The crowd are chanting 'you're pissed and you know you are'.

And who could argue with that?

The clip below is Freddy hitting an enormous 6 (that's like a home run Americanpersons) into the stand at Edgbaston. Not just into the stand but straight at his dad. What does his dad - apparently a decent club cricketer in his youth - do? He spills the catch, that's what. Amazing, lovely guy is Fred - I hope he has a happy retirement.

The rabbit has been vegging out on films on Channel 15 of late. Last night had Run, Fatboy Run, which was entertaining enough but somewhat spoiled by the fact that Simon Pegg isn't really fat. On Friday night there was The Untouchables, the 1987 one with Kevin Costner and Sean Connery, that is. It did strike me that the scene in the station when the two surviving untouchables close in on the Capone book-keeper and the pram - with child in situ - goes careering down the steps is lifted from Eisenstein's Battleship Potemkin. Here's the original...

And the step sequence in The Untouchables... You need to get about 6 minutes in.

It's good to see your humor is quite in tact. You do make me laugh.
Peace,
pf ps That bit about the French sort of cracked me up, even though I don't personally feel that way. My dad was in WWII and well, he did, so I get it.

Erm....where I have been? I haven't noticed any troll like comments here at all. How odd.

Also, b/c I don't really 'get' satirical writing (just ask Brian; he is so frustrated when I don't roll on the floor in hilarious laughter at Pastor Deacon Fred's website), I can't tell if you really are for Christine O'Donnell or just joking.

Pity the poor fool, all full of bile and hatred just because someone is happier than them and having a wonderful life.

Let us all be grateful we aren't that person.

All the best to you WR!

I was wondering about the troll. That shit is so annoying.

I actually hadn't noticed a troll here, but wish I had - I hate those douchebags!
I love that you're leaving comments at Christine O'Donnell's site- I think I'm gonna have to go take a peek....

Great catch on the similarity of the two scenes. Frightening tension in both. I had never seen the Einstein film before.

Regarding the other matters in your post - carry on.

So sorry about the troll business, Rabbit. There's always some lame individual who enjoys being the fly in the ointment. But, carry on we will! :)

Little Flower - It has been all go here. As regards the French, this was not entirely serious, I just wondered how Team Christine would react. So far they haven't. They seem a dull bunch of dogs and simply prate on with their obsessions. It may take more extreme tactics to provoke a response.

JoJo - Don't tell Christine - she would be terribly hurt - but it may be that I'm just joking! ;)

Tony - I have discovered matters relating to Christine's finances and will report soon!

Hank/Sybil/Catchy/Maven - Thanks foir kind words. Sybil - douchebag. Perfect. Says it all. You have a way with words...