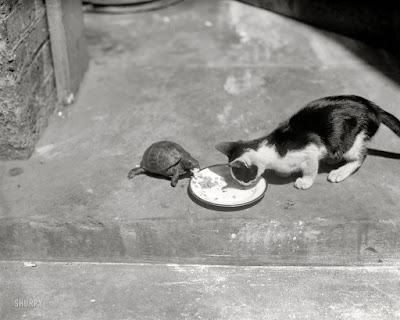 Just a short blog today - things to do! I have mentioned before how great the old photos blog Shorpy is (link to left). Check it out! As a taster and pinched from Shorpy is a photograph from 1922 entitled Shelly and Jezebel. No prizes for guessing which is which. At least neither is in a bin. I have blogged after raiding Shorpy once or twice before, including on a photograph from about 1900 of a strikingly beautiful young woman, pointing out rather ruefully that she would be about 130 now. So it goes.
Posted by white rabbit at 15:03

I remember that post and picture. I have wonderful old photos of several previous generations of my family. Perhaps I'll post some. I also own very old photos, of non-related persons, that I purchased cheaply at auctions. It is very sad to me when there is no family left or no one cares to keep the photos of someone's former life. They reveal so much.

I always feel so bad when I see old family photos in thrift shops and antique shows. It's sad that no one could find family members, even distant, to give those photos to, you know?

Loving that site... thanks!!

She Is Indeed beautiful.Ah , the Wonder of "The Older Woman"! Personally, I'm still getting over Clementina who I saw in Italy last year.......

Catchy - I was given a curious housewarming present when I moved into present accommodation. It was a horseshoe shaped leather box of the type men stored old fashioned detachable collars in. In it were a large collection of black and white photos of/by a man who had been in the British Army in Egypt in the war. There was also an information leaflet about Cairo. It read like the Harry Enfield spoofs that amused you recently. At the very bottom was an old ticket for an Amsterdam sex show!

JoJo - I have old family photos including a Victorian/Edwardian photo album. I got an elderly and now long dead aunt who knew some of the people and at least knew who they all were to write little notes which is valuable as otherwise I wouldn't have a clue.

Sybil - It's an absolute gem. there's always something new and worth seeing.

Tony - Oh dear. Only 18 and on a gravestone. You put up a lot of interesting old/family photos too.