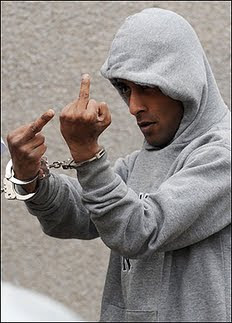 Here is disproof of the scurrilous suggestion by Charon (link to left) that this blog does not do law. It does plenty as will be gleaned by the following. Above is Mr Amir. As can be seen he is in handcuffs and is plainly not a happy bunny having been on the receiving end of the criminal - erm - law. Our man was arrested for assaulting his girlfriend and appeared at Aberdeen Sheriff Court yesterday (for the geographically challenged, Aberdeen is in Scotland - this is relevant). He made the news for what he said to police on arrest, namely 'I'm going to kill twenty of you and blow you to bits. Fuck you, you haggis-munching ginger bastards. I'm going to bomb you white fuckers'.
How impolite! The phrase 'haggis munching ginger bastards' caught the attention of the media. Amir got a total of 18 months in the nick for assaulting his girlfriend and threatening to stab a taxi driver.
It was said in mitigation that he had difficulties with anger management. Erm..... Quite so. It's not quite clear to me whether the gingerist outburst constituted a seperate racially aggravated offence but if it did, I have to say it is a bit over the top. The Scottish executive pronounced primly 'there is no place for racism in Scotland. It is unacceptable and will not be tolerated'. Especially of the gingerist variety. Above is a haggis that has been knifed to death - note the murder weapon still lodged in the unfortunate deceased haggis. It is about to be eaten by Scottish persons. 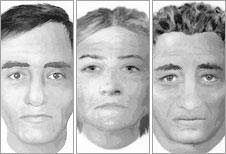 On a more sombre note, there is a sad story in the papers today that the British Transport police have released sketches of twenty of the unclaimed dead persons whose bodies have been found on the rail network or London underground. Above are three of the sketches. Most were hit by trains and there a total of 44 unidentiofied bodies from recent decades. It just struck me as terribly sad that someone meets their end - whether by suicide or accident - and no-one comes forward to claim them. Or even to help to identify them. La vie c'est triste - at least sometimes.

More cheerfully - unless you are an aged rock star - la belle Catch Her in the Wry comes up with a link to then and now rock stars. Warning - anticipating complaints about the pic of the haggis looking nasty, it's got nothing on some of the aged rock stars. Click on pic of chicken pieces. I commented on Ms Wry's blog that I am constantly amazed at the fact that Keith Richards is still alive - see below - this is not good. The rabbit has just got an I-phone for the first time. Now to attempt to set it up. 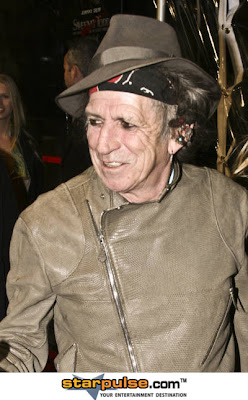 A knife to the stomach is never good, even if it is filled with sausage. I've never had haggis, but some say it is delicious.

I'm not sure Keith Richards is alive. He looks like a zombie to me.

I will never, ever eat haggis. That looks beyond disgusting.

Lots of people commit suicide by train here in the states as well. Although lately most of the train deaths have been morons who play chicken, or decide to put pennies on the tracks at the last minute, or walking on the tracks wearing an ipod.

It sickens me that Keith Richards is still alive (god that man is fugly...how would you like to see that greased up and coming at you in a speedo?), but Jerry Garcia is dead.

Catchy/Sybil/JoJo - Okay at least two of you won't believe me but haggis is actually pretty good. Yes I know it looks pretty dire but it tastes better than it looks.

JoJo - 'how would you like to see that greased up and coming at you in a speedo?'

Take a wild guess. It was the 15th anniversary of JG's death the other day. I had meant to do a short piece but quite forgot...

I know I can't believe it's been 15 years already. And to think we heard the ambulance go screaming by our house at 4:30 am that day and had no idea who was in it (the rehab place in Forest Knolls was only a couple miles from us in Marin).

Daft Bugger! Had He Said something racist about the English He would probably be playing in Goal for Celtic this weekend!

JoJo - I was just reading some bio stuff about Garcia. As you'll know, he was in a pretty poor state towards the end of his life. Apparently had to be reminded what song he was singing half way through. Richards just seems to have had the constitution of an ox.

Tony - This gets a bit lawyerish but I'm in favour of the existence of racially aggravated offences - in proper cases! - some sily prosecutions bring a sensible law into disrepute.

Maven - Go on! You know you want to really!

I can picture Keith eating a Haggis and rather enjoying it.

A close friend of mine recently passed at the ripe old age of 43. As I was struggling to come to terms, the thought that Keith was still walking the earth seemed very wrong. Not that I wish him any ill will, it's just.. well, you know, weird and somehow unfair.

I hear he gets blood transfusions... maybe that's the key...? PS Jojo, I really don't think I'd fancy anything greased up coming at me in a speedo! What an imagination! shivers!