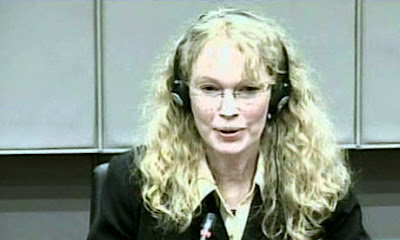 Here's the latest instalment on the Charles Taylor war crimes tribunal, which has heard a load of evidence contradicting Naomi Campbell's account (see below). Mia Farrow has given evidence and confirmed that she was at the dinner party with Campbell. She was played a videotape of Naomi Campbell denying with her customary grace receiving a diamond from Taylor (see below).

'Who said the diamonds came from Charles Taylor?' Farrow was asked directly by the prosecutor. 'Naomi Campbell', she replied.

It will be recalled that Campbell admitted receiving diamonds from an anonymous doner, so everyday an occurrence for her that her curiosity as to the identity of the donor was - erm - nonexistent. Now here thing start to get shaky. Farrow is talking about one big diamond. It will be recalled that la Campbell mentioned sniffily 'two dirty stones'. And it doesn't get any better under cross-examination. She is pulled up for describing Imran Khan as a 'soccer player'. She can't remember if Taylor was at the dinner. She can't remember her own son's age. She admits to having removed the words 'if true' from an article on the allegations against Taylor which she otherwise cut and pasted for her blog.

Oh dear. Defence cross-examination has made a serious dent in her. This is what we do and sometimes there can be blood on the carpet. Farrow isn't looking good. Enter Campbell's former agent, Carole White. She volunteers details of the dinner party.

'Naomi leant back and Charles Taylor leant forward. Naomi was very excited, and told me "he's going to give me some diamonds"' White told the court.
'They were being charming to each other. Mildly flirting'. Campbell told the tribunal she didn't remember 'pacifically' (sic) speaking to Taylor at the dinner. Campbell doesn't do pacific, as set out in previous posting on the topic.

'As I was getting ready for bed I heard some chinky noise at the window as if someone was throwing pebbles' White announced. 'We have something for Miss Campbell', she was informed. I told them to wait' she said. White told Campbell that the guys with the diamonds had come.

'She really wanted to let them in' White pronounced. 'The guys came in. I gave them a Coca-Cola each. They took out a scruffy piece of paper (complete with the diamonds). They were quite disappointing because they weren't shiny'.

One can imagine the disappointment. White said there were 5 or 6 diamonds. This contradicts Campbell (variously two or three) and Farrow (one big diamond, except Farrow didn't see the haul) 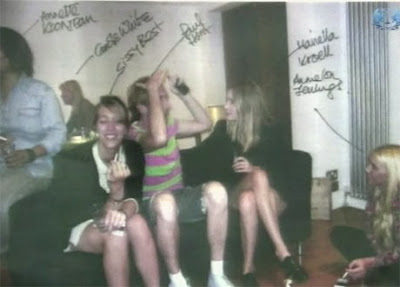 As per usual, things take a turn for the worse in cross-examination. White's staff ahve been posting pictures (see above) of a 'blood diamond party' over facebook. White was at the party but doesn't know anything about that. The party was to do with the purchase of a house for models. I must say I don't particularly buy this line of attack. It's not White's facebook page, it' someone else's. Why would she know about it? Her staff seem badly disposed to Campbell but this is no surprise (see tricky bit below)

Here's the tricky bit: White has a legal claim against Campbell worth around £600,000. 'You have a powerful motive to lie about her' pronounces Courtenay Griffiths (Taylor's counsel). Hmmm...

Not sure I buy that one either in the context. 'Would you have had an opportunity to meet Nelson Mandela, were it not for Miss Campbell?' Griffiths then asks.

Double Hmmm.... That's a bit thin in the rabbit's opinion. What does it go to? My overall impression is that Mia Farrow emerged from cross-examination looking somewhat flaky, White less so but she always had the problem that she is in litigation against Campbell and was always going to get a kicking in cross-examination on the topic. In the meantime, this procession of gruesome gargoyles gets all the attention. It tends to be forgotten that there are a hundred thousand dead and many, many amputees at the bottom of this story.

The Maven would like to make mention that this story is finally receiving media attention here in the US of A. 'Bout time.

Mia Farrow came off looking flaky because she IS flaky. And Naomi Campbell is a beyotch.

@Dental Maven - Maybe it's getting media attention in your part of the US, but not mine. :)

JoJo: where are you?

In observing the proceedings I was rather struck by the general procedural shambles attatched to what should be a court of the most extreme gravitas - it all seemed so lacksadaisical and sloppy; I've spoken with barristers who have appeared before the ICC who were of the same eye rolling opinion, but perhaps, until it gets a really solid body of jurisprudence beneath its belt, this is an opinion that may continue for some time.

In the meantime, I am rather of the sentiment that Ms Campbell is a self centred idiot who being so inconvenienced by what must be, in her view the complete and tiresome DRAG that is Genocide, Torture, Sexual Slavery and Child Conscription to say nothing its effect on her busy schedule of lamping percieved inferiors, managed to turn up a full two hours late to give evidence, and then made plain she wasn't about to co-operate.

Sigh. You can take the girl out of Streatham, but not Streatham out of the girl......

Dental - I'm in Washington State. You?

Isn't she kind of a whack job anyway? Somehow none of this is surprising to me...

ABC News in the US has been reporting on this for several days, including videos of the testimony.

Mia Farrow appears definitely flaky and Campbell appears to be narcissistic and a poor liar. These are the kind of characters American audiences love to watch.

I think most Americans were educated on the African situation by the movie "Blood Diamond",not by the news media.

When Your A Celeb Any Publicity is Good Publicity.Tis a shame The World Only Cares When Fashion Enters The Door.
Maybe Someone should kidnap Farrow, Campbell et al & plonk them in the middle of Palestine?

JoJo: I'm in the DC area. I think it was covered on Good Morning America today and of all places: People Magazine (egads)

Naomi Campbell is a c*nt.

Maven/JoJo - Glad we cleared that one (geography) up!

Minx - A little gem from you - Streatham is okay(ish) though. Especially as it's a Naomi Free Zone these days.

Catchy - 'Mia Farrow appears definitely flaky and Campbell appears to be narcissistic and a poor liar' Uh Huh, spot on!

Little Flower - Who is a whack job? Competition is intense at the Hague.

I'm sure there are many, as you say...but I was talking about Naomi.

Which is better Pepsi or Coke?
PARTICIPATE IN THE POLL and you could get a prepaid VISA gift card!