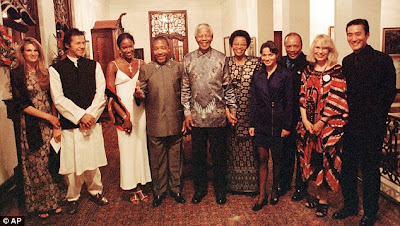 It will have escaped the attention of almost everyone until very recently that there is a War Crimes Tribunal going on at The Hague where the defendant is former Liberian President Charles Taylor. The fact that 100,000 people were murdered at the behest of this person, not to mention the mutilations and acts of cannibalism (apparently there was an incentive bonus of a 200 pack of cigarettes for the cannibalism thing) is apparently not very newsworthy.

Sorry, I forgot the 'allegedly'.

Until now. Naomi Campbell gave evidence before the Tribunal yesterday. She was not best pleased to do so and attended under a witness summons. It was, she announced, an 'inconvenience'. This is to be contrasted with the plainly lesser inconvenience suffered by Taylors 100,000 victims. Allegedly. For why was she there? Well in 1997 la Campbell attended a dinner hosted by Nelson Mandela. The pic above records the happy event. From left to right we have Jemima Khan, Imran Khan, la Campbell, Taylor, Mandela, Graca Machel, Blah, Blah, Mia Farrow and Blah. The happy event was something to do with something called the Blue Train but that's by the by.

Imagine our heroine's surprise when woken in the middle of the night after the dinner by two men at her door. She said they offered her a pouch and said it was a gift for her. And that was it. It contained uncut diamonds. This is important in the trial of Taylor as the prosecution want to show that he was involved with 'blood diamonds' (so called for the obvious reason). If the diamonds presented at our Naomi's door came from Taylor then there is powerful evidence linking him to the blood diamond trade. Campbell failed to oblige as is explained below and the case against Taylor was not advanced in this imnportant respect. The prosecution applied to have her treated as hostile. Courtenay Griffiths QC defending Taylor waxed indignant. The prosecution application failed but back to the main story.

Well, I said imagine our heroine's surprise when presented with the diamonds at three in the morning (or whenever it was). There was none, she announced. Her curiosity at this event was - well - nonexistent. It certainly did not run to asking the presenters of this gift who it was who was actually sending her the diamonds. Well you wouldn't, would you? Especially when the kind of event described was pretty much an everyday occurrence. Where Mia Farrow got the idea that Campbell told her the next morning that the men had said the diamonds came from Taylor remains a mystery. Presumably Farrow was hallucinating this conversation. It's the only explanation. Campbell helpfully further explained that she gets 'gifts all the time. Sometimes in the middle of the night without knowing who they are from'. Of course she does. Who could doubt it?

The case continues. I should say that our heroine is not unacquainted with the courts. Basically for hitting people. Any suggestion that she is low life is of course to be deprecated. Here she is modelling a particularly fetching community service smock after one of her court appearances.

I was reading about this on CNN earlier. I'm not sure I understand the connection b/t the uncut diamonds Campbell received and this Taylor dude. Who said the diamonds came from him?

And you are right, there is no mention of this trial in The Hague on our local news, and only a blurb on CNN. Probably b/c Liberia doesn't have anything the US needs or can exploit.

But, she said she's used to gifts of diamonds that sparkle, not looking like rocks. If indeed that is her history, then she would most likely have had many questions about a pouch of rocks as a gift.

Personally many times I have been awakened from my sleep and handed a pouch with a couple rocks, but the pouch never contained diamonds.

And what the heck is it with these Star types that arrive fashionably tardy for their court dates? Not only do they receive precious gifts all the time but silly things like deadlines don't apply to them.

...but The Maven's not bitter

The important appearance of Campbell as distinct form the minor matter of the rest of the trail for alleged involvement in mass murder, etc, was covered in detail on Channel 4 news in the UK. It should be said that Campbell (whether under the advice of Mia Farrow or not is unclear) gave the diamonds to a charity director, who rather than cash them in for the charity kept them. Perhaps he receives uncut diamonds so often that he forgot about the matter.
Would anybody wishing to give me diamonds please do so during normal waking hours and make sure that they are cut first.

JoJo - QC = Queens' Counsel. They are the top 10% of the English bar annd are awarded the title for being 'learned in law'. The rabbit is not holding his breath...

Well if Mia Farrow is to be believed Campbell told her the diamonds came from Taylor over breakfast the next morning. Campbell denied ever receiving the diamonds to ABC and flounced off Oprah when questioned about them. As per posting, she now accepts receiving the diamonds but states it is a mystery who gave them. I'd love to cross-examine her on the topic. I'd do it for free.

Catchy - She described the uncut diamonds as 'small, dirty looking stones'. Her distaste at such vulgarity is of course understandable. Erm - as to what wakes you in the night, I don't know what to say :))

Maven - I quite agree. The rest of us are supposed to keep to times unless there is a really good reason. But we are not important like her.

Mahal - Yes, the diamonds were supposedly handed over to a charity director. There the trail goes cold. Your request for gifts of diamonds to be delivered during waking hours applies to me equally.

SB - You may think that. I couldn't possibly comment. (Overseas readers - this is an English expression - from a drama called 'House of Cards' - meaning 'yup')