The Shire Hall and throwing stones... 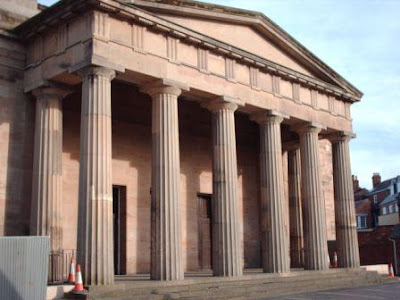 Only time for a very quick blog, I'm afraid. the rabbit is engaged in a trial at the Hereford Shirehall (pic above). In Court 1 at the Shirehall to be exact. The building is apparently the oldest working courthouse in England and is - cue spooky voice - haunted. Or allegedly as we say in the trade. I mention my trial being in Court 1 as that courtroom has an unique feature. On the wall is a hook where the black cap when not in - erm - use. For overseas readers the black cap was worn by the judge when passing sentence of death. The hook is still there but happily not the death penalty. Oh, and here is some more law related stuff via Charon QC - plainly after a glass. The rabbit accepts no responsibility for the attached (naturally)
I'm not sure if I've ever posted this clip of Throwing Stones (from the So Far video - now on DVD I think) before but it came to mind and merits repetition, if repetition it be. Penned by Brent Midland this must surely rate as one of their darkest songs and has visuals to match. In fact some of them test the boundaries of what is okay to put up to accompany a rock song. But have a look. There can't be many videos that feature variously, Hitler, Lenin, Nixon and Kissinger as well as a mandala, one of the windows (I forget its name) from St Peter's, Rome and some Aztec stuff - oh and Hiroshima. About 7 minutes in watch Garcia. He's plainly enjoying himself with one seriously chunky riff. At one point he growls a 'yeah!' like an old and contented bear.
Posted by white rabbit at 19:04

Sorry to be picky but Throwing Stones is a Barlow/Weir, not a Mydland. Great tune. Always a crowd pleaser too.

JoJo - I'm sure you're right. I thought it was Mydland. Shows what I know...

I wonder if one of the essential skills for getting a job as a ghost is a prior belief of an "after-life"? You would think in these political-correctness-gone-mad days ,that Equal Opps would require the job could be open to atheists too?
Although ,if I were an atheist,& found myself a ghost ,I would be seriously pissed-off!
Thanks,As Always, for The Dead.

Haunted courtroom? The Maven could only hope people would be more afraid of their date with justice than their dental appointment. :)