The Carbuncle Cup 2010 and Daleks 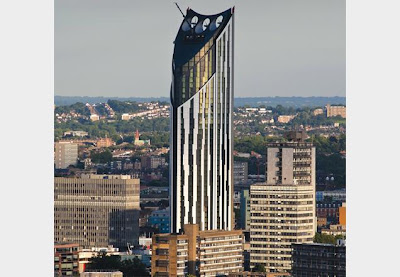 The Carbuncle Cup is an annual 'competition' for the ugliest building erected in the UK in the previous year. I put the word 'competition' in inverted commas as no-one wants to win this one and the thought of so doing makes all architects whose handiwork is nominated cringe with embarrasment. But someone was to be a winner. And the winner issssssss.....

The Strata Tower at the Elephant & Castle (inner South London) , by BFLS (formerly Hamiltons) nominated by The Georgian Group for its 'plain visual grotesqueness'. It must be said that the Strata Tower (above) does indeed look pretty damn nasty. Weirdly, it looks like a Phillishave electric razor. Is this the most bizarre piece of subliminal advertising yet? 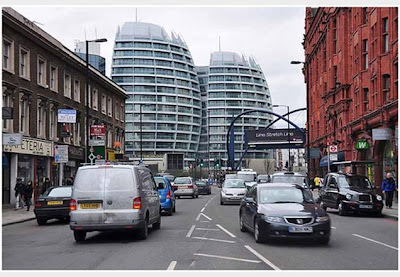 In second place comes another Inner London nomination, the 'most offensively ugly' Bézier Apartments by TP Bennett near Old Street. It does look rather like it is invading its surroundings, rather than blending in with them. Why am I thinking oversized Daleks?
EX-TER-MIN-ATE!!! 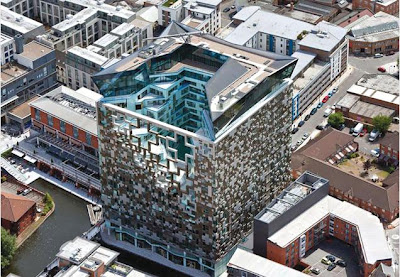 Not to be outdone, Birmingham made the shortlist with The Cube by Make Architects - supposedly a 'tribute' to the city's Jewellery Quarter. Huh? 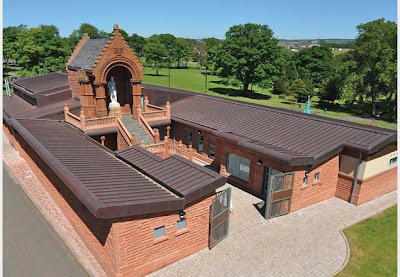 The first three above are all very urban and private sector developments but finally, here is a piece of municipal silliness, East Ayrshire Council’s Robert Burns Memorial Centre. If it had been built a couple of hundred years earlier, it would have been described as a folly.

I mentioned Daleks above, here is the Radio Times (that's the BBC programme listings magazine overseas persons) Vote Dalek cover. It was inspired by the 2005 General Election and a new series of Doctor Who arriving at the same time. It has been voted the best magazine cover ever. Vote Dalek? Maybe we unwittingly did. 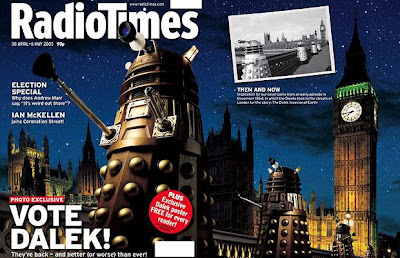 Oh and as a parting shot, take a look at the Hot Piece of Ass posting on sonia-belle - the blog with the great big muckystuff warning.
Posted by white rabbit at 17:52

East Ayrshire Council should know better – I doubt if those who allowed the Elephant and Castle and Old Street monstrosities do. As Burns said in his poem 'To a Louse':
"O wad some Pow'r the giftie gie us
To see oursels as others see us"
For those who find Scottish English difficult: "O would some Power give us the gift to see ourselves as others see us")

To think I wanted to be an architect! Yowza!!

Those're some butt ugly buildings, that's for sure and yes, they do look like Daleks.

I was gutted when Chris Eccleston left after the 1st season. I tried to get into David Tennant, but I love the first season best. Bad Wolf.

The apartment buildings should have won the prize. They do look like they are alien robots marching right into the neighborhood.

At least the Strata Tower's ugliness is much higher than all the surrounding buildings.

I followed the link to the HPOA post. Pretty funny. How did people get fooled with that? As for the blogger, I think she's fooling around too.

Oh MY GOD JOJO!!! THAT is exactly what I was going to say! We MUST be related!!

WR-- You did indeed post some very unattractive structures....but I liked the quitting HOPA chick. Very funny, even if it is a hoax. (And she, unlike the buildings, was attractive) :-)
Peace, pf

Yup. Those buildings are ugly. Always makes my wonder just what the architects were thinking.

Mahal - Odd idea for a poem I've always thought. He got the idea from seeing a head louse crawl over a young lady's bonnet in church one Sunday. All very odd...

Sybil - Well you could have done better than the above, I'm sure.

Catchy/PF - Yup, the Bézier Apartments are a real stinker. People were in-deed fooled by the HOPA thing - and as to what sonia-belle is up to...

Maven - perhaps a development resembling an enormous dental plate would make for some interesting architecture..

They are all ugly as hell.

Need To Boost Your ClickBank Traffic And Commissions?