Time for some law methinks plus Biff... 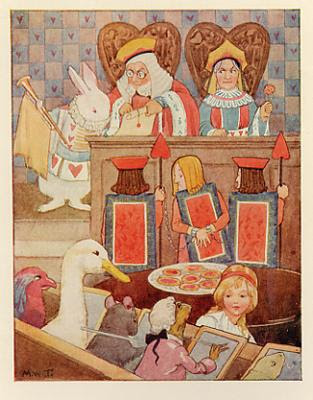 To maintain this blog's universal recognition as being at the cutting edge of - um - legal stuff here are (again, I put this up yonks ago but I'll just do two of my personal faves this time) extracts from real courtroom exchanges from Disorder in the American Courts by Charles M. Sevilla. Bear with me if you've seen these before, they've been round the block a few times.


I start with my personal favourite:


Attorney: Are you sexually active


Witness: No, I just lie there.


Attorney: All your answers MUST be oral, OK? What school did you go to?

Right. That's enough law for now. Biff came to mind earlier today, as things do. Biff is a cartoon thingy started by two guys called Chris Garrat and Mick Kidd. The dynamic duo communicate in a very postmodern manner: e-mail, fax and telephone. They rarely meet. Perhaps this is what gives Biff its surreal cutting edge. essentially it deals in incongruity, images reminiscent of 50s comics are mixed with philosophical, academic and psychological pretension to produce a deliciously bonkers mix. Above is one of my favourites from Biff's early work - a rebranding of Sartre's Being and Nothingness as some sort of romantic picture book - now with telescopic towel rail! I like the intrusion of the telescopic towel rail in this work of fiction - erm - existentialist philosophy.

Quite so. I equally like the idea of the laundromat of oblivion... Now for some newer stuff. 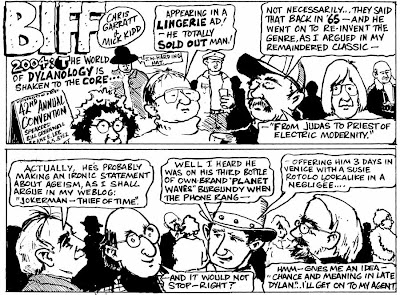 Here Dylan is belaboured for selling out - as usual. As will be gathered, Biff is basically about mockery. In this case mockery of the self-appointed pundit. Now bang up to date and in colour!

I just typed something so pretentious I have instantly deleted it. Biff has that effect...

There ya go - Biff meets Bertie Wooster. For the full kit and caboodle, take a look via the link.

Thanks for reminding me about Biff.
I used to have one in my collection that referred to 'That piss-artist I met in Marienbad last year'.
Great stuff.

The "sexually active" joke is a classic! Never gets old.