For the sake of completeness... 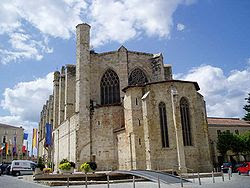 ...and prompted by Kaz, there is a town in France called Condom. It appears to have a nice Cathedral (see above). It is on the River Baise. Spookily, Baiser is French for - um - doing it. The French for condom, however, is preservatif - which sounds like jam or somesuch.

It's amazing what I'll do to avoid finishing this poxy written advice...
Changing topic, I don't know what I think of this story. A man named Robert Fidler lives on a farm in Surrey. He has built a mock Tudor style castle on his land (see below). I think it's rather nice. Additionally, it cost him £50,000 to build which is a tiny fraction of what a comparable house would cost to buy in leafy Surrey.
The catch? He didn't have planning permission. Now I know nothing about planning law save that planning enquiries happen in odd little places, that counsel can wear light coloured suits at them and it is a good idea to have a pair of wellies for site visits. Oh - and that it is not the least lucrative area of law. Doubleoh - and that the view that planning regulation and enforcement is a touch heavy handed is widely held. To say the least.


Mr Fidler argued that the bales and tarpaulin he hid the castle type dwelling behind were not part of the structure of the house (this apparently matters - the counter argument which succeeded in court was that the house was not completed until the bales and tarpaulins were removed and further therefore he could not rely on the argument that the building had been there for over four years without objection and was thus okay planningwise - I think it goes like this anyway). I probably end up on Mr Fidler's side despite the fact that it could be objected 'why does he think the rules don't apply to him?' It's a nice building, it was hugely cheaper than it would otherwise have been and how can it said to detract from anything. I also like his anarchist, two fingers raised attitude. He's appealing the decision. More power to his elbow! 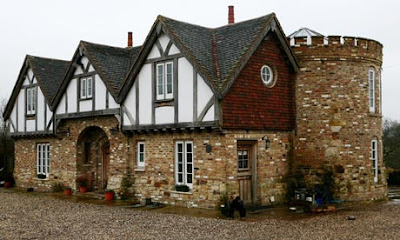 Oh and something for the weekend. Beaker's rendition of Ode To Joy. Very tasteful, I'm sure you'll agree.

I need to dig out that old post card with the caption "Un baiser de Bruxelles" (perfect for Euroskeptics). It seems that had a different meaning a la fin du siècle dernier (19eme).

You beat me to the Robert Fidler Castle post.

Planning pays even less than criminal law, which is "not the SW1 of the legal profession"? I'll tell that to my wife who wants me to make the move to that field based on my love of old buildings.

I'm for him for precisely the reason you mention. Add in that I have this Scottish Castle fantasy, which is foiled by Hysteric-- er, Historic Scotland. Let the man have his plaything!

You ARE on a roll this week! This post is all over the place!!

It's amazing any construction can occur unnoticed for so long as it did.

re Mr Fidler - I'm wondering why he didn't apply for planning permission in the first place.
Otherwise I feel some sympathy with the 'why does he think the rules don't apply to him?' curmudgeons.
(shuffles off muttering....)

The marvellously named Mr Fiddler must have thought that bad-taste, pretentious, nouveau-riche pastiche was so widespread in Surrey that nobody would notice it, but instead would concentrate on their usual pastime of bullying Gypsies.
Thanks WR for the contribution to high culture that the Muppets always provide.
Condom, a very pretty little city, produces some excellent Armagnac brandy called Janneau, which I recommend.

Little Flower - You smooth talker, you.

Renegade - The bales of straw and tarpaulin helped.

Kaz/Mahal - You aren't impressed with Mr Fidler! I think the building is actually okay though I'm not sure I'd build something like that if starting from scratch.

The muppets add much to the gaiety of nations :D

Absolutely right about the Muppets WR: Who could watch the clip and not think: "Freude, schöner Götterfunken, Tochter aus Elysium!"? Beaker should definitely have got an Oscar for his stunning supporting role in the Muppet Christmas Carol – a lot more convincing than many an Oscar winner!
As for Fidler, I (rather optimistically) hope he keeps the local planning department so busy that they stop bullying Gypsies.