Wikipedia to the rescue. I copy and paste.

'The term wanker originated from British slang in the 1940s, based on the verb wank. Wanker literally means "one who wanks (masturbates") It is normally intended as a general insult rather than as an accusation. It conveys contempt, not commentary on sexual habits. Wanker has similar meanings and overtones to American pejoratives like jerk and jerk-off. One connotation is of someone self-obsessed or a show-off. Another implication is that the wanker is unable to find a sexual partner'.

Now continuing the educational function of this posting, I further report from Wikipedia.

The picture above will help practising this gesture. It is the most common gesture exchanged between British motorists. It may be that some intrepid North American readers may care to introduce it to their continent.

It is further recorded that The - Erm - Winker's Song by a person named - Double Erm - Ivor Biggun made it to number 22 in the British Singles Chart in 1978 despite, or perhaps of, being banned by BBC 1.

Further gems from Wikipedia: 'Wanker is also a German surname, according to the 1990 census "Wanker" is the 53,492nd most common surname in the United States' Quite so...

Some sitcom called Married ... With Children featured a fictitious Wanker County in Wisconsin.

It further emerges that there was a saloon in Oregon called Wanker's Corner.

As regards usage, Wikipedia further reports 'In December 2000, the Advertising Standards Authority published research on attitudes of the British public to pejoratives. It ranked wanker as the fourth most severe pejorative in English. The BBC describes it as 'moderately offensive' and 'almost certain' to generate complaints if used before the watershed. In Australia it is considered mildly offensive but is widely accepted and used in the media'.

'Mary Cresswell, an American etymologist, describes 'wanker' as "somewhat more offensive in British use than Americans typically realize. The word was used twice to comic effect in the Simpsons episode Trash of the Titans which caused no offence to American audiences, but prompted complaints on occasions when the episode was broadcast unedited in the United Kingdom'.

I'd better stop now. I'm doing this in chambers (my place of work) and my colleagues have got the giggles.

I note that Don Everly - not a wanker I hasten to say - was 73 yesterday. Here he is (complete with Phil)...


I had vaguely thought of posting what Blair really meant before the Chilcot enquiry 'Okay stooges, now you're not here to make any trouble are you? good!' Etc. Etc. But here is Beau Bo D'Or's comment. Link to left as usual. Nuff said. 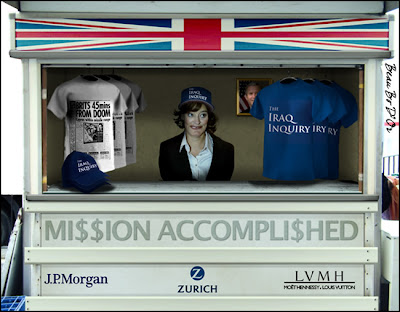 in chambers? oh my, sugar! seems like that would be a more solitary assignment... ;~D xoxoox

Who can forget that great songster Ivor Biggun and his backup band the D-Cups?

While the Iraq Inquiry may be a circle jerk rather than just a wank, it is a whole lot more than what the Yanks are doing.

In fact, I don't think the Yanks know exactly WHAT they ARE doing!

Americans give a middle finger gesture in their rear view mirrors.It's so much easier.

I guess I've watched too much British comedy. I didn't need the explanation of wanker, but I surely did enjoy your post.

I do the Wanker gesture when I'm driving too. Usually accompanied by my middle finger while a torrent of filth spews forth from my mouth. lol

Savvy - Chambers as in rooms. The archaic word survives for barristers (strange to say !)

Laci - Erm, quite so. Whatever hapopened to Ivor? I think we should be told.

You wanker you! ha!

I loved this post. Glad to have served as muse.
xo pf

Waste of time, I mean.

Have you seen my posts about a certain Austrian town?
http://lacithedog.blogspot.com/search/label/fucking

Little Flower - Having ammuse must be fun. Robert Graves had one yenno....

Earl - I don't know why people slag off Wikipedia. I think it's a brilliant idea and usually works pretty well.

Laci my little four legged friend - ermmmmm - Googled the link and just got something about Mormons and retrospective baptism - mildly interesting but nothing to do with fucking.

I also googled laci fucking - You would not believe what came up...

I get it now with the help fo Mr Google.

i knew that, sugar! i adore rumpole! i was making a joke! *sigh* xoxoxoxo

Need To Increase Your ClickBank Banner Traffic And Commissions?