The rabbit will not be sending Valentine's cards this year...


I do have an aversion for the kind of gleeful Muslim bashing that certain sort of right wing blogs seem to make a life's work of but occasionally something comes up so bonkers that comment is - if not inevitable - at least appropriate.

Say hello to Egyptian cleric Hazem Shuman. I wonder if he is any relation to Robert Crumb's Shuman the Human. Anyway our man has a view on St Valentine's day. He is against it. He has called on Muslim youth to 'confront [the] Valentine virus' - which is apparently worse than AIDS or Ebola. Our man elaborated that while 'everything red will become more expensive' for the holiday, 'one red thing will become cheaper: the blood of Muslims. All this is the result of the sins committed by Muslim youth'.

Oh dear! Apparently St Valentine's day 'destroys our relationship with God'. I am beginning to ever so slightly suspect that our man has a talent for exaggeration.

His Shuman-ness is not alone in the Muslim world. Saudi Arabia has asked florists and gift shops to remove all red items until after Valentine's Day, calling the celebration of such a holiday a sin.

Unsurprisingly, a black market in red roses has flowered (so to speak).

'As Muslims we shouldn't celebrate a non-Muslim celebration, especially this one that encourages immoral relations between unmarried men and women', Sheikh Khaled Al-Dossari, a scholar in Islamic studies, helpfully explained to the Saudi Gazette.

Sometimes a sense of proportion would come in handy. I'll refrain from further comment save to say that St Valentine's day really has become a pile of overblown commercial tosh (but that's all - I'd sooner have Valentine's day than Ebola, thank youuuu...). When the rabbit was a small rabbit, the idea was to send Valentine's cards anonymously to the discreet object of desire who then may or may not have sussed out who the sender was. Now it seems to have become a kind of super Hallmark Holiday to the delight of chocolatiers, florists, restaurants (full with glum looking couples eating in near silence) and of course the manufacturers of greeting cards. The cards are not sent out anonymously to women with whom the sender desires - or dreams hopelessly of - a relationship with any more but rather seem to be sent to renew existing relationships. Sort of like the relationship equivalent of renewing the TV licence or MoT. The rabbit will not be sending Valentine's cards this year. Below is a Victorian Valentine's card. 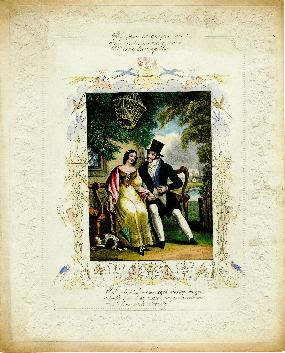 Oh and for JoJo and Fleur...

Valentine's virus eh?
What a perceptive chap.
Never mind - yours is in the post already :)

Valentine's Day depresses the shit out of me, because I am single and loveless this year.

In Illinois, USA, Valentine's Day brings thoughts of murder that took place in Chicago in 1929. A great deal of red was spilled that day. As a result, a drink to the end of prohibition is called for on Valentine's Day.

Kaz - I keep looking at the doormat hopefully...

Sarcastic person - Yours is on the way...

Catchy - Yes, I'd quite forgotten the St Valentine's Day Massacre. And very bad behaviour it was too...

As the old gay said about the First World Wart 'Oh my dear! The noise! And the people'

Rabbit!! How sweet you are! Thank you. I am late to the party because I was out of town at a wedding.

I hope you had fun on Valentines day!
You made me giggle.
Peace,
pf