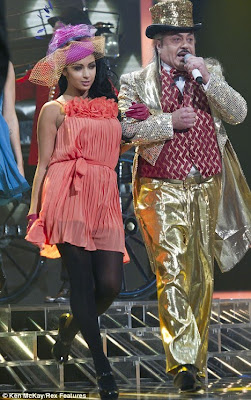 At the risk of being accused of being a snob or cultural elitist (moi?) the rabbit has to confess that he has never seen the X-Factor on tv. This has not prevented a bloke called Wagner Carrilho (above) coming to the rabbit's attention. He is a contestant on the X-Factor. Apparently he is an awful one. He can't sing, can't dance and can't do anything well generally. Apart from that, he is a 54 year old double glazing salesman and that's about it. How has the great British puiblic reacted to this state of affairs? By voting for him over and over again to the horror of the judges who apparently can barely disguise their distaste and are anxious for him to go away as soon as possible.

But he won't and there's nothing the judges can do about it. Not so long as the public keep voting for him. What exactly is going on here? And why is something similar happening on Strictly Come Dancing? 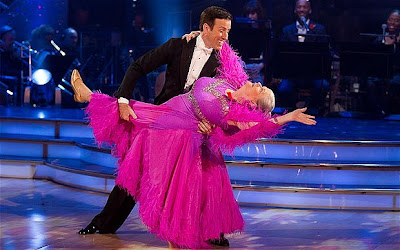 For overseas readers and the terminally inattentive, the large purplish blob above is called Ann Widdecombe. The aforesaid Ann Widdecombe, a retired Conservative politician is a contestant on Strictly Come Dancing. Before this, she was simply known for (a) being a 63 year old virgin (b) converting from the Church of England to Roman Catholicism in fright at the idea of women priests (c) some unpleasantness when she was Prisons Minister involving pregnant prisoners being shackled to the delivery bed when giving birth (d) looking like a hippo. Oh and the counterintuitive bit is that she is against foxhunting. Now the rabbit has actually seen a little of this programme and can comment on Widders (as she has become affectionately known since she became national treasure and everybody's favourite batty aunt) dancing abilities.

Can she dance? Nope. She is crap.

Has this stopped the public voting for her in the face of noisy condemnation from the judges? Nope. Comparably talentless political journalist John Sergeant withdrew last year (or whenever it was) when it looked like there was a serious danger that he might win. Widders has no such scruples. She's in it to win it.

Now there is plainly a pattern here. Why is the public kicking over the traces? Well, firstly, the British love a loser. It's hardwired into our DNA. As is irony. There is plainly a pair of ironic statements going on. Mostly, though it seems to be about blowing a very loud raspberry to the professionals in general and Simon Cowell in particular. There is a 'Wagner to Win X Factor’ facebook page with 44,600 members (and no doubt rising) run by a 39 year old named Mark Mordue who lives with his mother in her Newcastle council house (bless!). ‘I can’t wait to see the look on Cowell’s face if Wagner wins. I hope it teaches him a lesson' announced Mark. 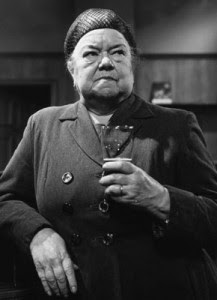 The rabbit can only declare his satisfaction that the lunacy factor keeps cranking up nicely and express the hope that the great British public keeps voting for the no-hopers to the continued rage of assorted self-important professionals.

Turning to matters cricketing, the rabbit has not commented so far on the First Ashes Test in Brisbane. This is not through lack of interest but because - one way or the other - he can barely look. 'It’s not the despair. I can cope with the despair. It’s the hope. That’s what’s killing me' – John Cleese, Clockwise. At the end of day 4 the scores stand at England 260 & 309/1, Australia 481. It will almost certainly be a draw. Yes, a sporting contest that lasts 5 days and does not produce a result may seem weird - but in the case of the present Test also utterly compulsive. This is as good as it gets. Above is a group of Barmy Army (travelling English supporters) making a lot of noise on day 1 - and obviously annoying lots of elderly Australians.

Oh and with Hat Tip to jailhouselawyer for introducing him to them, the rabbit has become a big fan of the Daily Telegraph animal pictures of the week . The link has this week's crop. Particular fun are images 7 (a bull being chased by a crane) and 11 (a pelican with a beer bottle).
Posted by white rabbit at 13:16

The same thing is happening on US reality television shows. The shows encourage the public to vote, but the producers really only want the votes to go to certain talented people. So the public revolts and votes for the underdog, the untalented or the most annoying. The same thing happens in our political elections. ;-)

Catchy - Quite so. Maybe the US populace will duly elect Sarah 'Our allies in North Korea' Palin on this approach to things...

I absolutely loathe these neverending talent shows. I don't understand the public's fascination for them at all. I have never, and will never, watch American Midol..I mean Idol.., Dancing w/ the Stars, America's Got Talent, ad nauseum. It's all garbage and tripe. You can lump all those horrid Real Housewives shows in w/ that as well.

I pretty much hate all the shows where people call in to vote. I don't watch them and I never will. If I wanted to watch people sing badly I'd go watch karaoke in a bar somewhere. Same with bad dancing.

That purple dress is AWFUL, though. It's well known that she's a 63 year old virgin? Gah. That would SUCK.

Don't worry, WR, you're not the only one. I've not sat down & watched x factor either.

Sadly, I've not missed each and every show of SCD so have had the misfortune of seeing Widders strut her stuff. And I agree, it's not pretty.

True, the Brits love an underdog but we also don't believe in flogging a dead horse. Hopefully the penny will drop with the voting public soon on that score and they'll see widders for what she really is.

It's a pity she isn't still sporting that legendary basin cut from the 1990s. And whenever I hear her name, always think of this => http://www.youtube.com/watch?v=14ywPDqWrHU

WOOHOO I too have never watched an episode of this Xfactor...and yet I can give a very acute response on how much I dislike and dissaprove of it and the people who work their whole weekend around it :)

I met and debated with Widdecombe once - I thought she was like a walking record-player; not interested in reasoning with anyone. She proselytises without self-reflecting. She really does give off the impression of being unhinged somehow.

JoJo/Sybil - I agree - they are utterly loathsome wastes of transmission time. It's just they loom very largely at the moment...

Michael - Blimey! Had a look at the link. Better Victoria Wood than Widders.

Finn...finn - Welcome to my humble bloga and quite so...