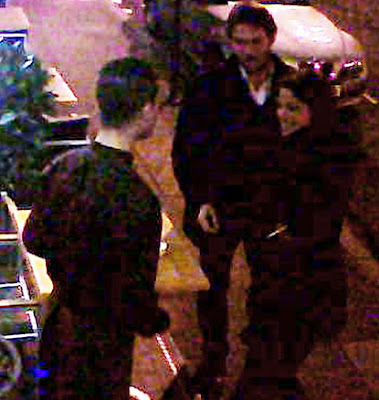 The couple in the CCTV still above have just nicked out for a cigarette break between their second and third courses (this used to be known as a 'Princess Margaret' after the that person's habit of having cigarettes between courses) at top London restaurant L' Autre Pied - which for non-Francophones translates as 'the other foot. Don't ask me why the restaurant is called the other foot but it is. They have tucked into a bottle of pink Larmandier champagne at a modest £124. Plainly considering this refreshment too modest by half our couple also slurped their way through a bottle of 1997 Bollinger priced at a mere £285.

Then came the cigarette break. the staff sportingly helped them on with their coats. A plum tart and millfeuille was delivered to their table.

They never returned to eat the third course. They legged it leaving a bill for £572.74 unpaid (that's $908.96 American persons!). The restaurant's general manager is quoted as saying 'their bill was an average spend. Nothing was out of place or unusual'.

The weird thing is that they booked the table in the name of Lupin, seemingly a reference to Arsène Lupin, a fictional French gentleman thief. Police are looking for the couple and the one detail they may have overlooked (see above) is that there is CCTV everywhere these days. That was the mistake Mary Bale the Coventry cat binner made as readers may recall.

While on the subject of very expensive rounds, Australian cricket sponsor Victoria Bitter has promised free beer for every Australian adult if Australia regain the Ashes. Somehow this very expensive promise suggests that they don't think it's going to happen...
Posted by white rabbit at 19:29

I doubt the couple will get as much public scrutiny as the cat lady. The couple is rather good-looking and the public most likely has disdain for a snobbish restaurant. I think they are off the hook; no one will turn them in

I think VB is on a winner. There will not be any payout this series. I would vote for a free VB for every Australian when we hand, draw and quarter Ricky Ponting in February.

I hope they're caught. I got a problem with people who steal.

Drinking nothing but cheap booze is just as enjoyable and no more unhealthy. Why cultivate a useless expensive taste?

I am on a one-man campaign to rehabilitate the word 'decadence'. It used to have a moral meaning; now thanks to chocolate advertising it means 'harmless indulgence'.

I don't wish to promote vulgarity and coarseness as a virtue. But it is hard not to find fault in the spectacle of a privileged class spending massive resources on base pleasures and distractions while half the population struggles for the basics of survival. Are we really to believe that these people are so much better than everyone else that they 'deserve' it? Does disposable income equal personal merit? Or are our claims to economic meritocracy completely false? Are we going the way of oligarchic Russia and too befuddled to care any more?

The entire logic of the government's budget-cuts depends on the concept that there is only so much money to go around: that money is like a pie that can only be sliced up so many ways. More for one person means less for everyone else. So the government decides that the budgets of various departments have to be slashed in order to free up money for the country and to pay off bankers.

But what of all the private wealth held by the rich and especially by the super-wealthy top 1%? Surely this too is of the same 'pie' and therefore unavailable for everyone else? And isn't this money hoarded in accounts and large assets, unlike the wealth of ordinary people, which mostly gets ploughed back into the economy during the weekly shop?

Is there really a sane reason why we are not taking the necessary funds from the super-wealthy, including the bankers, instead of scraping cash from public services and benefits?

And here is a question for us to seriously ask ourselves: if my government won't provide me with a job or look after me when I have no job, why do I owe my government any loyalty or cooperation at all? What kind of social contract are we left with now? If we are now living in a state of total selfish individualism, on what rests the government's moral authority?

That takes liberties with the topic of the post, I know I know - forgive me.

That is one serious Chew n Screw.

I'm almost happy for the UK to win if it means I don't have to drink VB.

I can't believe they didn't return to finish the plum tart and millefeuille! ;-)

I wonder if it was taken back to the kitchen, spruced up and re-served? The restaurant had some serious losses to start recouping after all!

I suspect it wouldn't cost VB all that much to give out 13 million or so servings given that there's little chance that VB is charging themselves retail price and there's a serious amount of profit in mass production lager. I'm not sure how retailers feel about people coming to their store to redeem a free coupon though - do they appreciate the extra foot traffic? That might be an extra discount or an extra cost.

I've always wondered how common that sort of antic was in very busy restaurants. But wowie, that's a sizable bill for dinner and drinks!

Catchy/Pearl - they have been caught. You get your wish, Pearl!

G - You are forgiven. the comments are for - er - commenting. I sort of take your point. The drinks sold at the other foot are beyond reason pricewise (this is probably why a lot of people are out of sympathy with the restaurant despite the blatant dishonesty involved) but I'd sooner have a decent bottle of - say - Malbec than nasty plonk or - dare I say it? - VB.

JoJo - Chew and screw! Love it! Does 'screw' also mean - erm - sexual intercourse in the states too?

Sybil - That must be it. The original foot was - erm - stolen. Probably by the same couple.

Michael - As regards the fate of the uneaten pud, it's an interesting question. They had some losses to make up...

Maven - read on today's posting as to frequency of this sort of thing?

And as regards VB...

Badger - A little unkind perhaps? Ponting may be an annoying chipmunk faced twerp but he must be up there with the all time greats as a batsman. But as to his captaincy...

Unique - I don't think it's actually compulsory to drink the VB in the event. Being an old hippie I drank Coopers mostly when in Oz. Swan is the least bad of the mainstream beers IMO.

Stephen - Welcome to my humble blog. Thinking about it, I agree that though it sounds a big deal as an advertising stunt it isn't that hugely expensive should it actually come about. I suspect there's something in it for the retailers, directly or indirectly.

White Rabbit: some booze is so horrible it's not worth drinking; I would not force vinagery wine on anyone. I was thinking more of the tenuous and discredited notions of connoisseurship:

Like I said; I don't try to appropriate coarseness as a virtue, like George Orwell with his tins of Bully Beef (bless him) but an exessive love of refinement is problematic.

Screw does mean the same here in the states, but we also say "they screwed me over". So a chew and screw is screwing over the restaurant. The less crude expression is "dine-n-dash".

Didn't Dr Pepper do something similar to that Autralian Beer Company here in the UK? Sometime earlier this year if I recall...

After doing some online research, I've ordered my first e-cig kit on VaporFi.