Okay American readers - this is (sort of) about cricket but bear with me. Hostilities resume in the greatest sporting show on Earth - The Ashes - on Thursday and the rabbit cannot wait. England have not won in Australia since 1986/7 but start as slight favourites. All is well in the England camp as can be seen from the above video diary by Graeme Swann who - as well as being the best spin bowler in the world - is a natural comedian. At about 8 minutes into the clip, the team introduce an unsuspecting world to the sprinkle dance. Take a look! Amusingly and amazingly, the sprinkle dance has wound the Australian media up - they are complaining that the insolent Poms are practising their victory dance before - erm - winning. Nice to see the Australian media in such a febrile state of mind.

I must confess to never having heard of artist Len Shelley in life but only discovered him through obituaries following his recent death. A number of his best-known works were three dimensional 'art in a box' as above - the splendidly titled Father Built Me a House But Decided to Live in it Himself. 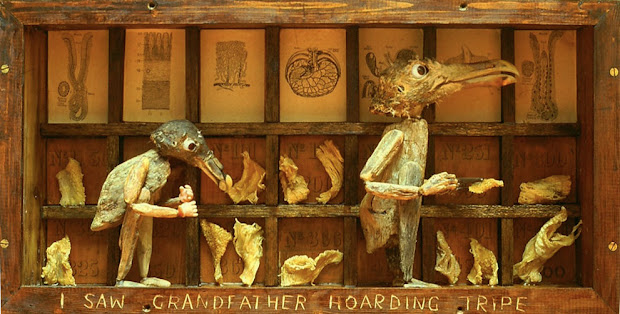 Not to mention the even more wonderfully titled I Saw Grandfather Hoarding Tripe.

Or Leather Things Flap Their Wings at my Window. Of course they do. 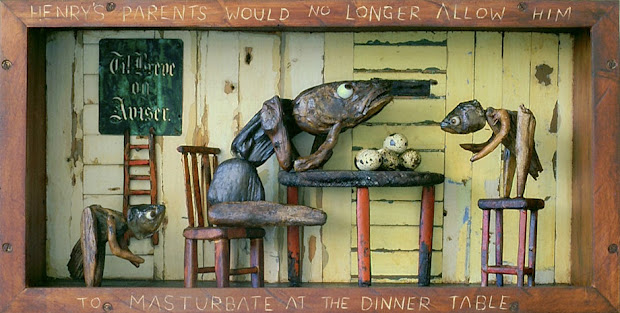 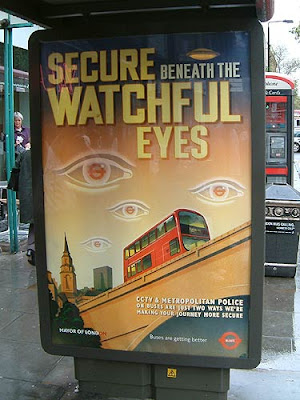 Finally, while on the same - ahem - subject and without further comment, Mahal has drawn the rabbit's attention to an inevitable consequence of the surveillance state.
Posted by white rabbit at 15:52

Okay, I'm looking Len Shelley up. Those are great.

This is our day of admiring unusual art. My post was about tiny graphite pencil sculptures.

I wonder who inherited grandfather's tripe collection after his death.

No wonder my friend now live in Northampton goes on about cricket - and not in a good way. :)

The masturbatory link (I presume) isn't working for me! :(

My friend who now lives in Northampton - geez... sorry about the terrible sentence!

Hank - Quality or what?

Catchy - Indeed. There is much to be said for a stock of old tripe, I often remark.

Sybil - I just checked the link. It seems okay but here it is anyway...

And as for your friend in Northampton...

I love the artwork.

I would have those in my house; they are very Eraserhead.

Institutional dehumanisation and indignity will only inflame anti-government movements like the Tea Party, which will ironically lead to even more oppressive forms of government.

This security paranoia stuff is a massive industrial-political lobbying-complex in its own right now.

Fantastic art! Never heard of Len Shelley either, but those are terrific!

Hey there - I used to live with Len. He was a great man. Here is a link to some reflections I have on him: http://richardpurnell.wordpress.com/2010/11/30/len-shelley-rip/

I knew Len Shelley, he was both an amazing artist and a very special human being. His art inspired me and made me laugh at the same time. We all miss him so much!