Of weddings and arrests... 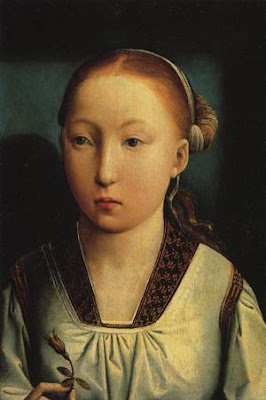 Above is a portrait of the last person called Katherine to be Queen of England - Katherine of Aragon here painted by Jean de Flandes as a mere Infanta. She looks pretty fed up doesn't she? As well she may have been as she was to be unceremoniously De-Queened or whatever the word is by Henry VIII with the connivance of Archbishop Cranmer, later to become an irritating blogger so that Henry could have his way with Anne Boleyn whose 'paps' (sic) he wanted to get his paws on. Well no doubt he wanted to get his paws on the rest of her too but the rabbit digresses. Anne Boleyn met with an even more disagreeable fate, namely having her head whacked off for adultery - probably on a bum rap but now the rabbit is digressing hugely.
To cut to the chase, a person calling himself 'Prince William' has got engaged to one Kate Middleton who we are now to call 'Katherine' who is thus in the frame for Queen in due course. Now the rabbit is not going to launch into a graceless anti-monarchist rant. They seem a pleasant enough young couple and at least the Prince William person cannot help the circumstances of his birth. The rabbit wishes them well. The rabbit also wishes (no doubt utterly in vain) that the most demented media overkill on the topic will go away. I am bored already and really not interested. Enough! What grates with so many people is that we are being told by the media in general and tabloid press in particular how to feel. And 'indifferent while wishing them no ill' is not an acceptable emotion. The rabbit was however pleased to see that the Daily Sport was already lowering the tone this morning with FURY OVER ROYAL KATE NAKED PHOTO, which shared the front page with the no doubt equally pertinent and informative MAN GETS CD STUCK UP BUM. The rabbit was pleased to learn that Kate - sorry Katherine - has an apparently embarrassing relative who is named Gary Goldsmith and lives in Ibiza in a house called La Maison de Bang Bang. The rabbit looks forward to hearing much from - and of - him.
Seriously, monarchy is infantile drivel. Grown-ups live in republics. So long as the head of state is elected and for a fixed term then the rabbit couldn't care less if the head of state is Lemmy from Motörhead. Actually that would be a seriousy bad idea. But at least it would be a democratic bad idea.

Meanwhile the male half of the couple featured in yesterday's posting has been arrested at L'Oranger restaurant after running out leaving behind a £1,000+ bill but was detained by waiters. The woman was arrested at a flat in Stoke Newington. It turns out that this was the fifth time the couple - who are from Latvia - have pulled this skank. In addition to the two already mentioned an £800 bill was left unpaid at the Michelin-starred Hélène Darroze at the Connaught in Mayfair plus - erm - visits to the Glasshouse in Kew and Pearl restaurant at the Chancery Court Hotel in Holborn, each time slipping out for a cigarette break before vanishing.

It strikes the rabbit that like a lot of criminals their undoing was not knowing when to stop. Below is the scene of their demise. 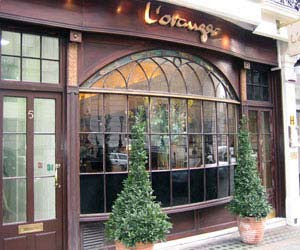 I've been anticipating this post from you on the newly engaged royal couple and your response was exactly as I thought it would be.

American TV coverage this morning was almost entirely about the couple with in-depth analysis about wedding date, place, dress, etc. As you indicated, they seem a nice enough couple. The media should leave them (and us, please) alone.

Yeah - it's overkill on the Katherine and William story here, too. I'm pleased for them (I guess), but I could really give a rats' ass.
Lemmy would be AWESOME!

If you think the Wills/Kate story is overblown now, wait till the wedding.

I sure hope she knows what she's in for. The media will hound her like they did to Diana. Who everyone called Di so what's the big deal calling her Kate?

I'm already tiring of the speculation and adulation of the new royal engaged couple, too. No offense to William, who I adore, simply because he was fortunate enough to be Diana's son.

I can only imagine what you are enduring over there. My sympathies.

I am amazed that interest in the monarchy persists at all. If I started wearing a crown everywhere would people eventually come to believe I'm important and care whether I get married or not?

The restaurant scammers were committing crimes for irrational reasons so they were bound to make such a mistake. No risk, no thrill I guess.

Having a Head of State called George W Bush or Nicolas Sarkozy is a worse idea than having one called Lemmy from Motörhead.

At the risk of pedantry, Henry married another 2 Katherines, one he executed, one outlived him. The last Queen Katherine was the wife of Charles II. As a republican I'm hoping that whichever Katherine it is, will remain the last Queen of that name as we'll have become a republic by the time William might be eligible to be King.

I cannot help but feel that, with the advent of a major paliamentary debate forthcoming on the sordid topic of university tuition fees, the announcement of the engagement of William " I am too THICK to study the History of Art" Wales and his putative Bride has been planned as a diversionary tactic given that shes had the rock for over six weeks, and that the Condemns saved the announcement until just this very time, when lots of people are very, very cross with them.
If I hear any more tales of how they fell in love shopping at Tesco's ( please. just how stupid do they think people are?!) I do believe I shall throw up.

As to the tale of the hapless crims who have dined in some style prior to being caught bang to rights, so to speak, well, at least they got to eat in places I can only dream of/aspire to.Having said this,spending £1000 pounds on food is quite obscene, and the province of the Super Rich, who live in a bubble of privilage and have no idea how the real world actually works.

Right then.Now that I am in Angry Mode, I am off to a tuition fees demonstration sit in, followed by a carb loaded repast of of Cheese, Chilli and Chips at the local fish eaterie (£1.25, ENORMOUS servng).

I learned to love the monarchy while living in the States. The presidency is a worthless position given that he is at the will of the legislature. It makes far more sense to have a head of state that is a consistent entity, which the monarchy is.

Thus the monarchy can provide for a celebrity diversion and be the official greeter leaving the politicians to actually running the country. Princess Diana was the best thing to have hit the Monarchy if it wanted to modernise.

of course, having the politicians and government actually function is unAmerican. The government serves as a diversion to the fact that the government is actually run by big business and the banks.

I would also add--look at the idiots that have been elected President of the US.

Dubious George is the best example.

At least the monarchy keeps the idiots in a position where they can't do too much harm.

Sybil - The idea of Lemmy is growing on me...

JoJo - I expect she'll be Kate as it's shorter for tabloid press purposes.

G - Nope. If you start wearing a crown people will think you are nuts. Fact.

Mahal - Quite so - you could have added Berlusconi. The idea of Lemmy is definitely growing on me given the 'competition'. He never invaded anywhere - well only with noise.

Richard - Welcome to my humble blog and pedantry forgiven as I was blatantly wrong. Sometimes the rabbit writes from the hip as it were. Maybe it could be argued that K of Aragon was the last Queen to be recognised as such rather like a right wing catholic traditionalist I used to know (now sadly dead) refused to recognise any monarch after James II but said that didn't stop him accepting cheques headed HMPG.

Minx - I've heard the conspiracy theory before but as to your carbs intake, bloody hell woman, you'll explode!!!

Laci - Ummmm gotta disagree here. I know the monarchy does little or no harm in practical terms but teh underlying principle is outrageously unacceptable. Yes Biush was an idiot but he was a time-limited idiot.

First, there was Reagan, then Bush I, then Clinton (who was the best of the Lot), Dubious George, and now Obama.

Obama is supposed to be Socialist, but I have yet to see any thing vaguely Socialist coming from his administration. Anyway, whatever form of socialism Obama may have foisted upon the American people has been thwarted by the new lot of Republicans. That will put the administration into a two year "lame duck" system.

It's better to have a parliament and have the figurehead be something which can't cause too much trouble.

Unfortunately, the US would probably make Italy look stable if it had a parliament with governments coming and going like teenage fashion.

Noam Chomsky said that in many ways Nixon was the last president to make any meaningful concessions to socialism: every president since then has torn down social safeguards and handed political power over to money-power, especially Bill Clinton, who deregulated the banks and created a bubble. It is exasperating that he is still, even in the midst of our present troubles, regarded as having presided over a boom-time. I think we should now be reevaluating his economic brownie-points.

I also forgot that the US electoral system and the scrutiny placed upon candidates means that the best people for the job often either give up, or aren't allowed to get very far in the process.

thedailyg-- I've been saying that Nixon was a liberal by today's standards, yet another point for that argument.

Clinton was the best in a long line of very bad leaders--that is an awful statement about US politics. I thought that Blair and Clinton were a better match than Blair and Bush, but I was wrong.

I'd prefer to have a permanent beauty queen running the show as official greeter and let leaders get on with running the affairs of state.

More pedantry I'm afraid WR. Berlusconi is many things: a crook, corrupt, an abuser of power (and minors), the world's most famous dirty old man, a slob, a friend of Tony Blair; but he is Italy's Prime Minister, not Head of State. Regulars at pub quizes (but probably not anybody else) should know that Italy's Head of State is its President Giorgio Napolitano.

His Grace is touched.

At least he knows his history.

Or perhaps pointing this out makes His Grace even more irritating to you.

Oh, and Prince William's Catherine will be the first Queen Catherine of the United Kingdom of Great Britain and Northern Ireland.