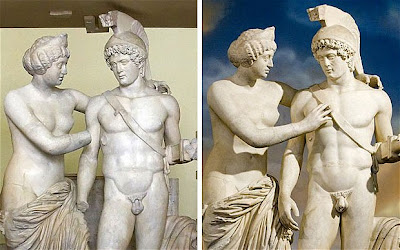 Now this is strange. Italian Prime Minister and all round disgusting creep Silvio Berlusconi has a statue dating from about 175AD of Venus and Mars in his office. It will be noted that the figure of Mars on the right has - erm - certain advantages over the same figure on the left. This is because Berlusconi has had Mars's penis restored to him at a cost of 70,000 euros (£59,500).

Apparently the new penis is equipped with a magnet. No, I don't follow that bit either. It will also be noted that Venus has re-grown her right hand, all the better to...

Oh never mind. Berlusconi had been hit by a tidal wave of criticism (and this in a country where the Prime Minister owns or controls a large swathe of the media thus avoiding those pesky contrary opinions by and large) for grandiosity, messing with antiquities and by contrast to neglect of various other national treasures, for example the site of the Pompeii excavations, in urgent need of attention. 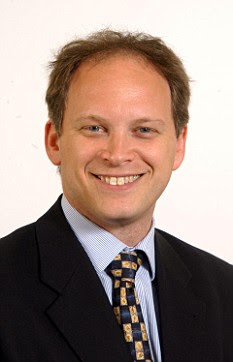 While on the subject of knobs, the above is Grant Shapps who is presently Minister of State for Housing and Planning. Until the last election, the rabbit was happily ignorant of the existence of Mr Shapps but suddenly he is all over the media like a rash. The rabbit finds him deeply annoying, and not just as another example of the tendency of politicians to look like Alfred E Neuman. It's his oleagenous smugness methinks.

By Way of contrast, the inaugural Golden Rabbit is awarded to the Bishop of Willesden, Pete Broadbent, who has had a huge amount of odium heaped on his head for some disobliging remarks as regards the royal engagement. You go bishop 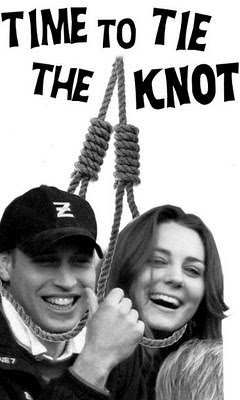 There goes my peerage! Hat Tip to Tony. I should add that this is a joke. The rabbit is opposed to capital punishment for the happy couple - or indeed anyone else.

Finally, above is a Catalan Socialist Party election broadcast (yes, it was official and not a piece of freelancing). You never knew voting could be such good fun, did you? Hat Tip to Laci the Dog.

The Knobs Of The World Are In Safe Hands

This post if full of knobs!!
Seriously- getting the penis replaced - with a magnet? What the ?!
I kinda think the Bishop was funny - and right!

I remember when Will's parents were getting spliced and there were the Royal Divorce memorabilia circulating, which I neglected to pick up. A couple of nice people, but doomed to failure. Charles should ahve married Cowmilla Parkthe-Rolls from the get go and Diana should have married some Hooray Henry and truly lived happily ever after.

I made sure I was fast asleep for the wedding (quite a feat given it was sort of late morning as I remember).

"Wake me when the nightmare is over, thank you."

BTW, I like Will and Katherine (why does Taming of the Shrew come to mind here?) and don't wish them ill. I hope his marriage is better than his parents.

Somehow, I think some of his mother rubbed off on him and this match will work.

Although, talk about messing about, Maj. Hewitt.

'Although, talk about messing about, Maj. Hewitt.'


i thought it was william she was marrying, not harry...

In your never-ending quest to inform your readers, you have just explained the meaning of the American phrase "chick magnet."

As for Venus' new extremity, she is the goddess of love, and it is a fact that for every knob there is a willing hand somewhere in the universe.

I laughed when I heard about the restored statues. I can imagine how the initial phone call to the sculptor went. lol

I was surprised and unnerved that Wills gave Kate his mother's engagement ring. It's not like Prince Charles ever bought that ring w/ any real love in his heart for Diana. It'd be one thing if theirs had been a loving union. I think it's a bad sign.

Im signing up tomorrow to work in the polling booths. Grant Shapps, sounds like a merger between a whisky firm and a german manufacurer of spirits, not that I would know anything about that.

noone can resist the Mrs. Hall!!!

@simplywondered--Maj. Hewitt was Diana's dalliance, which means she wasn't perfect. On the other hand, I believe William and Katherine have been shacking up for some time. There's hope they will be far more compatible than Will's parents.

If the scene depicts Venus distracting Mars from his duties it is ironically appropriate.

I don't see the fuss tbh, you can never have too much genitalia!

Tony - they are indeed. Especially now Venus has got her right hand back.

Sybil - There is a reason and I did read it but my brain has plainly rejected the information.

Laci/SW - I so don't want to have to think about Maj. Hewitt ever again.

Catchy - 'for every knob there is a willing hand somewhere in the universe' Tsk! Really!! I don't know!!!

JoJo - You've got me imagining the conversation in pidgin Italian. Probs best leave it at that...

Stephen - White Rabbit has a dentist by appointment. Maven, what is your expert opinion on Mr Shapps' teeth?

Alan - erm, you can. I saw a documentary on penis enlargement once (probs Channel 5 - they're odd like that). It was not edifying stuff.

My word! Poor Grant could probably eat an apple through a wire fence with those choppers!

Maven - What a wonderful expression! Consider it stolen by the rabbit for further use. Apparently the Shapps person is very independently wealthy - you'd think he'd spend some of it on at least a good scale and polish?!