completely bloody (as it were) bonkers... 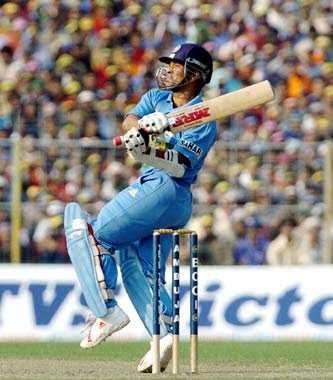 For the benefit of the uninitiated, the above is Sachin Tendulkar. For the benefit of the terminally not getting it, he is a cricketer. Well in fact he is a phoenomenally talented cricketer, former captain of India and one of the all time greats. But bear with me. This posting is NOT about cricket and even Tendulkar's prodigious abilities cannot begin to justify the gross out the rabbit is about to advise you of.
Our man has published his autobiography. So far so standard issue, I hear you say. Sportsman publishes autobiography. NO great surprise there. They all do that.
NOT IN BLOOD THEY DON'T!
Yup. In blood. The 'blood edition' of our man's auytobiography, which also includes unpublished family pictures and Tendulkar's thoughts about his career, weighs 37kg, measures half a metre square and stretches to 852 pages edged in gold leaf and costs a mere $75,000 (£49,000). Out next February, only 10 copies are being printed and they have all already been pre-ordered so if you were thinking of ordering a copy, I'm afraid they've already gone. There's no lunatic like a rich lunatic.
Let publisher Kraken Media's chief executive Karl Fowler take up the story. 'The signature page will be mixed with Sachin's blood – mixed into the paper pulp so it's a red resin. It is what it is – you will have Sachin's blood on the page'. Warming to his theme, our hero elaborates 'it's not everyone's cup of tea, it's not to everyone's taste and some may think it's a bit weird'. Erm, quite so. 'But the key thing here is that Sachin Tendulkar to millions of people is a religious icon. And we thought how, in a publishing form, can you get as close to your god as possible?'
Bloody hell (so to speak)......
As well as taking blood from Tendulkar, Fowler (who really, really should seek help) - erm - asked for a sample of his saliva and used this to create his DNA profile, which will be printed on a two-metre gatefold in the book. 'What you'll be looking at is his genetic makeup', said Fowler as the men in white coats came to take him away. All is not lost should you be desperate to throw money away: Kraken will also publish around 1,000 copies of a cheaper edition of the autobiography at $2,000-$3,000 (£1,300-£1,900), signed by Tendulkar, and with the DNA but no blood. There's also to be a 'cheaper' edition at $200-$300 (£130-£190). All to be published in time for the cricket World Cup next Fenbruary so get your orders in! 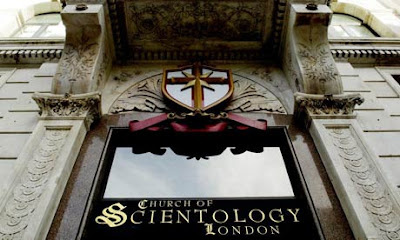 While on the subject of bonkers, John Dixon, a Cardiff councillor is somewhat in the poo and facing a disciplinary hearing after calling the Church of Scientology 'stupid' on Twitter. The exact quote was 'I didn't know the Scientologists had a church on Tottenham Court Road. Just hurried past in case the stupid rubs off'. Someone (could the 'someone' just possibly be the 'Church' of Scientology?) has complained and Dixon faces a disciplinary hearing. The Public Services Ombudsman for Wales has has referred the case to Cardiff council's standards and ethics committee, which will consider it in the autumn. It will have to decide if there has been a breach and, if it finds there has been, consider any sanctions.

At the risk of labouring the obvious, whatever happened to free speech? What he said was so mild - stupid. He didn't call the Church of Scientology a 'fraud' or a 'money making scam'. Not that I'm suggesting it is. Okay, I am.

The Government is looking for cuts. How about the waste of money involved in inquiries into councillors tweeting that something is "stupid"? OK Cllr Dixon could be criticised for not calling Scientology a fraud and for being too soft on them; but no doubt he was busy at the time. If the Public Services Ombudsman is causing inquiries into such matters, perhaps he should be cut too. Meanwhile the misnamed Church of Scientology will no doubt continue wasting public money with its ludicrous attempts to silent critics.

I'm a big fan of his work but blood?

That is pretty amazing and terribly weird.

Oh please! 10 copies? $75,000? Whoever bought those copies certainly deserves them.

and so myth begins or i guess, continues with y'all's cricketer...xoxoxo

With blood and genetic code, you can clone the guy. It might be a good investment for $75,000.

I have been trying to establish a new religous cult (for my retirement income), but the only followers I have thus far are blog followers and they haven't been sending me any checks.

Some friends and I got sucked into the Church of Scientology when we caved to curiosity and agreed to take their free personality test. The church was on near the dining hall at Emerson College in Boston and the nuts used to stand outside trying to get students to take the test. HOURS and HOURS later, we were finally able to extract ourselves from their grasp. It was amusing, but creepy.

What ELSE with regard to bodily product might be employed in the writing of a SEMINAL missive, I wonder?!?!

Humans have generally drifted so far from what is important, I doubt they'd recognize it if it bitch slapped them upside the head.

I try not to go there.

Mahal - Indeed. Dixon was on Newsnight last night but probably past your bedtime ;)

DHG - Weird barely does justice to it.

Catchy - Your cheque is in the post. It may or may not be true that L Ron Hubbard (what a stupid name!) either established Scientology for a bet and/or said the best way to make a million dollars was to establish a religion. Orwell once apaprently said something similar but didn't establish one - indeed specified that he was to be buried according to the rites of the Church of England. Which he was. Whether Hubbard got the idea from Orwell is seriously obscure.

JoJo - The scientologists used to hand around near my student hall of residence offering personality tests. I never went in but soemone I knew did and claimed Van Morrison was administering the test!

Little Flower - So you won't be ordering one?

The rock band KISS dumped their blood in ink for their 1970's comic book that was released. Ok, that wasn't ENTIRELY in blood, but it also didn't cost 75 Grand, lol.

Had It Been Norman Hunter ,It Would Have Been In Someone Else's Blood.

Heff - KISS did that? Why am I not surprised...

Tony - Ah! Norman Hunter of blessed memory! He akways seemed to have about 3 days stubble on the pitch which added to the effect. I remember some game or the other where I had a close range view of him. He did something that annoyed an opponent (can you imagine such a thing?) The opponent squared up to him. Norman just looked at him. The opponent slunk off. Norman grinned.

Oh and I ran Chinese spanner through online translator...