Wikileaks - The truth is out there - and it may be quite dull... 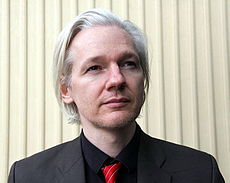 The above cheeky chappie is Julian Assange who is founder of Wikileaks and - shall we say - not the most popular person on the planet so far as the US government is concerned. The rabbit has refrained from commenting on the barrage of leaks of US government material hitherto but would comment that when Hillary Clinton etc complain that they imperil lives, the rabbit thinks they do protest too much. The leaks are really in the realm of the embarrassing only so far. And many of them are less than surprising. From a British perspective, it is unremarkable to learn that David ('Dave') Cameron and his understrapper Gideon ('George') Osborne are 'lightweights', albeit that the source of this opinion namely The Governor of the Bank of England is somewhat eyebrow raising. Equally that Prince Andrew is a boorish oaf hardly constitutes much of a disclosure.

Ranging further abroad, the US government assessment that it is hard to tell where the Russian government ends and organised crime begins seems a statement of the obvious. That the bloke with the pointy beard in charge of Saudi Arabia would like the Americans to whack the Iranians and that the Chinese would be prepared to abandon Kim Il-Bonkers etc and see Korean reunification is more surprising but not exactly a sensation. What is more interesting is the reaction to the fact of the leaks.

US senator Mike Huckabee would like whoever it was in the US government who leaked the above stuff and the rest executed for treason but there is a general consensus that Huckabee is not playing with a full deck. Another US senator, Joe Lieberman has struck in that his call for amazon to stop carrying the Wikileaks feed has been successful. 'I call on any other company or organisation that is hosting WikiLeaks to immediately terminate its relationship with them' yelped Lieberman. As the rabbit is neither a company or an organisation this blog will continue to carry the Wikileaks feed and there is a message for Lieberman from Spokane below. 'If amazon is so uncomfortable with the first amendment, they should get out of the business of selling books' commented Wikileaks.

However, the really weird thing is this. Assange is in some trouble in Sweden. On 20 August 2010, an investigation was opened against Assange in Sweden in connection with an allegation that he had raped a woman on the weekend of 14 August after a seminar, and two days later had sexually harassed a second woman he had been staying with in Stockholm. The evidence in relation to the rape allegation appears to be nonexistent and the harassment allegation tissue thin at best. Ha! cry the conspiracy theorists: we have a US attempt to frame and by extension destroy Assange here. As to what actually happened, I copy and paste from UK journalist Dennis Spence on the Charon QC blog: 'the complaint was lodged by a radical feminist Anna Ardin, 30, a one-time intern in the Swedish Foreign Service. She’s spokeswoman for Broderskapsrörelsen, the liberation theology-like Christian organization affiliated with Sweden’s Social Democratic Party. She had invited Julian Assange to a crayfish party, and they had enjoyed some quality time together. When Ardin discovered that Julian shared a similar experience with a 20-year-old woman a day or two later, she obtained the younger woman’s cooperation in declaring before the police that changing partners in so rapid a manner constituted a sort of deceit. And deceit is a sort of rape. The prosecutor immediately issued an arrest warrant, and the press was duly notified. Once the facts were examined in the cold light of day, the charge of rape seemed ludicrous and was immediately dropped. In the meantime the younger woman, perhaps realizing how she had been used, withdrew her report, leaving the vengeful Anna Ardin standing alone'.

For further details read here. So far so bonkers and it looks as if Assange was a victim of some - erm - curious Swedish approaches to sexual crime except it seems that the story still has legs. Assange's details was added to Interpol's worldwide wanted list last Tuesday under 'sex crimes' and says the warrant has been issued by the international public prosecution office in Gothenburg. Swedish prosecutors said yesterday that they would issue a fresh arrest warrant in respect of Assange, the last one apparently suffering from technical defects.

So, what to make of all this? The rabbit reserves judgement. The allegations look thoroughly silly and we have - sort of - been here before. The fact that they suddenly resurrect at this point with a serious international attempt to arrest Assange seems odd but, though the rabbit is partial to a good conspiracy theory as the next warren dweller, we shall have to see. Oh and allegedly the British police know where he is but are doing nothing. 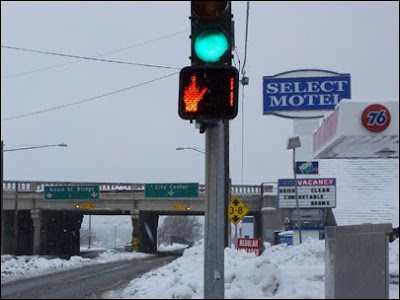 Here is the rabbit's response to Senator Lieberman via a street sign in Spokane, Washington. On a completely different topic, there was a wholly unexpected but nice comment on my piece on - among other topics - Len Shelley from Richard Purnell, who used to live with him. Here is the link to his obituary for Len Shelley and his wife Ang.
Posted by white rabbit at 16:05

So far what I've read has been pretty tame. Just as you stated. Let's see what he has up his sleeve on a major bank come January.

Spokane's been getting buried in snow, as evidenced in the photo.

Apparently Hilary called some of the heads of state to apologize and was told, "that's OK, you should hear what we say about you guys."

On the other hand, if these leaked papers are a matter of national security, we could find ourselves open to attack, or have our troops be targeted overseas.

PS In case you and/or your foreign readers don't know, Spokane is pronounced: spo-CAN, not spo-CANE. :D

i got pissed right off the bat..found out that the Obama administration stopped Spain for pressing charges against Bush...now that chapped my ass..
thanks for stopping by...your blog rolled too...

One Wikileak deserves widespread publicity is a deliberate attempt in May 2009 by the UK Government (and known to the US Government) to deceive the UK Parliament and people on the extent of its treaty-based cluster bomb ban. Cluster bombs are, of course, weapons that kill and maim many innocent civilians and relatively few combatants: hideously inhumane and politically counterproductive.
www.guardian.co.uk/world/us-embassy-cables-documents/208206?intcmp=239

I don't understand all the fuss about Assange. The US government has the alleged leaker, Bradley Manning, in custody and he has been charged with a crime and will be facing a hearing in the near future.

I think Assange is being attacked because he has been able to out-smart these governments through his tech-saviness. Governments don't like the Internet because they can't control it, and they certainly don't like people who know how it use it effectively. Assange is merely the host of a site where people can upload information to the public domain, not unlike many other sites which are not being harassed.

I admit to liking Assange. It does seem like the whole thing is a conspiracy against him, but like you said - we'll see.
Loved the Len Shelley poem! (And article.)

There was I thinking Assange was politically neutral & independent.when ,all along, he was a member of The Crayfish Party!

Thanks to all for comments and to JoJo for how to pronounce Spokane -I'd have guessed wrong on pronunciation.

Welcome to my humble blog Yellow Dog Granny - I've just found out what a yellow dog is - at least in US political terms.

Mahal - That is interestuing and I didn't know about it. Apology for lack of Hat Tip as regards traffic sign by the way. My bad...

Catchy - You have a knack for hitting the nail on the head eloquently and elegantly.

Sybil - The poem is fun. The poet lives near where I am about to move to in London so maybe I'll have to tempt him out for a beer.

Tony - I know! The Crayfish Party!! A fiendish conspiracy!!!

This is why as a rule I don't have sex with crazy women.

Incidentally, I have to say my eyes practically roll out of their sockets when I hear these hypocrites whingeing about the exposure of their cynical scheming. Wikileaks is only doing a tiny portion of a job that should be integral to teh machinery of politics: allowing citizens to understand politics instead of getting a simplified and cleaned-up version all the time.

err it depends on which version you're reading. i read a version where it was good old-fashioned sex without consent which is rape under the crazy british system too. i don't know what the facts are but mightn't it be sensible to work out what they are before we all decide what we think about it.

and if i interpret your remark correctly dailyg, then dismissing the complainant as mad doesn't help.

simplywondered: As presented here, she sounds crazy. I wonder what your superior source of information is; you don't say.

Nobody was saying rape is good - don't be so melodramatic.

"i don't know what the facts are but mightn't it be sensible to work out what they are before we all decide what we think about it."

You can't dictate those kinds of standards to conversation (whether online or face-to-face): people speculate until the truth is finally ascertained - or not - that's life. Nothing is ever known for certain.

I am not a judge or a newspaper so 'dismissing the complainant as mad' is not a problem; it's just some bloke's opinion among millions. She is just an abstract character to me; I claim no real knowledge of the actual person. I was really speaking generically. However, it does not seem unlikely that a crazy radical feminist might make such a specious rape claim.

Think about it: there are probably many public figures you have negative opinions of - how well-grounded are they really? What if you are completely wrong? Will you go around now making amends for every occasion when you expressed these views? It's impracticable.