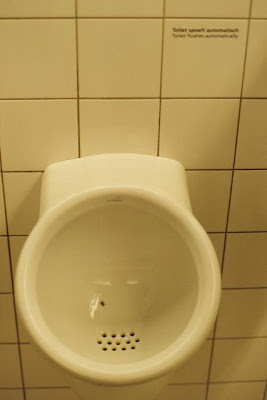 The rabbit has just got back from an exasperating and semicircular journey from London to Birmingham. No trains at Euston due to signal failure somewhere or the other. Yes says woman on information desk. There are trains from Marylebone. The rabbit hops off to Marylebone. There are no trains from Marylebone to Birmingham today.
'Why did they say at Euston that there are trains from Marylebone when there aren't?' enquires the rabbit.
'Different companies' says the man behind the desk as if this was a self evident and entirely satisfactory explanation for the misinformation. The rabbit enquires as to whether modern technology could possibly disseminate this information from train company and station A to train company and station B. Given the two stations are perhaps two miles apart, a carrier pigeon could do the job but perhaps e-mail or website linking would be quicker. The man appears to have no opinion on this matter. The rabbit can get a train via Oxford at Paddington he announces. They are one an hour and the next is in five minutes. Back to Euston to see how things are as the chances of getting from Marylebone to Paddington, buying a ticket and making it on the train in five minutes seem slight. Things are exactly the same as before at Euston. Absolutely no movement.
To Paddington and a grossly overcrowded train to Oxford and then change it was then. The above urinal is quite famous and is at Schiphol airport Amsterdam he typed changing topics seamlessly.
The significance of the urinal is that it is an example of what is known as 'nudge theory' which is apparently loosely getting people to do better things by subconscious suggestion. The approximate relationship of the male urine stream and where it is supposed to go is well-known. Result puddles and sticky floor and soles of shoes. the theory is that the presence of the insect image will get men to direct their urine streams at said insect, thus avoiding nasty messes on the floor.
This is nudge theory or 'libertarian paternalism' (sic) in action. The relevance of this is that nudge theory is about to be given a try by the British Government in some as yet unspecified ways. It apparently derives from a man called Richard Thaler and involves highlighting the best option, while still leaving all the bad ones open. Obama is apparently taken with this theory and Cameron is equally taken with it. Albeit that clunking nannying from the last Government grated, nudge theory sounds no better - just different. Manipulation vs Bossiness. Not much of a choice. Watch this space...
Posted by white rabbit at 18:07

The Trouble Is That When Your Pissed You See Several Flies........and still end up wetting the floor!

Having the fly on the urinal is a good idea. Brian's said that he'd aim for it too.

Sorry about your travel problems. That sucks. I don't suppose you ran into a sweet little bear from darkest Peru, when you were at Paddington Station?

Your journey sounds awful, but not entirely dissimilar to a couple I've had earlier this year! And to think trains are supposed to get even more crowded over the next few years!! :-(

BTW, any chance of adding law actually to your blogroll - you're already on mine? :-)

Can you put one on middle stump for us plz.

What the ?! Really?
That is hysterical!

Tony - You may think that. I couldn't possibly comment.

Michael - I had intended linking before your comment. I will do now immediately.

Stephen - Do you think it wouild help? More extreme measures needed I suspect!

Sybil - Yup. It's for real. Put on some male clothes and a false beard in Schipol and have a peek. The Dutch invented those ladypee devices so you can hack it! ;)

nudging (good)
nannying (bad - unless you are posh and want one for your kids)...
let's play 'spot the difference'

So it's better for men to aim slightly due North West of the drain?

It's always a party at your place rabbit!

People will get used to the fake insects and stop noticing them. This should be obvious. There is already a drain to aim for. The drain is more interesting to aim at than the fake insect, because you get a gurgling feedback.

I think someone needs a nudge direct to the cranium.

whenever i get nudged i almost always end up pissing on the floor.