Winter is here and the time is right etc... 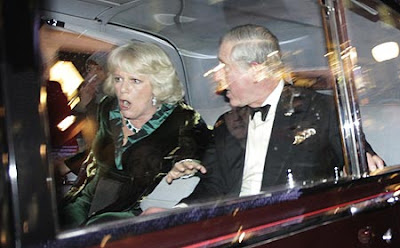 This has to be the photographic image of the week. London - where the rabbit is now due to return next Wednesday - seems to have decided that winter is here and the time is right for fighting in the streets. The heir to the throne and pal are attacked in their limousine on the way to the theatre last Thursday night to noisy universal condemnation. For overseas readers and those who have been fast asleep under a stone for several months, the issue was a proposal being voted on in the House of Commons that night to create a new framework for student tuition fees, potentially tripling them in some cases. The proposal was carried by 21 votes in the middle of scenes of general uproar on the streets. Interestingly, all the YouTube clips of the attack on the Charles and Camilla car have been taken down so here is what can be found online from something called Access Hollywood - intermixed with a lot of other guff for the benefit of the hard of thinking (after some advert).
The other 'celebrity' dimension of the day of rioting was that the son of Pink Floyd guitarist Dave Gimour attracted considerable odium after swinging from the Union Jack on the Cenotaph - that's the national war memorial overseas readers. He subsequently claimed he didn't know what it was. He is a Cambridge University student doing an - erm - history degree. 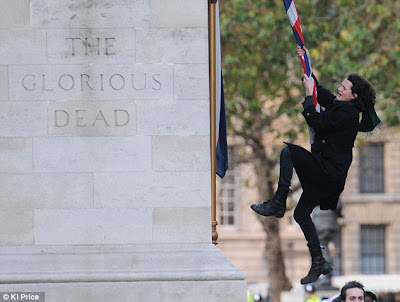 In the meantime and more seriously than either of the above, a student protester had emergency brain surgery after a police officer hit him on the head with a baton. This story has got somewhat buried in tthe froth about Charles, Camilla and son of Dave Gilmour. There is a general surprise at the extent to which the protests have spilled into violent or - perhaps more accurately - destructive behaviour. Of course this is the behaviour of a minority but the size and determination of the minority is somewhat surprising. Although finding monarchy absurd, I bear Charles no personal ill-will - the tragedy of his life is probably that he finds himself well into his sixties and still in a seemingly endless rehearsal for a part he probably has no wish to play. He would surely be happier as a gentleman farmer being left in peace to indulge such eccentric theories as he may hold - and there are many. The attack on his vehicle added nothing to anything like other outbreaks of deeply unattractive behaviour.

Of course there is a lot of standard issue huffing and puffing about the disorder - although so far as I can gather no police officer or bystander was seriously injured and there was nothing on the same scale as the November Millbank events. Of course there have been counter-accusations as regards police over-reaction - no doubt with considerable force (so to speak) in many cases - how a student comes to be in need of emergency brain surgery requires some serious explaining - which no doubt will not be forthcoming. Certainly the practice of 'kettling' seems a recipe for cranking up the disorder by giving people a sense of being trapped in a kind of cage which they then try to break out of as a fairly elementary response. Just two points for the moment: firstly, although the protests are about tuition fees I suspect that there are a number of other issues bubbling under the surface, which presently lack articulation. If the protests spill over from the narrow issue of tuition fees to broader issues then the government is in huge trouble. When the rabbit was a revolting student the approach to any issue was to look for links with other issues. Secondly, where is the articulation - and in particular the generalising of disparate issues - to come from? It may even be that the extent of the disorder is a kind of blind rage - reflecting the lack of a coherent process of linking. The English notoriously dislike theory but some theorising seems in order. Do not expect the quintessentially useless Labour opposition to provide any of it, though. There's only one song to end with...

We are seeing more and more use of "kettling" in the US, often times using nets to contain crowds of innocent bystanders in addition to protestors, and then hauling them all to dirty, temporary cages set up in vacant warehouses or maintenance areas.

This method was used in New Orleans after huricane Katrina and in New York at Pier 57 during the 2004 Republican Convention.

That's a dude swinging from the flag?! Really?!
Ick.

I'm not sure what kicking Charles and Camilla's asses would do ...neither one of them had anything to do with the vote.and the little prick swinging from the flag should be spanked..
I love Pink Floyd.

Catchy - Didn't know about the US kettling. It strikes me as a recipe for disaster.

Sybil - Yup. I had the same thought. Is that reallya guy?

Yellowdog - Yes, the Charles and Camilla thing was just bullying and nothing to do with anything. The little prick has already had a verbal spanking. It further emerges he may have been on acid - or some other drug - and he read Keats to the assembled cops...

'I fear thee, ancient Mariner!
I fear thy skinny hand!
And thou art long, and lank, and brown,
As is the ribbed sea-sand'

(That wasn't strictly necessary. It's just that I like it)

Wow! I didn't think the swinging person was a dude either. I hope David smacked him upside the head. It's sad that education cuts are being made. It's happening here as well.

Well, it may be old fashioned, but *I* bear them ill will. Just what exactly do they DO? Nothing. And who financially supports them? You do. I despise rich, lazy scum who do nothing for a living and get supported by poor people who don't get any choice NOT to support their lazy asses.

Off with their heads.

but it's even worse than camilla getting 'poked with a stick'! (love the fact the entire uk media have seized on this fab phrase) it now appears there was physical contact!!! it's getting spiritual - as if by touching the ex-wife of some grumpy posh polo-player who shagged then married some other posh polo player who happens to be the son of the queen, the proletariat [well, upper bourgeoisie] have sullied the crown itself.

gilmore junior has been charged with violent disorder and attempted criminal damage. to keats' reputation i suppose... they really want to get him! how sad that he can't behave properly like that nice young otis ferry who instead of demonstrating about the right of young people to an education goes for that incredibly serious topic the right to ride around on a horse looking stupid torturing foxes. why can't there be more like him? oddly, i don't remember any kettling when the posh folk were protesting on the streets....

could somebody remind me how this coalition is a breath of fresh democratic air after those repressive old labour boys?

(ps on the 'poked with a stick point, rabbit, i am surprised you haven't got the clip from 'now for something completely different' featuring the 'point-ed stick'.

Just A Taster .Much Worse To Come In The New Year i fear.....hey-hoy, after they wheel on the Water~ Cannons we are bound to have a water shortage come The Summer.....

Little Flower - We do our humble best :D

JoJo - Yup. He's a dude. Now he's a dude charged with violent disorder (which is serious shit) and attempted criminal damage (ie to the flag).

Daisy - Well they are exquisitely useless. And most have nothing to be said for them as personalities either. The Queen (sic) and Charles have some demented sense of duty I suspect but the rest are just a collection of not very bright, not very pleasant freeloaders.

SW - Perhaps this is a reverse of being touched for the 'King's Evil'. Would be really...

I have been watching the doings over there with interest. I thought the Gilmour kid's not knowing what the monument was, was a crock of shit, too.