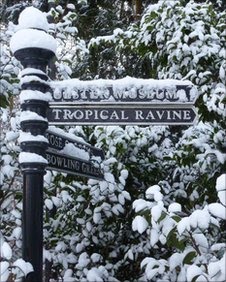 Well I've effected the move back to London. It was a bit of a nightmare as the rabbit and removal van and two nice Lithuanian guys (not Polish) were whizzing nicely down the M40 until we found it was closed down at Juncytion 11 and we were stuck in an enormous tailback which took about an hour and a half of stop and crawl to get through. The knock on effect was hitting the evening rush hour in London and another crawl. Someone from the agents stayed behind to give me the keys, which was nice, and unloading happened very rapidly. My furniture etc is coming out if storage on Sunday so i'm sleeping on a blow up bed for the moment! To be honest, I don't like the flat much but I had to do something and have a six month break clause, which I will invoke. It's good to be back in London, though - apparently pursued from northern parts by another very cold front (see pic from Belfast above). Here are a few more photos of the snowy weather from the BBC website. 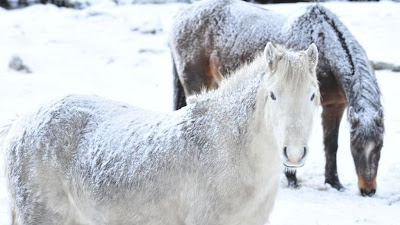 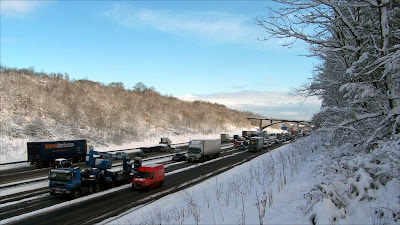 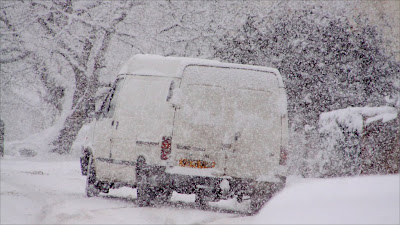 Welcome to your new digs!! So the place you are staying now will only be temporary till you find a better apartment?

Driving a Conestoga through snow can be slow and dangerous. Do you know of the Donner family travels? Thankfully you made it to your destination without needing to feast on the Lithuanians.

Sounds like it all worked out, though, so that's a plus. :)

[as they say)"You Brought The Weather With You"....!
I hope your settling in well.I got one of those blow-up beds for the ruin in Italy £4 from Tescos in Halifax + £10 for an Electric blow-up thingy.
Also,Worth keeping a spare in the car, till it stops snowing!

Thanks again to all for kind thoughts. It's been a bit frenetic but I will try and get around to visiting everyone's blog soonest.

JoJo - Very temporary as in 6 months. I'm not staying.

Catchy - Re Donner - Google means never having to say you don't know ;) I'm glad I didn't have to eat the guys. they looked a bit too wiry to be a good meal.

Shirley - Yup. I'd settle for 80 degrees and sunshinbe. I really don't see the apppeal of this weather.

Tony - I've bought a blow up doll to share the blow up bed (joke!)