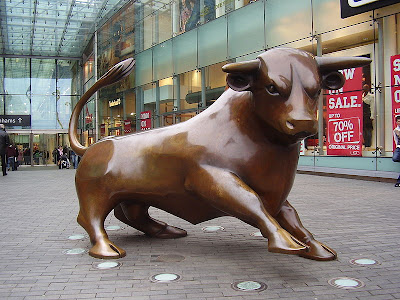 I'm not at all sure of what I think of blogging as diary but I seem to be doing it increasingly. I have now lived in Birmingham for just over a year. I like it well enough - better than I expected - but don't anticipate remaining here forever. My roots and my fractured family are elsewhere. But it is okay for now.

Here is a verbal picture of Saturday lunchtime in central Birmingham, I start by going to buy a newspaper. The asian guy behind the till asks about my Barcelona shirt. Can I spell Barcelona? he asks. I demonstrate that I can to his satisfaction. Why not support an English team? he asks. I say that I do. I then give him a lecture on the Spanish civil war, Catalonia and anti-fascism. He looks as if he wished he hadn't bothered asking. I move on before I am in danger of launching off about Orwell for good measure.

On the subject of football shirts, most shirts seen in the street are Birmingham City as opposed to Aston Villa ones. The average working class Brummie is a bluenose (for overseas readers and the footballingly challenged, a bluenose is a person who supports a team who play in blue - as Birmingham City do). Villa is seen as regional and aspirational and nothing much to do with the average working class Brummie, I think.

I live just round the corner from the Birmingham Hippodrome . I haven't been to see anything there yet - basically because there hasn't been anything I have wanted to see. I can pass on Connie Lingus - sorry Fisher and The Sound of Music, thank you. But today there is street theatre on the pavement outside. The street theatre involves young women with hula hoops and loud music. A street person makes his way unsteadily toward the entertainment, can in hand. He is grinning broadly and attempting to gyrate his hips as if in possession of an invisible hula hoop. I move on. I pass through the Bullring, which is at the corner of High Street and New Street and has apparently been a market since the middle ages. Now it is the point where a collection of shopping malls intersect. Children climb all over the Bullring bull (above) and love to be photographed on it. I head down the High Street.

As usual there are stalls. One has a large display of Korans (or more accurately Qur'ans) on some sort of Muslim evangelical foray. There is often a street evangelist here as well (but not today). I once saw the street evangelist launch into a pair of asian men who were wandering about minding their own business. 'You muslims' he announced. 'You are all murderers! You can only be saved from your sins by the blood of Jesus Christ!' I reflected that he was plainly not getting the hang of the inter-faith dialogue thing and moved very rapidly out of the way. I expect he got away with it, though. He is one seriously big guy.

Next to the man with the Qur'ans is the Socialist Workers Party. As always, as well as a stall they have a megaphone and a petition. The petition is in relation to the Tory cuts. Unsurprisingly, they are against them. The Hippodrome street theatre has a second spot on the High Street today. It appears to involve people dressed as kangaroos on this location. I move briskly past them and the guys selling great fistfuls of inflatable novelty items.

Then on to my weekly treat - fish and chips at John's Fish bar, a place I never go in on a weekday because it is right by the courts and full of clients. They serve a reasonably modest portion for £1.90. This is a bargain. They have a thing about chips round hereabouts (that's fries to American readers). A very kind friend put me up in these parts on and off for much of the first half of last year. One night he suggested fish and chips for dinner. I agreed. We went in the fish and chip shop...

'Two fish and one large chips' he said. 'I have a weakness for chips' I announced, not at all sure that one large portion would be enough for two.

The guy shovelled about three large scoops onto the wrapping paper. Then he paused momentarily. Then he shovelled another couple of large scoops. Then he paused again to admire his handiwork. Then he shovelled on another scoop. And then another. Then he finally decided that perhaps the accumulated chip mountain would be sufficient unto our needs. Two of us could not finish the chip mountain between us and the rest was fed to the deer on Cannock Chase. Deer like chips, it emerges. Tonight I'm off to somewhere in Warwickshire for dinner. here is some helpful stuff on hula hooping.

What is strange about your lunch vignette to me? You were walking. Who walks to get their lunch? This is why we're all fat in the US.

You meet more interesting people during a walk to lunch that I do in an entire month.

I followed the Cannock Chase link. I love the AONB acronym. I may start using that when I speak of my daughter's farm with its forests, meadows, and wildlife.

Working on the road across this great big world
I've been rolling like a stone, I never get back home
Yes, I've been long-gone
And boy, I've got the Birmingham Blues.

Been across the ocean to the south sea isles
Yeah, I travelled to the east and west for mile and miles and miles
And I've been long-gone
And boy, I've got the Birmingham Blues.

CHORUS:
Across the world I've seen
People and places
Could be the same
But with a different name.

I wouldn't change the things I do for anything
But I'd just like to hear the message of the streets again
Give me a ticket
Cause boy, I've got the Birmingham Blues.

It may be kind of homely but it sure is sweet
Industrial Revolution put it on its feet
But it's a long, long way
Boy, I've got the Birmingham Blues.

I'll go and stay awhile and all the folks I meet
They'll say "You won't stay long, you got them travelling feet
You'll soon be long-gone
'Cos boy, you got the rest of the world blues!"

Yea Hula-Hooping is back in fashion.I saw a brace of hoopers entertaining us pub drinkers in Manchester a couple of weeks ago.What goes around comes around i guess?
On the subject of dodgy politics, did you see this in yesterday's Guardian about the EDL march in Bradford?
I was sat on a train a few weeks ago travelling from Leeds to Bradford .4 blokes wearing identical "EDL on Tour" teeshirts got off at Bradford station.....on the whole,I 'd rather be in Barca!

Holly - I could still lose a few pounds! I am working on this...

Catchy - You could declare yourself an AONB. But then you would probably get coach parties of tourists turning up to have a look. ;)

Tony - I remember hula hoops from when I was at primary school. The EDL caused a fairly major ruck in central Birmingham a while ago and much consequential business for lawyers...

I do want to pronounce it properly now that it is part of my vocabulary.

I used to be very good with the hula hoop in my younger days, but I haven't used one since my daughters were children.

What abgreat walk through Birmihngham, long time since I have been there. In my younger days I had a box at Villa right on the half way line, had it for three years. I like the decription of the chippy, it seems to be the accepted way of fulfilling the chips order these days. Mountains of chips, which Tilley our dog, prays to incessantly as they languish on the kitchen worktop, she only moves when the remaining un eaten chips are decanted into her bowl.
Hard luck yesterday I'm off to show My Beautiful Dammen United now, I've tried to explain about the club and cloughie, but she will just have to see it in the raw as it were.

Deer love chips. Well, they eat just about anything that isn't meat and manage some of that through grubs in apples, etc – they aren't vegetarian on principle. I suppose most things are better than bark or bracken. I once put out some broccoli and chips for them assuming they go for the healthy green broccoli first. In fact they are no more likely to do that than the average human teenager. The chips went down in no time. The broccoli went eventually.
AONBs have the same status as national parks, but are usually lowland and smaller. Cannock Chase AONB is 69 square kilometres (27 square miles) yet still manages to have at least 800 deer. The major predator by the way is the motor car – approximately 130 deaths per year.

If you ask me, the street guy is a damn entrepreneur. I would have given him some fundage.

oh i remember the fish and chip night. lol
must be quie some time..and deer love apples too ..
much love