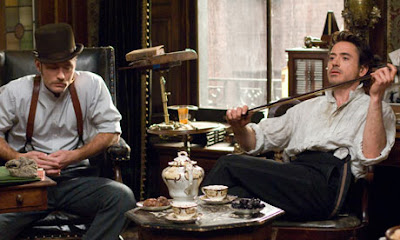 Continuing my burgeoning non-career as a film critic, I report that I went to see Guy Ritchie's Sherlock Holmes last night. Confessing myself generally underwhelmed by Guy Ritchie, my expectations were low. I was pleasantly surprised. It's not at all bad.

The trouble with any film set in London is that I have lived or worked in the usual - erm - sets. The opening had me thinking, okay that's Middle Temple Lane. It must be said that the re-creation of Victorian London is very well done. The final confrontation is set on a half-built Tower Bridge. Researches (okay - googling) reveals that Tower Bridge was opened in 1894 which dates the period portrayed pretty accurately.

We have a very unconventional Sherlock Holmes portrayed here. He has no deerstalker, hardly smokes a pipe (best not to flaunt that sort of thing - theer may be children watching) and the one he does smoke is not the calabash of tradition. He also has a sideline as a bare knuckle fighter and has a - sort of - girlfriend. To further complicate matters, his sort of girlfriend is a sort of criminal. There is - unless I over-interperet things - one rather obscure visual reference. At one point Holmes is rescued by his sort of girlfriend. We see him draped over a sofa in a garret. Unless I am mistaken, the scene is a straight lift from Henry Wallis's Death of Chatterton (see below).

And the plot? Well the villain of the piece is a Lord Blackwood (why are villains always named black something? Like in the old westerns the bad guys wore black hats. Why not call him Lord Manboobs or somesuch and confuse the hard of thinking?) Lord Blackwood is hanged for all sorts of bad deeds and pronounced dead by Watson (traditionally Watson is portrayed as a bit of a dolt but in another break from tradition Watson is actually rather bright) but breaks out of his elaborate crypt to general alarm. One tiny note of factual criticism: executed prisoners - even aristocratic ones - were buried in the prison grounds - not in well posh crypts. Lord Blackwood is into the black arts and wants to take over the world - including amusingly re-colonising the USA. He fails. If you want to know the rest see the film.

The script actually works largely (see comments on Avatar). The dialogue is crisp and zingy. The action is that of a far more physical Holmes than ever portrayed before. This makes sense. It is visual media not the written word. Different considerations apply. 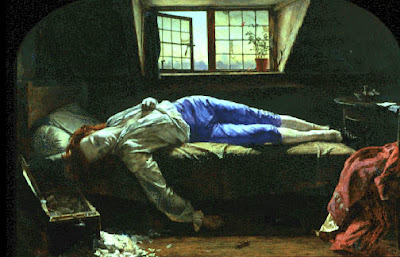 A parting grumpy old man type enquiry: why doesn't anybody listen to anyone these days? I mean literally. Anyone employed to deal with the public seems to find it too much effort to actually listen to what is being said to/asked of them and accordingly focuses out of any attempt at dialogue and takes a guess at what the latest interruption from doing nothing is saying. Unpicking the mistaken guess involves more dialogue than paying attention in the first place...

And, on that note, a happy new year to one and all!

Sounds to me like they went back to the stories instead of just older visual versions. He was a bare knuckle fighter when he first hit the page, and Watson was fairly fresh out of the military - smart and active himself.

I used to read those stories ragged.

Listening requires concentration which is rarely found these days. Distractions are the norm and concentration times reduced to seconds.

That is also why Holmes and Watson have been recharacterized as action figures, because audiences can rarely concentrate on films with good dialogue.

Your last paragraph reflects my experience with goverment officials, generally when I've interrupted their coffee and doughnut time - 5 minutes into the work day.

I'm gonna do my best to convince G to see this with me at some point this weekend. I'm a fan. Of Arthur Conan Doyle, of Guy Ritchie and of Robert Downey, Jr.

Its a lost art, listening, people are too much in a hurry to tell you about them. Im still with Basil Rathbone on the Sherlock thing, but it must be great to see all the places you know in a film. Trouble for me is that I would be shouting " see that window, that was my office""
Happy New Year to you too WR

(i will never think of sherlock holmes the same way after this film!)

(btw, i agree with you completely about the lost art of listening.)

And a Happy New year to White Rabbit!

I'm looking forward to seeing this film, but i will have to wait until it has finished in the cinemas, I can't watch films in a cinema too many irritations.

I spend my professional days listening, not only to what is being said but what is not being said. It is a huge part of my work. I just wish that some of the morally challenged that I work with had an attention span longer than a gnat.

I like Robert Downey Jr. a lot and the coming attractions I saw looked great.

Happy New Year to you too, WR.

Catchy, (also Savvy, Findon) - Yes but I don't think it's just a public sector thing. I blogged a while ago on the use of language as a means to defeat communication. The public sector obfuscates (as in 'predictors of beaconicity') and the private sector infantilises (place an order in a fast food outlet and listen to the rubbish you are spouting).

St Jude - Very nice to have a saint dropping in. I believe you are the patron saint of hopeless causes. Boy are you in the right place.

Earl/Mike - It is worth a watch IMO.

JoJo - Happy New Weir back to ya (I wonder how many people know what we are babbling about!)

Little Flower- Beware the evil Lord Manboobs! Actually, I think I may have invented a comic caricature of our putative new Prime Minister David Manboobs. I work on this...

you know I used To live + work in London? So I have the same problem with London - shot filums.
In any case,Johnny Depp & Sweeny Todd has kinda spoiled all subsequent London Movies,If it dont contain lots of Blood & lots of Singing it doesnt seem real to Me!(damn this hangover!)
Yea.I agree about the listening
Have A Happy Cameron-free New Year !

Having had to listen to the Internal Revenue Service this morning, I can only hope I listened well. What the devil is a Recon Unit. I picture black helicopters now. (There it is again, a reference to black,so sorry.)

Loved the film. And it is hard for me to watch films shot in the San Fernando Valley. Like, get it right, like, you know what I mean? Whatever.

The New England Patriots and Los Angeles Chargers are the only NFL teams without a quarterback on their rosters that started a game for them last year. Auburn has moved all of its summer courses to remote instruction, and it has combined spring and summer commencement and moved them to Aug.

Secretary General Antonio Guterres is expected to focus on efforts to fight the pandemic, peacekeeping Coach Outlet Clearance missions and fostering unity between the non permanent members and the five permanent ones.. Kim Jordan Shoes For Sale custom look was toned down perhaps for the wedding thanks to its longer than usual hemline and amply covered Cheap Yeezy Shoes Sale bust.

And he said, Brian, I sorry Cheap Nike Air Force 1 I upset you by showing you that "And I said, not upset, Freddie, except to realise you have to put up with all this terrible pain And for the final two years of his life, Freddie lived in almost total seclusion.. "It very interesting that so far, the majority seem to be coming from Europe, and this is Yeezy Shoes For Sale in part I think because there was a focus on stopping travel from China," she said..

I think there wasn't enough information.. 1 pick Joe Burrow.Expect the first round to contain plenty of wide receivers, offensive tackles and cornerbacks, but be top heavy with quarterbacks.Here a look at the players who could be selected in the first round on April 23, using the draft New Air Jordan Shoes order as it currently stands:LSU quarterback Joe Burrow passes against Clemson during the CFP national championship game on Jan.

This prompted a scorching, sarcastic public Air Force 1 In Store backlash from Michael Harriot, a columnist with the black politics and culture site The Root, aimed right at Sanders supporters. "I'm just proud of him. Source: APAs the clock struck midnight, buildings, streets MK Outlet and bridges across the city's centre were lit up in a celebration recognizing the landmark moment.Cars queue up at toll gates to leave the city on Tuesday night..