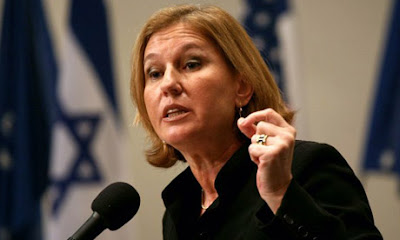 Q: When is a war criminal not a war criminal?
A: When the war criminal is a former Israeli minister on a visit to the UK.
The individual above is Tzipi Livni, Israeli Prime Minister during Operation Let's Butcher Lots of Natives Because We Can - sorry Cast Lead. Westminster Magistrates Court issued a warrant for her arrest for war crimes under the 'universal jurisdiction' applicable for war crimes. Annoyingly, she was - contrary to belief at the time - not in the country after all so the warrant could not be executed.
Predictably a volley of toys flew out of the pram from Israel. Whinge. Whinge. Not fair. Whinge.
The British response? Capitulation. David Miliband, Foreign Secretary and Hillary Hottie (see below) simpered that the government was looking 'urgently' at ways to change the law. Some little squirt called Ivan Lewis, a foreign office minister, announced that 'this must never be allowed to happen again'.
Why not?
There's a place for Tzipi Livni in the next cell to Radovan Karadžić at the International Criminal Court at the Hague. Below is some of her handiwork as actually caught on Israeli TV.
Posted by white rabbit at 12:09

All I can do is sigh. Asking myself the same age old question, "why can't everybody just be cool and play nice".

What is "whinge whinge"?

JoJo - It's an Australian word. I copy and paste from wiktionary:

'A cry; A complaint; To complain or protest, especially in an annoying or persistent manner'