Blair as psychopath and narcissist 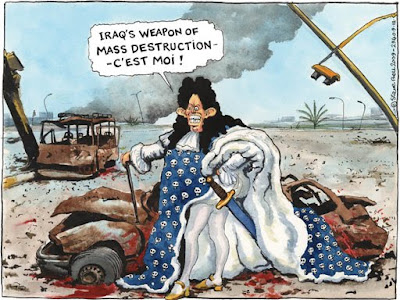 'Psychopaths are glib and superficially charming, and many psychopaths are excellent mimics of normal human emotion; some psychopaths can blend in, undetected, in a variety of surroundings ... There is neither a cure nor any effective treatment for psychopathy; there are no medications or other techniques which can instill empathy, and psychopaths who undergo traditional talk therapy only become more adept at manipulating others'
'Although most individuals have some narcissistic traits, high levels of narcissism can manifest themselves as a pathological form as narcissistic personality disorder, whereby the patient overestimates his or her abilities and has an excessive need for admiration and affirmation'
I have theorised for some time that Blair is a psychopath and a narcissist. See the definitions above via wikipedia. 'Glib and superficially charming' check ... 'excellent mimic of human emotion' check ... 'excessive need for admiration and affirmation' check ...
Plus psychopaths are incureable and untreatable. Here's the proof in the particular case. Blair has announced that he would have invaded Iraq even without evidence of weapons of mass destruction and would have found a way to justify the war to parliament and the public. This information was given quite freely to someone called Fern Britton on BBC television. It remains to be seen whether Blair's evidence to the reverting-to-type-as-per-expectations-after-a-promising-start Chilcot enquiry is quite so public. Sure, outrage can be cheap but there's a point here: a lot of dead people who otherwise would not be dead. The justification always was that Saddam was in breach of UN resolutions as regards weapons of mass destruction. As it turned out - surprise, surprise - there were no weapons of mass destruction. Oops!
Someone called Sir David Manning, a foreign policy adviser, told Blair in March 2002 'I said you would not budge in your support for regime change, but you had to manage a press, a parliament, and a public opinion which is very different than anything in the States'. In July 2002, Blair had told Bush he was in favour of regime change but public opinion needed a bit of duffing up to get in line (well he didn't quite put it like that but you get my drift). So it was a done deal long before the WMD pantomime as acted out before the UN by the hapless Colin Powell and others. We were lied to. And look at the shambles that followed - and continues to this day.
As an attempt at antidote here are Jefferson Airplane with We Can be Together, from the Volunteers album, the first popular song to demonstrate to the mainstream that mother can be half a word. Curiously one line is 'in order to survive we steal cheat lie forge fred hide and deal. What does fred mean as a verb as used here? Also, the very rude word is preceded by the words 'up against the wall fred'. Anyone with any ideas what is going on here?
Posted by white rabbit at 15:46

Well, that's a relief. You can never be too sure in a John Ashcroft
world! In one of RCA's many attempts to censor the Airplane they
wouldn't allow them to print the word motherfucker in the lyric sheet
to the Volunteers album, so the band made it "Up against the wall Fred"
instead (with all due respect to any Freds among us). From then on,
Fred was their substitute word for fuck.

The Sheer Arrogance Of The Man Is Amazing.No Doubt He Will Walk Away From This Enquiry Still Smelling Of Roses......

savannah - what an erudite answer! All is clear :D

So far the "inquiry" or show whitewash has avoided serious questioning of the witnesses, none of whom are on oath. Such questioning as there has would embarrass a pupil straight out of Bar school. On top of that it has agreed to B Liar (who was happy to discuss the matter on BBC television in an attempt to justify his disgraceful conduct) giving his evidence in secret. Whom do they think they are fooling?

Narcisism has reached pandemic proportions here in US... It frightens me. Sigh.

Do you think he's as bad as Bush? It's mind numbing, the so called leadership in the world.

Good to know that trivia about JA. I just assumed they were all stoned and talking about Fred Flinstone or something. :-)
Cheers,

No one is as bad as Bush. Well, Hitler maybe.