Things to do in London on Christmas Eve 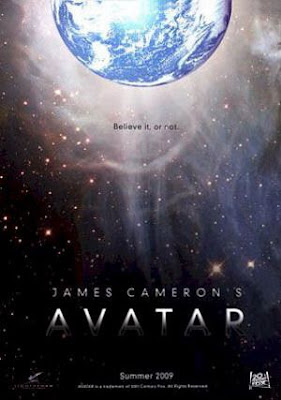 On Christmas Eve, I went to see Avatar. I'm not sure if I'm qualified to be a film critic as I regularly crash and burn on Earl's Bug Eyed Quiz (link to left) when the topic is movies - I don't cheat - I try to come bottom doing my best as opposed to deliberately messing up - and I usually do come bottom! But here goes. The director, James Cameron, is noted for directing Titanic, of which it was said with some justification that they spent $120 million (or whatever it was) on special effects and ten cents on the script. Rumour has it that something similar happened as regrds Avatar.

Let's get it out of the way. The special effects are stunning and well worth seeing Avatar for on their own.

The storyline? Well it suffers from metaphor overload. Just about everything is nodded to in a clunking sort of way. It starts off vaguely reminiscent of Apocalypse Now or any other Vietnam film you can think of with the choppers warily overflying the dense vegetation. Clunk! A nod to Vietnam. However we are not in Vietnam. We are on a planet called Pandora - as in Pandora's box (geddit?).

The Earthlings are on the most hostile environment imaginable. The atmosphere is rapidly fatal without breathing equipment. Everything in the natural world seems dedicated to - and with a talent for - killing them. Avatars are created to put the sort of human - apart from being blue, about twice the height of the average person, tiger striped and possessed of tails - tribespeople at their ease. The tribespeople are known as 'the people'. The objective is a precious natural resource the people are living on top of. At this point the metaphors are flying thick and fast. Everyone else who is invaded/occupied and is pissed off about it - let's think Iraq/Afghanistan. Clunk! Indigenous people unwittingly sitting on valuable resources. Clunk! The rainforest. Clunk! The native american - these savages are noble savages and have a lot of the characteristics of the native american - their language sounds similar too. Nod to Rousseau. Clunk!

I'll leave the plot alone - go see if you want to know it. Nuanced it aint. It has a wildly improbable love affair. The use of overwhelming force by the Earthlings (or 'Sky people') - we are in shock and awe territory here. Clunk! And in the final stages an avalanche of New Age/Mother Earth guff. At this point the metaphorical clunkometer is blowing off the wall. Clunketty Clunketty Clunk!

Maybe twenty cents on the script. Plus it's a little over long. Go and see it anyway. The special effects are worth the trip. Plus you get a free pair of 3D glasses.

After the cinema, we repaired to Jimmy's - a Greek restaurant in Soho and of some fame. It's in a basement on Frith Street - also home to Ronnie Scott's and looks as if it hasn't been decorated since about 1960. My dinner companions, being American and Hong Kong Chinese, had never heard of Jimmy's but soon got the hang of it. After the mezzes, I had Souvlaki washed down with Cretan red.

And so to bed, as Pepys used to write. Well sort of ;) 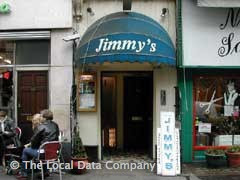 I had heard the script was of full of politically correct propaganda, but I wanted to see it for the special effects. I forgot it was in 3-D, so that leaves me out since I have little depth perception and don't see 3-D images from those idiotic-looking glasses.

Greek food reminds me of a memorable trip to Athens - you'll very much enjoy that post in my memoir series.

Ha! My sister was just talking about this movie... Her sons wanted to see it on their holiday visit. This is how I remain, ever so delicately "in the loop".

I like the CLUNK review and CLUNK O METER! funny!

So, WR, what's the film Avatar about? Long ago I realised that flash, bang, wallop special effects are used to mask a weak plot.

Well I'd still like to see it, but I have to be honest i am not as brave as you, I simply can't go to the cinema any more, I am that grumpy 'old' woman who sssh's everyone and gets uppity with the people munching sweeties in rustly wrappers. I'll wait for the DVD or Sky box office

James Cameron is a vile person and I never saw Titanic either.
10c on the script.
Before you decide that's a dumb reason to avoid a film, let me just say 'Roman Polanski'.
Thank God RP got The Ghost in the can before he was flung in the slammer.
Let me robustly recommend reading the novel by Robert Harris.
Just loved it.
(followed you here from DaisyDeadHeads)
Feliz Navidad you RedNeck.

A lot of my FB friends went to see Avatar over the weekend and all loved it. I'm not that interested in it though. That restaurant sounded great though. Never had much in the way of Greek food, other than Greek salads and stuffed grape leaves, but I love those!

a great achievement to take some hong kong chinese to soho and fail to eat chinese!

Ever tried getting Brahms and Liszt while still wearing your 3d glasses? You may even start to see some blue, striped creatures of your own. Well, what do you expect at the fag end of the year - wit?